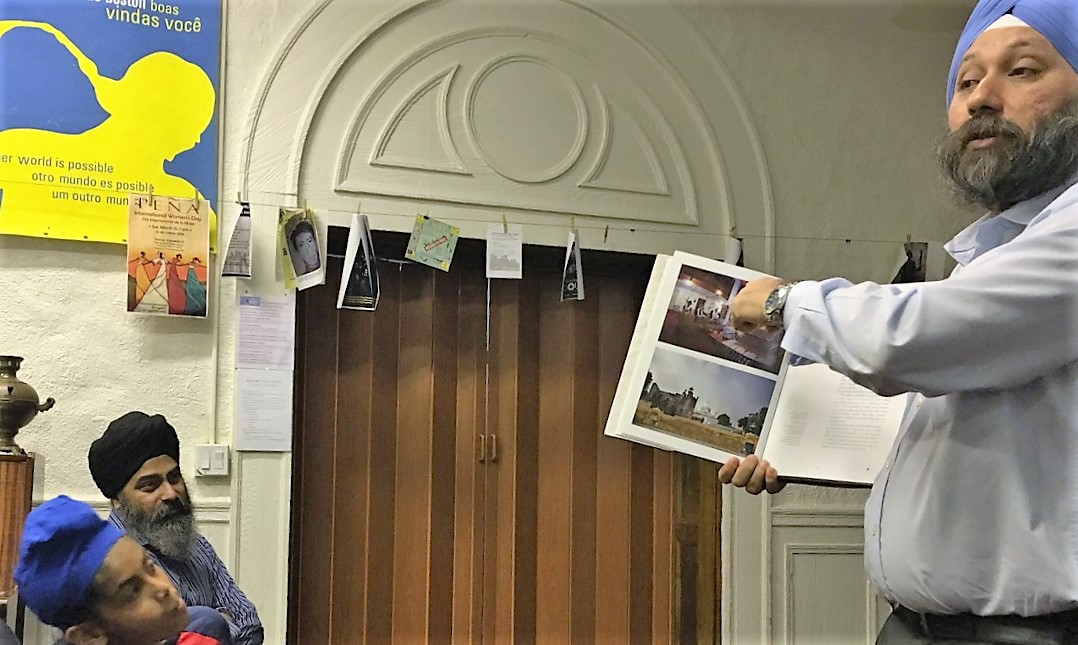 Amardeep Singh talks about his travels in Pakistan at the E-5 Center in Boston. Photo: Beena Sarwar.

If you could visit any place in Pakistan, where would you go?” asks Amardeep Singh each time he gives a talk to introduce his recently published travelogue Lost Heritage: The Sikh legacy in Pakistan.

The question, aimed primarily at members of the audience who are Sikh, invariably elicits two answers: Sikh holy places. And the desire to see their ancestral village. It was the same in Boston on 18 June 2016 at the E-5 Center, where Singh gave his talk. He understands the responses all too well. After all, he too once had the same “myopic” reasons, as he says, for wanting to go to Pakistan, which he considers his “homeland” – land of his ancestors and the site of many of Sikhism’s holiest shrines like Nankana Sahib, birthplace of Guru Nanak.

When Singh finally did fulfill his dream of visiting the country in 2014, he had an epiphany halfway through his solitary trip that changed the meaning of his travels. He realised that reducing Pakistan to religion was doing a disservice to its people and heritage.

The process may have begun earlier, when Singh applied for a visa at the Pakistan embassy in Singapore, where he has lived for the past 16 years. When the visa officer handed him back his passport, Singh refused to take it.

“I am going to my homeland for the first time,” said Singh, who was born in Gorakhpur, India, in 1966. “And you want to restrict me to ten days?”

The officer laughed and said he would increase the visa duration to 30 days. Emboldened, Singh pushed further. He wanted a visa for the entire country, not just two or three cities, and he wanted it to include Pakistan-administered Kashmir – the term he prefers to use rather than the loaded ‘Pakistan-held’ or ‘Azad Kashmir’. Singh also suggests using such neutral language, for Indian-administered Kashmir as well in an attempt to convey an acceptance of the reality as it stands today.

Singh is “deeply grateful” to the Pakistan government for granting him a 30-day, non-police reporting country visa (rather than city-specific one) – facilities normally denied to most Indian and Indian-origin travelers. Pakistanis who travel to India are also given city-specific visas that limit their movement.

However, the story of the metamorphosis of a corporate banker into a photographer and travel writer starts even earlier. Despite his 25-year banking career, Singh was never a “corporate junkie”. Even while working with American Express first in Hong Kong and then Singapore, as head of revenue management, he undertook many solitary trekking holidays in remote, far flung areas in India, Tibet and other places. Then there was his love for history and travel that led him to devour travelogues like British era explorers like William Moorcroft (1819) and Alexander Burnes (1831), and later accounts like Alice Albinia’s Empires of the Indus: The Story of a River.

Those experiences – travel with little contact with the outside world, reading historical accounts and travelogues, photography, and writing – he says were “God’s way” of preparing him for what he ended up doing. The Pakistan ‘pilgrimage’ that he initially started with, his life’s pursuit, became not the culmination of a dream but the starting point of another journey.

Historical traumas like the cataclysmic 1947 partition of India with its ensuing bloodshed produces a first generation that doesn’t talk about it, observes Singh. The second generation is lost. The third, to which he belongs, goes in pursuit of lost stories.

His father was born in Muzaffarabad in the Western-most frontier of the former princely state of Kashmir that both India and Pakistan lay claim to and which in turn claims azadi. Singh turned up to try and find his roots in Pakistan in 2014 like a wanderer on a pilgrimage, carrying three pairs of clothes, his camera, and the contacts of a few Facebook friends.

In Pakistan, Singh says that he met and connected with 14 Pakistanis who were on a similar pursuit, to discover their heritage. All of them were Muslim. Singh realised that the legacy that they shared could not be easily compartmentalised into “Muslim” or “Sikh”.

The Sikh empire touted as deeply religious in the history narrated by the British colonists and their successors, was actually deeply secular. The distortion of history has meant that other, more dangerous falsehoods are being perpetrated, like the baseless rumour that Sikhs converted the Badshahi Masjid in Lahore into a stable for horses. On the contrary, some claim that Maharaja Ranjit Singh supported the mosque. Further, Khalsa schools and colleges used to impart excellent education to students of all faiths – a tradition that continued after partition in Pakistan under the Islamia schools and colleges. Indeed, during his travels Singh also came across many non turban-wearing followers of Guru Nanak in Pakistan, all of Pashtun origin and from the Khyber area.

These realisations – about the secular or syncretic nature of what he had assumed was a ‘Sikh’ heritage – pushed Singh beyond his original goal of taking a fistful of earth back from Muzaffarabad as a memento for his family. The realisation that this goals had changed stopped him in his tracks as he picked up some riverbank soil at a place known Domel, where the Jhelum River meets the Neelum River and is the site of a bloody massacre of Sikhs soon after Partition. (“We even ascribe religion to our natural resources,” adds Singh, referring to the Muslim name, Neelum, for the waters known as Kishan Ganga on the Indian-administered side).

On 21 October 1947, a war cry arose over the hills that the local non-Muslims were ill-prepared to counter: loot the Hindus, behead the Sikhs. Armed marauders herded the Sikhs, by some estimates around 200 of them, to the bridge across the river. Shots rang out. Among the bodies that toppled into the river were a couple – the grandparents of Singh’s wife.

Also killed were the parents of a five-year old called Jaswanti. A Muslim neighbour the next morning found the little girl scrambling along the riverbank looking for her father and mother. He took her into his own home, renamed her Noori, and brought her up as his daughter. Jaswanti/ Noor is Singh’s distant bua, aunt, related to his father. In Lost Heritage he relates the story of how she was found in 1998 and  re-connected with the Sikh side of her family. At 73 years, she continues to live in Pakistan as a Muslim.

Singh recounts how looking at the bridge over the river, he let the soil fall back to the earth from his hands at Domel. It was what he had come for. But he realised that the lesson he wanted to impart to his children was different. This souvenir would remind them forever of hatred and bloodshed.

“I went to get some soil but came back with a book,” he says. The soil would have been just for his daughters. The book would be a reference for coming generations of future travellers and history lovers. By the third week in Pakistan, Amardeep had realised that the “Sikh legacy” of this land went far beyond gurudwaras and ancestral homes, and was not limited to adherents of the Sikh faith. The legacy lived on in human interactions, experiences, memories, music, poetry, spirituality and other aspects of a shared history that belongs not just to Sikhs but also to Hindus, Muslims, Christians and others.

During his remaining two weeks, Singh used the lens, not of a pilgrim, but of a traveller chronicling socio-historical aspects. An important aspect of this is to place the contemporary reality of gurudwaras and havelis built and owned by Sikhs within a historical framework without blame or judgment. Many of these buildings are being used as police stations, libraries or residences. The mass crossborder exodus left these buildings abandoned, and those who came to this land were bound to fill the vacuum for their own survival.

Putting things in context also means being able to see the positive aspects, like the fact that the Pakistan government has since 1980s been looking after the holy places of non-Muslims. They may not always do a great job but the intent is there, as Singh stresses. The number of functional gurudwaras in the Punjab has increased from one to 23 over the past decades. Several Hindu temples have also been revived. People of all faiths must support and encourage these moves even though they may be, as Singh says “the tip of the iceberg” given the magnitude of the issue.

Singh is critical of those who haven’t been vocal in demanding that this heritage be preserved. Due to the lack of demand, the Lahore Museum’s Sikh Gallery has been closed, as Singh discovered when he tried to visit the gallery. He observes that Sikhs who visit Pakistan don’t seek to visit the museum while Pakistani Sikhs are, in general, too economically marginalised to pay much attention to such cultural pursuits. It is up to the diaspora – increasing numbers of who now visit Pakistan for religious reasons – to push for these demands beyond religion.

After Partition, practically the only Sikhs left in Pakistan were those living in the Pashtun areas bordering Afghanistan. Post 9/11 Taliban inroads into the region, accompanied by attacks on religious minorities forced large numbers to flee to the Punjab region. Many Sikhs took refuge in the Gurdwara Panja Sahib at Hassan Abdal, says Singh. He notes that Pakistan has for years been combating militancy while also reviving the historical religious sites belonging to religious minorities.

Overall, Amardeep Singh’s message is clearly not limited to Sikhs and Punjab or just Pakistan. It is about the need to go beyond surface identities and labels to an interconnected, secular past, and universal values. This is not just about the past but the finding a more harmonious way forward.

~ Beena Sarwar is a Pakistani journalist based in Cambridge, Massachusetts. She is also an editorial advisor at Himal Southasian.

~This is an updated version of the article first published on 03 August 2016.