Skip to content
Excerpt > At the Indian Coffee House

At the Indian Coffee House

On the Indian Coffee House and the 16th-century Sufi saint who introduced the beans to the Subcontinent. 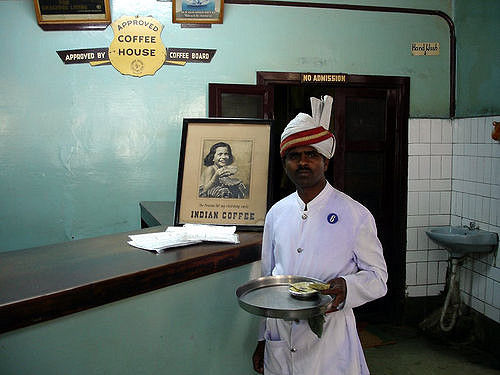 In 1970, I joined Delhi University as an undergraduate student. I decided to take up sociology, a subject that had been introduced recently, so it was taught at the Delhi School of Economics, which was a post-graduate institute. In the middle of the campus was a branch of India Coffee House. That is where I learnt to appreciate filter coffee and enjoyed idlis and dosa for lunch.

By this time, Papa was back in India and was appointed Secretary to Prime Minister Indira Gandhi. It was sometime then that Papa switched to having coffee on the doctor’s advice; I do not remember why the doctor had so advised. But Amma bought freshly ground South Indian coffee every week from the shop run by the India Coffee House.

The food and coffee in India Coffee House was good and very cheap. There was a reason behind this. Coffee had been grown in India by native Indians since the sixteenth century and the concept of coffee houses began to gain a little popularity in the eighteenth century in Chennai (Madras State) and Calcutta. However, the English rulers did not allow Indians to enter these coffee houses, and in reaction to this discrimination, the idea of an ‘India Coffee House’ was born.

The India Coffee House chain was started by the Coffee Cess Committee in 1936, when the first outlet was opened in Bombay. In the course of the 1940s, there were nearly fifty coffee houses all over British India. However, due to a change in policy in the mid-1950s, the Coffee Board decided to close down the coffee houses. This was what inspired the communist leader A.K. Gopalan to organize the workers of the coffee houses and demand that the coffee houses be handed over to them. The movement compelled the Board to hand over the outlets to the workers who then formed the Indian Coffee Workers’ Co-operatives and renamed the network as Indian Coffee House. A co-operative began in Bangalore on 19 August 1957, and one was established in Delhi on 27 December 1957.

Many years later, a Bangalore-based Naxalite friend told me about the Muslim saint who brought coffee to India. The saint’s name was Baba Budan. While returning from a pilgrimage to Mecca, he smuggled seven coffee beans (by tying them around his waist) from Yemen to Mysore in India. He planted them on the Chandragiri Hills), now named after the saint as Baba Budan Giri (giri means ‘hill’) in Karnataka’s Chikmagalur district.

Systematic cultivation soon followed Baba Budan’s first planting of the seeds in 1670, mostly by private native Indian owners, and the first plantation was established in 1840 around Baba Budan Giri and its surrounding hills.

The tomb of Baba Budan attracts thousands of pilgrims, both Hindus and Muslims. The land has belonged to the Waqf Board of Karnataka since 1964 but in 1978 a local Hindu leader claimed that it was Hindu land and filed a petition in support of his claim. After the Hindutva forces had successfully demolished the Babri Masjid in Ayodhya in 1992, they have become bolder. The first incident of hoisting saffron flags was reported in December 1999 when the Bajrang Dal threatened to storm the shrine in order to ‘liberate’ it of its Sufi heritage. Many writers and activists protested, but the Hindutva forces have stated that their objective is to turn the Budan Giri range of Chickmagalur into the ‘Ayodhya of the South’.

Since my husband Sebastian and I were now living in Goa, we thought it would be a good idea to drive down to see for ourselves the tomb of Baba Budan. We set off in November 2014 in our car. The drive from Goa to Chikmagalur is beautiful. We drove through the coffee plantations to the Thippanahalli Homestay, an old mansion built in 1934, offering accommodations. It is situated on the slope of the Baba Budan Giri at an elevation of 4,100 ft with a breathtaking backdrop of Mullaiahnagiri, the tallest peak in Karnataka.

The next day, we drove to Baba Budan’s shrine. We arrived in a good mood; the fresh air and the beauty had uplifted our spirits. But one look at the shrine at the bottom of some thirty-to-forty steps made my heart heavy. There were separate entrances for Hindus and Muslims.

I did not identify with either; in any case Sebastian, my husband, is a Christian. There was no entrance for him or for non-believers like me. The Hindutva forces had succeeded in desecrating the oldest Sufi shrine in South India with their hate-filled communal politics. The whole area was guarded by men in uniform carrying guns.

~ This is an excerpt from Nandita Haksar’s The Flavours of Nationalism: Recipes for Love, Hate and Friendship, (INR 350, 248 pp) published by Speaking Tiger in 2018.

Nandita Haksar is a human-rights lawyer and writer. She has represented workers, women, adivasis, Burmese activists, and the people of the Indian Northeast and Kashmir.