Skip to content
Southasiasphere > Foreign investment in Southasia’s telecoms, restrictions on protests in the Maldives and more

Foreign investment in Southasia’s telecoms, restrictions on protests in the Maldives and more

Southasiasphere: Issue #10 - Updates and analysis from around the region. 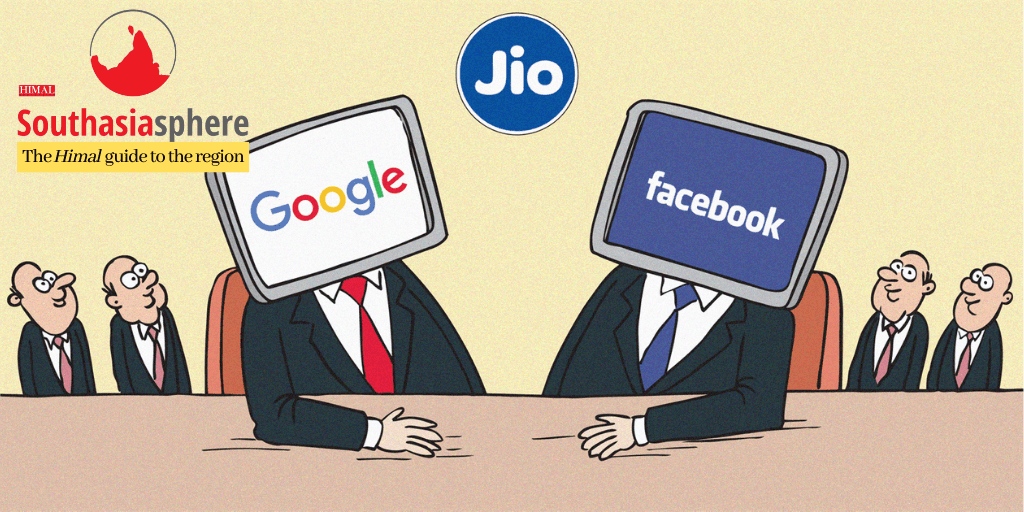 Restrictions to freedom of assembly in Maldives

Last week, Google became the latest company to back Jio Platforms, India’s largest telecom operator and a subsidiary of Reliance Industries, with an investment of USD 4.5 billion. Over the last four months, the Mukesh Ambani-led Jio Platforms has been raising money at a rate unprecedented in India and perhaps globally, selling a 33-percent stake in the firm to investors, including US tech giants Facebook (the largest minority stakeholder, with a 9.99-percent stake) and Google (which now has a 7.73-percent stake). Following its launch in 2016 and aggressive growth since then, Jio has rapidly become a market leader, in part helped by its influence with the ruling Bharatiya Janata Party.

Jio’s chairperson and largest shareholder, Ambani, has been able to expertly navigate India’s otherwise thorny regulatory environment, which remains a challenge for international firms aiming to compete in this space. His proximity with the government could be one of the reasons US tech companies want to invest in the Indian telecom; both Facebook and Google have already been inducted into Jio Platform’s board. India’s growing focus on data sovereignty over the last few years has worried international firms like Facebook, Google, Amazon and Microsoft. The government’s ban on 59 Chinese-owned apps this month is also likely to amplify foreign tech companies’ concerns about the future of their products amid such arbitrary executive actions.

Debates on issues like data sovereignty and the role of international tech companies in Southasia’s telecom market is only likely to grow, since many mobile operators in the region are foreign owned, and as the industry begins to adopt the 5G technology. In light of that, here’s a table we compiled to show the pattern of ownership of major telecom providers across Southasia.

Since the first protest in Bodufinolhu Island on 2 July, after migrant workers complained of not having received wages in over six months, over 80 workers have been detained as demonstrations spread to a few other islands. In at least one instance, the company that hired the protesting workers was owned by a sitting member of the Parliament. The Maldives government has labelled these incidents ‘riots’ and called the foreign workers a threat to national security. There are almost 150,000 migrant workers in the islands, which is nearly one-third of the total population.

The new rules on protests highlight a fundamental shift in President Ibrahim Mohamed Solih’s administration’s position. In August 2016, when the Abdulla Yameen regime amended the Freedom of Peaceful Assembly Act, banning protests without prior police permission, then Maldivian Democratic Party leader Solih had called the decision unconstitutional. The new rules on protests highlight a worrying trend of regression on democratic gains in the Maldives since the ouster of Abdulla Yameen and the victory of Maldives Democratic Party in 2018. In 2019, the Solih government shut down the Maldives Democracy Network, an organisation which worked on human rights and democratisation, for publishing a report documenting religious extremism in the country.

In India, Prime Minister Modi was invited to lay the foundation stone for a Ram temple in Ayodhya, days after Prime Minister K P Oli claimed that the Hindu deity’s birthplace was in Nepal.

Sri Lanka gears up for general elections slated for 5 August, amid concerns about COVID-19 and relaxed campaigning guidelines.

In Bangladesh, a hospital owner, who is closely associated with the Awami League, was arrested for issuing thousands of false negative COVID-19 test results.