A revival of Calcutta's Indian Chinese community may be imminent, after decades of neglect and immigration. 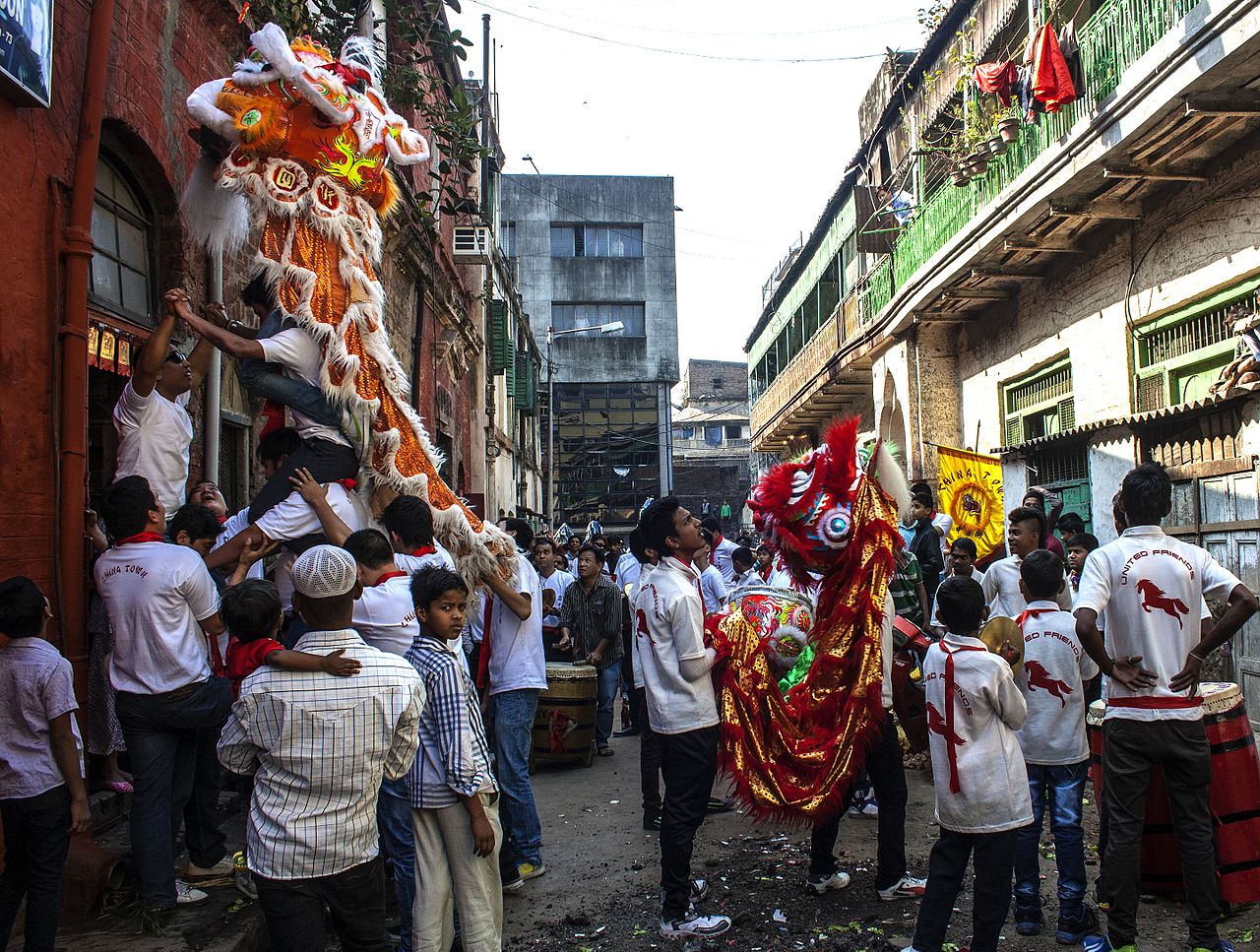 The traditional Chinese dragon dance breathes an indescribable liveliness into the Chinese New Year celebrations each year. The beating of drums echoes through the air, as the dancers sway ferociously to keep step with every beat. The small crowd applauds enthusiastically, mesmerised by the effortless twisting and undulating of the giant dragon. There is a frenetic energy here, and one cannot help but move along with the music. Such celebrations take place across the vast Chinese landscape, of course; this one, however, is taking place far removed, on the sidewalk of a busy street in Calcutta. Then again, the scene is hardly alien, for the Indian Chinese have been an integral part of the city’s make-up for more than a century. The demographics have been changing, however, as many Indian Chinese leave for shores beyond the Hooghly. Chinatown, meanwhile, has been slowly crumbling from neglect and indifference.

The Buddhist monk Fa-Hien’s journey to the Subcontinent – in present-day Nepal, India and Sri Lanka – during the fifth century AD is well known to many, due to the meticulous records that he kept during the experience. What is largely unrecorded is that Chinese traders, scholars and monks wandered the area for centuries thereafter. Their presence may not be etched in history, but their influence on the region certainly is. For instance, the Bengali word chinamati, literally translated as ‘mud from China’, is to this day used to describe porcelain. Centuries later, in 1778, Yong Atchew landed on the banks of Hooghly, to become the first Chinese settler in India. Atchew’s initial experiences in Calcutta are clearly laid out in the records of the East India Company. That year, according to the papers, a trader named ‘Achi’ petitioned Warren Hastings, then governor-general of Bengal, for land on which to establish a commercial enterprise. The request was granted, and he acquired a large plot some 33 km away from Calcutta, just south of the town of Budge Budge. There, Atchew set up a sugar mill, for which he brought in migrant workers from China. Many of these would eventually make Calcutta their home. The raw material for the mill was provided by a nearby sugarcane plantation that Atchew also owned. The mill became a focal point around which a quiet Chinese settlement would flourish, and the village was named Achipur, after Yong Atchew. The Chinese have long left Achipur, but their presence continues to echo through the beautiful ancient Chinese temple there, where the deities Khuda and Khudi are propitiated. The colours of the walls have faded with the passage of time, but the intricate wood carvings and Chinese inscriptions remain intact. A little distance away is a simple horseshoe-shaped grave, the resting place of Yong Atchew. Today, the village is a quiet one; but it comes to life every year during the Chinese New Year, as the Chinese community returns to Achipur to celebrate its founder’s life and legacy.

Integration and identity
The story of the Indian Chinese does not end in Achipur, however. Jennifer Liang, a third-generation Cantonese development worker from Bangalore now working in Bodoland, divides the Chinese migration to Calcutta into three phases. Larger numbers of Chinese first arrived during the 19th century, most of them traders and skilled workers in search of opportunities. These migrants shared a good relationship with the colonial government, which meant that they were able to make a living in India. The second wave, ancestors of a majority of the present-day Calcutta Chinese, arrived during the 1920s and 1930s. The imperial Manchu government was crumbling at the time to make way for the communist republic, and the situation became still more desperate after the Japanese invasion in 1931. This led to out-migration, and some of the refugees ended up in Calcutta.

Until 1910, most of the Chinese coming to Calcutta were men, and only a small number of them at that. But by the following decade, author Kwai-Yun Li points out, increasingly large numbers began to come, including women. At the time, there were two distinct Chinese areas in Calcutta. The ethnic Hakka settled into the eastern part, in Tangra, and went into shoemaking and leather-tanning; Bow Bazar, in the north, became home to Cantonese beauty salons and restaurants, Toi-Sanese furniture factories, and Fukkianese dentists and merchants.

Many of these immigrants did not seek to make India their permanent home. Rather, they were simply seeking refuge from the turmoil of their homeland. But after the end of World War II, in 1945, it became clear that the dream of returning to a peaceful China was to remain just that. Even while the conflict with Japan continued, civil war broke out between the feuding communists and Kuomindang, the Chinese Nationalist Party. As such, the final phase of Chinese migration to India occurred during this time, after which permanent Chinese settlements were finally established in Calcutta.

Standing out with their distinctive features, the Indian Chinese remained a marginalised community in Calcutta. Indeed, the community became largely ghettoised, alienated with little or no opportunity to interact with the Bengalis. Such was the case, at least, until the Sino-Indian War began in 1962. Suddenly, the Indian Chinese became spot-lit in a climate of suspicion and war hysteria. Though many knew only India as their home, they were demonised and their loyalty held suspect. Even today, those who lived through that horrifying time remain reluctant to speak of the old wounds. Yun Li, then a 12-year-old, remembers how her mother stitched money into the seams of their dresses and kept packets of rice and tea ready in case they were forced to leave their home. The entire community was fearful of deportation to the detention camps in Deoli, in Rajasthan. Set up by the British to house Japanese prisoners of war during World War II, thousands of Indian Chinese were interred there during the 1962 war.

The situation was not much different in the Northeast. There, many Cantonese carpenters and their families worked in tea gardens near the towns of Makum and Tezpur in Assam, and in restaurants in Shillong. In 1962, many of them, too, were transported to Deoli. When they were released some went back to China, but others returned to Assam and Shillong. Those who returned to Assam are almost incognito now, having married and completely assimilated amongst the locals. On the other hand, it is estimated that there are about 20 families, mainly Hakka, in Shillong who retain their Chinese identity.

Grabbing Tangra
After the war, many Chinese began to leave Calcutta itself. Though the treatment during the war was a catalyst for the exodus, it was not the sole reason. For instance, many supporters of Mao Tse-tung returned to the homeland during the 1950s, as he came to power. Moreover, there was a dwindling in economic opportunity for the Chinese after India’s Independence, which resulted in many looking to the West for greater opportunities. The ultimate impetus for much of this outward migration, however, was a law passed by New Delhi stipulating that only those Indian Chinese born in or after 1950 would be able to apply for citizenship. Even while this may have taken in most, the new legislation made the community feel like unwelcome outsiders, and contributed further to the exodus.

Today, about 90 percent of Calcutta’s Indian-Chinese community lives outside of India. The community in Calcutta today consists of less than 3000 people (from a high of roughly 20,000), with between 5000 and 7000 Indian Chinese scattered throughout the rest of the country. The younger, educated generation is particularly deciding to venture outside the country, and today such individuals are found mostly in Australia, the US, Canada, Taiwan and Hong Kong. All the while, though, Bollywood, cricket and jhal muri (spicy puffed rice) remain as much a part of their reality as that of any other non-resident Indian youth. As for Calcutta’s Chinatown, with the tanneries in Tangra forced to close down due to chemical pollution, the area is today characterised by rundown buildings and faded inscriptions, just waiting to be grabbed up by property developers.

The recent report of the sale of the Toong On Church, which is the site of the former Nanking Restaurant at Tiretta Bazar, could be a harbinger of what is to come. The property is owned by a trust, but Au Yau Wah, whose family started the restaurant around 1924, has been accused of conspiring to sell the place to developers. Years ago, the trust handed the original deed to the family, as they sought court protection to keep the restaurant from real-estate developers. The case ended and Nanking survived, but the deed papers were never returned to the rightful owners. As church trustees found themselves once again needing to petition the Municipal Corporation to save the property, the Nanking owners sided with the developers. The Nanking case continues to receive significant media coverage in Calcutta. As of last year, the municipal commissioner had asked the police to protect the site, and had revoked the permission that had been granted by the Municipal Corporation.

Motivated in part by such stories, today some Calcutta Chinese have begun to harbour the hope that the days of decline may soon be over. The strides made by the Indian economy have begun to slow the trickle of youth headed for Western shores. The starting of trade missions to China and the opening of the Chinese consulate in Calcutta – following Chinese Premier Wen Jiabao’s visit to the city in 2005 – 40 years after both were discontinued has created some optimism in the community. Beyond official gestures, this new hope is most visible in community efforts to revive their role in the city. In just one example, the Pei May Chinese School in Tangra, which had seen a steady decline in enrolment, was recently given new life by C T Lung, a third-generation Chinese and language teacher. Lung has taken on the mammoth task of interesting the youth in the language of their homeland, which many can neither read nor write. And with mainland Chinese investments in West Bengal increasing significantly in recent years, public interest in the language institution has risen – and the Chinese community benefits.

There has been at least one potent recent example of large-scale public acknowledgement of the Chinese history in India. Last year, Meiyang Chang, a Chinese dentist from Dhanbad in Jharkhand, became a finalist on the popular television show Indian Idol. As he charmed the audience with his flawless renditions of popular Hindi numbers, there was sense of pride among the Indian Chinese. What really stood out, however, was the acceptance of a person of Chinese ancestry singing Hindi songs, the viewers seemingly looking beyond the ‘foreignness’ to embrace him.

Indeed, in that image, the old demons finally seemed to have come to a rest. Perhaps Meiyang is an exception. Then again, he may well be a beacon of the possibilities for a community that has too long been relegated to the shadows and suspicions of the past. Overlooked once, perhaps they will now be remembered and accepted, as Calcutta wakes up to an important part of its own multilayered history.

What really stood out in Meiyang Chang’s appearance on Indian Idol was the acceptance of a person of Chinese ancestry singing Hindi songs, the viewers seemingly looking beyond the ‘foreignness’ to embrace him.