Getting the jab done

A crossborder discussion on COVID-19 vaccinations in Southasia. 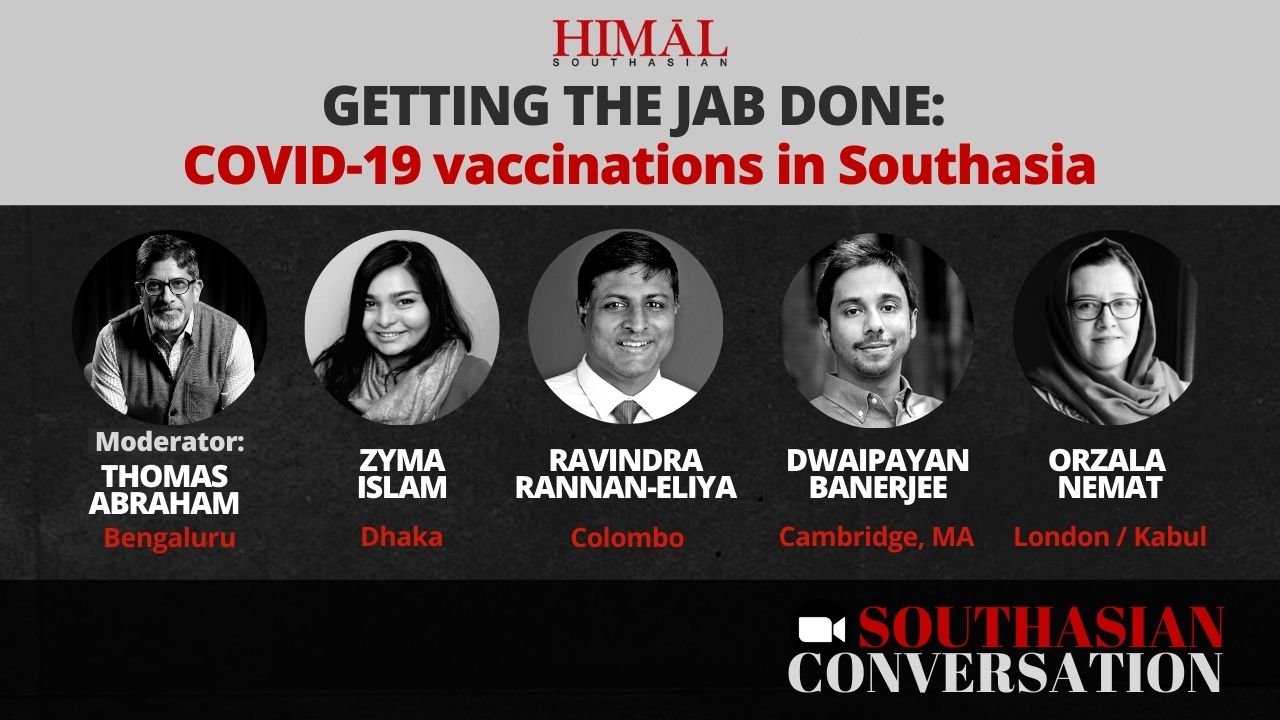 Like the pandemic itself, the problems faced by the inoculation drives over the past few months has revealed to us the confines of public health and the need to confront existing political, social and economic structures of our societies. In this second edition of Southasian Conversation, a series of online crossborder conversation, we hope to sift through the information (and jargon) to bring you interdisciplinary perspectives on COVID-19 vaccinations in Southasia. In this wide-ranging public conversation, recorded on 29 April, the panel explored the debates on vaccine production and distribution, the crisis of global and regional collaboration, and what the challenges of COVID-19 vaccination tells us about our fraught social contract.

Zyma Islam (Data journalist and reporter for The Daily Star. Based in Dhaka.)

Ravindra Rannan-Eliya (Physician, economist and researcher. Executive Director and Fellow of the Institute of Health (IHP). Based in Colombo.)

Dwaipayan Banerjee (Associate Professor of Science, Technology, and Society (STS) at Massachusetts Institute of Technology (MIT). Based in Cambridge, Massachusetts.)

The conversation was moderated by Thomas Abraham (Director of the Public Health Communications Programme at the Journalism and Media Studies Centre, University of Hong Kong. Based in Bengaluru.)

The full discussion is now available on Youtube and Soundcloud.

This is an unedited selection of excerpts from the event. Please listen to the corresponding audio before quoting from it.

Ravindra Rannan-Eliya: We’re suddenly asking the world to produce 80, 90% of the world’s population in 12 to 24 months. We’re talking about a tenfold increase in production. That cannot be done by any single country or any single economic bloc. It’s not just a question of, Bangladesh can set up a factory, they have the expertise – there are all these supply inputs. In India, the Serum Institute couldn’t produce because it couldn’t get plastic bags from America, right? So the supply chain cannot provide the inputs.

People talk about relaxing patents on mRNA vaccines. The key inputs into the mRNA vaccines like Pfizer are in incredibly short supply. So it’s not as if, oh, we have the technology, we can do this. The supply chain is really messed up.

Now, in order for us to solve this problem, we would have had to cooperate globally on vaccine production, and the tragedy for us is that this pandemic happened, you know, it started at the end of the Trump administration, but it happened at the beginning of the new Cold War.

Dwaipayan Banerjee: I couldn’t agree more that the issue of production is not a technical one as much as it is a political one. So why does India have the production capability it does in the first place? In the 1970s, we did not have any pharmaceutical production capacity at all. It was very much one or two legal changes by a government that wanted to change the colonial picture, that within 10 years, doubled, tripled, exponentially created a pharmaceutical industry that did not exist.

So the fact that there was production at a certain time was a political outcome. Now I think [Ravindra’s] right that it’s a Cold War geopolitics, but I think the issue is deeper than that. I think the significant and central issue is a capture of the U.S. government by the pharmaceutical lobby. So it isn’t even necessarily in the U.S. government’s interest to not play a larger role in the global stage, in different ways, it can work to its advantage. What is really holding them back is the fact that the major four or five pharmaceutical corporations have made sure that the patent rights trump the lives of people.

A very telling case in this is the AstraZeneca vaccine, where it was produced very much within a public institution, the Oxford Labs. But the Bill and Melinda Gates Foundation put so much pressure on the university that they ended up licensing it to only one manufacturer, AstraZeneca. There was a possibility then of having a different idea of what access to AstraZeneca would mean – access to the knowledge of production, a technology transfer if you will, not just a licence. That was shutdown by a big global public health foundation. You should ask why – whose interest is that in, to deny technical knowledge of production to most of the world?

Zyma Islam: The foreign ministers of six nations – there was China, and then five Southasian countries, which included Afghanistan, Pakistan, Sri Lanka, Nepal, and Bangladesh – they issued a statement saying that vaccine nationalism cannot be a thing. This is such a rare occurrence, where six foreign ministers of this region actually put out a statement like this. This is honestly a cry for help.

Thomas Abraham: In our region, it’s not so much vaccine hesitancy. It’s scarcity that is the issue. Hesitancy might be an issue later, we don’t know, once we have ample stocks of vaccine, if and when we do. But right now, the issue is scarcity.

Zyma Islam: I do think that hesitancy is something that we’re not necessarily concerned with right now, because we don’t have enough vaccines. But the segregation is real. A certain class of people are getting vaccines first. When the vaccines first came, there were a couple of categories that were prioritised.

So people, for example, belonging to a lower socioeconomic class, they were not prioritised. They were not a priority when it came to receiving vaccines, although they’re probably the ones with the lowest levels of immunity, because they are probably the ones with lower levels of nutrition. And we don’t even know how many of them have been affected by COVID-19 because if you, for example, go to slums or highly dense lower socioeconomic areas, you won’t find people talking about COVID-19 at all there. They don’t have access to masks, they don’t have access to sanitation services as much as some of us perhaps, but you won’t find them actually talking about COVID-19, because for them being infected is a death sentence.

Orzala Nemat: In terms of research and analysis, it probably is a time to go back and also draw some observations on how, for example, lockdown worked in our part of the world.

For example in Afghanistan, lockdowns were taken seriously, by the way. When I talked to my colleagues, last March, they said, yeah, there were a few weeks, only a few weeks, where you could see people were wearing gloves and masks and just completely covering themselves. You could see that suddenly, the overcrowded cities and the streets became like ghost places, but only for a few weeks until people figured out what was going on. And slowly, everyone was back. And particularly for daily laborers, for small and medium enterprises, this was something that they couldn’t afford.

The unfortunate reality in terms of linkages between conflict and COVID-19 is that, from the very beginning of it up until now, as we speak, for none of the parties in conflict, this became a serious matter. Yes, they have raised issues. For example, the Taliban for a period of time delayed a few weeks their meetings in Doha earlier last year, by saying, many of our members have been infected by COVID-19. But that was it. As soon as they recovered – I’m not sure what is the situation in Doha, but probably their top leaderships are already vaccinated with two dosages – it’s the masses back home, the foot soldiers, the ordinary ground forces, that have no access to vaccination. Whether they are the Taliban soldiers or the Afghan National Security forces or the ordinary civilians, the vaccination is not available. And even if it becomes available, I believe countries like ours would require further additional management systems to really properly distribute it to ensure that there is humanitarian access.

Violent attacks like suicide bombings or IEDs these days are quite common, magnetic bombings are common – even if these things cannot get people to sit at home and wait for the situation to get calm, how can a virus, really? So you know, lockdowns are not solutions. I think one problem, if we look back at the last year from the World Health Organisation, that I can see, is this issue of having one package of solutions addressing the whole issue in the same way and it doesn’t really work there. And you’ve seen that practice show that in this pandemic that we have to have concrete and find more creative solutions to contribute to prevention as opposed to just a declaration of general lockdowns.

But what we didn’t see is them stepping up and actually doing the remodeling, the retrofitting, needed to provide a pandemic response as fast as they could or as soon as they could last year, they did not. So the public hospitals unfortunately – I think there were five only to begin with – were the first ones that had to start taking in COVID-19 patients.

They soon caught up. The private sector definitely soon caught up and they did open their doors, but right now the costs are absolutely astronomical. The out-of-pocket payment can go up to, for an ICU bed in a private hospital, it can go up to a lakh every single day. So that would be around $1100 every single day. Private healthcare, even though it is right now available, that is not something that most of our population can afford.

And as for the public hospitals, we’ve been visiting hospitals every other day. What we’ve seen is that because of an oxygen and a bed crisis, you can perhaps get a space on the floor or you can get a metal trolley to land your back on, but if you need an oxygen cylinder, that’s something that you’re going to have to get yourself, if, for example, the hospital is not equipped with a central oxygen supply, which a lot of hospitals aren’t.

Ravindra Rannan-Eliya: I think it’s not surprising that there must be infinitely more social media and media discussion about COVID-19 than any other infectious disease that we’ve ever discussed in the past in our lifetimes. So it’s inevitable that people have views about this. Also, I think the fact that all these vaccines have been approved on an emergency-use basis, they have not, and for reasons of necessity, we’ve rushed these things through, and so there are some grounds for people to have concerns.

I think we have to be transparent when we make decisions. I think we need to be careful about what we say and stick to the facts and be honest about limitations. Right now, I’m not worried about it – vaccine hesitancy is a problem of affluence, it’s a problem for the United States. The real problem is scarcity in our region.

Orzala Nemat: When it comes to addressing the issue of vaccine hesitancy, we should not wait for the regional and global cooperation to work and have results and then start campaigning. There has to be, as much as possible, awareness-raising campaigns that can get people accurate information. There’s a lot of false information spreading around, social media is unfortunately contributing to that. That requires strong cooperation between health organisations, the state institutions dealing with health matters, and also civil society in our region.