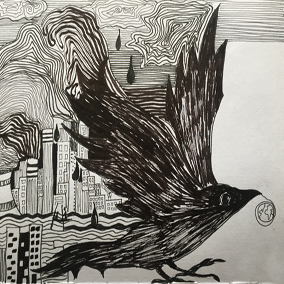 Ama Sonam built another floor to her house, blocking my sunlight completely. It’s not just her. Almost everyone has added another floor to their house even though the number of people living in the refugee camp is falling by the day. While I rot amidst the concrete shadows, the lucky ones get their ticket to the US or Canada, whether it is through a relative, tourist visa, or contractual marriage. One has to be excessively good at telling tales in order to get a green card. Immigration officers do not appreciate the stories of mundane struggles like joblessness and loss of hope. You have to add masala; less Tibetan, which is bland but honest to the actual taste of the food, and more Nepali, so spiced everything else is masked and undetectable.

Every time someone left, Tashi was next to me. Our goodbye waves becoming more limp with every new departure. It hadn’t been long since her husband had left and she had years to wait before she could follow him to the US. But out of nowhere, her visa got approved. Apparently, the earthquake helped speed up the process.

We were lamenting our fates in the tent under the hot sun when she got the news. We discussed Mentok’s marriage to Tashi. Tashi was the prettiest of us all. She did not have one pimple throughout high school. She was born pretty and will most likely die pretty as well, while Mentok had always been better known as nabzar (booger boy). I would have taunted him less if I knew he was going to be as resourceful as he is.

“Demoma (witch), go wash the clothes. They reek of mould.”

I wonder if my mother remembers my birth name. She had gone to Sharmaparinpoche for my name, who predicted that I would be a boy. I am not a boy. Mother believes he mistook me for one because of my stubborn nature, appropriate only for a boy. Mother decided the name was ok for a girl too. Most likely, she was too lazy to request another name for her girl.

I am used to it. It’s unique. If my friends can get used to people named 50 Cent and Pitbull, they can certainly adjust to mine.

What I can’t get used to is not having a washing machine at home. It would save me hours of household chores. The other families are getting them but as we only have my older brother sending us remittance, we are always one of the last when it comes to getting luxury goods. He has a good job, so we never suffer. Not as much as the families who have no one abroad. They have to make-do with measly Nepali salaries. On top of that, the blockade at the border is hiking up all the prices. I should consider myself lucky. At least I can look forward to the occasional clothes from Zara. Brother had always been fashion conscious. He used to listen to 2pac and Biggy Smalls like every other boy in camp at that time. He had a keen eye for trends and managed to look good; as good as the boys from richer families. The clothes he sends me, needless to say, are always nice. Maybe a little bit too much like the Kardashians, but cool.

This time around, I asked him for something less Kim and more Kourtney. Thinley is going to bring the clothes with her when she returns. I don’t know Thinley that much except for the fact she is my third-cousin from father’s side. Most of my father’s side of the family is from the camp in Majnukatilla in Delhi. I have only met three so far and that too during Kalachakra ceremonies. I don’t understand why it is necessary to attend so often. According to my hobbyist hermit neighbour, one time is more than enough. Then again, he is notable for his anti-Dalai Lama sentiments and I should be wary of any opinion he has about religion or even politics for that matter.

Thinle has a big butt. She doesn’t seem to know it. Rather than accentuating them, she wears “mom jeans” that make her ass look long and her crotch even longer. I think my clothes are trendier than hers. She looks more like the dirty injis (white hippies) in Boudha. She certainly has enough money and a fantastic figure. What a waste.

There is always a slight scent of cigarettes in Thinley’s room. Not that I mind. I used to sneak up to the rooftop in high school for a quick smoke. The boys would do more dangerous things but the school was always more lenient towards them. They guarded us girls as if we lugged around precious boons in our bosom. Thinley tries to be discreet. She blows it out the window. The window that is right next to Achung’s house and Achung’s mouth is as cheap as made-in-China products. She might as well smoke it outside in the camp during broad daylight.

“Why do you have a rainbow flag?”

“That’s from Pride. It’s a thing in America. Actually, people all over the world do it. It’s a parade.”

“For people like the phologmolog (neither male or female) – only they call it LGBTQA – like for different genders, different sexualities.”

“How strange. A love parade.”
“Yeah. For strange loves.”
“Hmmm. Have a cigarette to spare? I could use one.”

Thinley shifts to let me squeeze next to her near the window.

“Why a cigarette all of a sudden?”

“Brother has been trying to get a friend of his with US citizenship to marry me for a green card. He is asking for forty thousand dollars and we can barely afford twenty thousand. He thinks brother can give him the forty thousand because he drives taxi all seven days. Driving taxi brings in good money but he is also the only one supporting us.”

“Fucker. He should do it for free. Tibetans need to look out for each other. We pander to White people with all this Buddhism bullshit but we don’t show up for each other. Those White people are just hippies refusing to let go of the sixties. By the way, Tibetans are the only ones who think those dirty injis are still cool.”

Should I tell her I thought she looked like those dirty injis?

I turn to Thinley. “This feels wrong.”

“We know each other. I am not taking money from you. Our marriage is legitimate. It’s legal. And marrying your third cousin is also legal. Don’t be frightened.”

“That’s gross!”
“What? Gay marriage?”
“No. Marrying your third cousin.”

~ Kunsang Palmo was an intern at Himal Southasian. Her experience living as a gay, Tibetan woman informs both her writing and activism.