Trading at the edge

A photo essay on the slow but steady revival of traditional markets along the India-Bangladesh border. 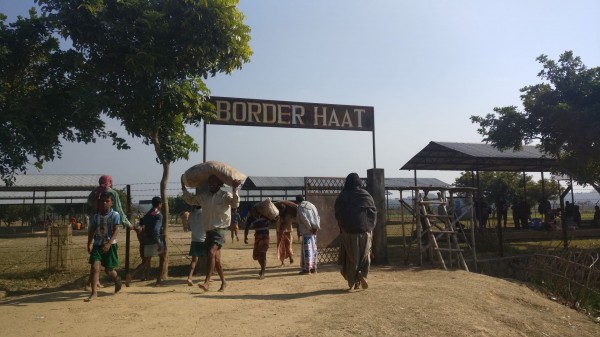 The Baliamari-Kalaichar border haat between Bangladesh and India. All photos by the writer.

Somewhere along the Jinjiram River – where Baliamari in Rangpur Division meets Kalaichar in Meghalaya – a haat (market) comes to life every Wednesday, where one can trade in Indian Rupees or Bangladeshi Takas, or just barter in goods. Located on the northern half of the India-Bangladesh border, this trading post has been a regular fare for people living in either side of the river, ever since the haat was opened in 2011.

The Baliamari-Kalaichar border haat is among a few common marketplaces that have been in operation since 2011, after Bangladesh and India agreed to open them to promote local trade and revive markets whose history stretches back to 1972, and in some cases, to the Mughal era. Closed down during Partition, some of these haats were reopened after the 1971 liberation of Bangladesh, but again abruptly closed, becoming a victim of the heavy securitisation of India’s border with Bangladesh.

But the process of reviving them has been slow. So far, only four border haats have become operational: two between Meghalaya’s border with Rangpur and Sylhet; and two between Tripura and Chittagong. In 2018, India and Bangladesh agreed to set up six more haats along Bangladesh’s border with the Northeast. However, the location of these potential markets is yet to be decided. According to estimates by the governments, the annual trade of these haats between India and Bangladesh comes to around USD 600,000.

During my visits to the Baliamari-Kalaichar haat in October 2017 and May 2018, I noticed the revival of the market, but also the visible presence of the state and securitisation of the trading post. Below are some photographs that show how the border haat has served as an interface between two states, and between two peoples.