Skip to content
Himal Briefs > The islands of ideologies

The islands of ideologies

In the Maldives, hardline Islamists operate with impunity. 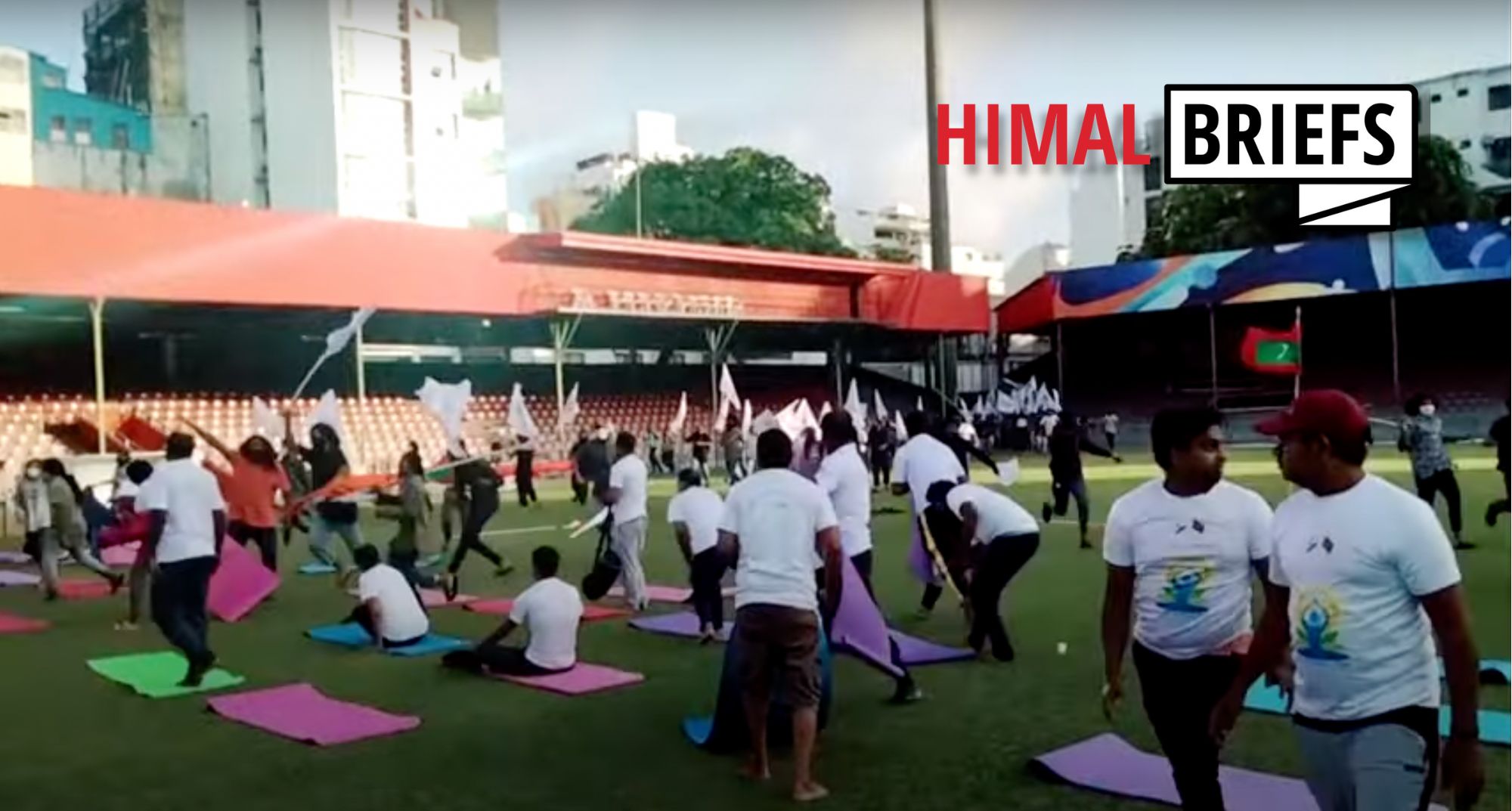 On the very day an 18-year-old shot 19 students and two adults at Robb Elementary School, in Uvalde, Texas, on the other side of the world, a 37-year-old man forcefully entered Jamaluddin School, one of the oldest primary schools in the Maldives’ capital Malé, according to local media reports. The attacker attempted to assault the school’s principal, screaming “Allah Akbar”.

According to Channel News Maldives, the reason for his attempted attack was based on ideology as much as politics: he felt the school curriculum was derogatory towards Islam.

In the Maldives, Salafi and other religiously conservative actors have successfully turned the school curriculum into a religious and political issue, with those critiquing it often labelled heretics. The Maldivian government has gone to the extent of reviewing the curriculum following criticism from civil society in 2015 that narratives in the Islamic Studies school textbooks promote violence, hatred, xenophobia, homophobia, antisemitism, and even intra-Muslim bigotry against sects outside of Sunni Islam. Muslims promoting democracy, rule of law and human rights, according to the textbooks as they were, are seen as traitors conspiring against Islamic societies.

The relative impunity around recent incidents of violence is part of a broader pattern.

Maldivian Democracy Network (MDN), one of the only organisations openly countering violent narratives in the country, was forcefully de-registered in November 2019, following a belated smear campaign over its 2015 report on extremism. The report exposed the severely problematic Islamic Studies curriculum and religious clerics, government, civil society, and security forces promoting fundamentalist ideologies. This was the continuation of a trend of smear campaigns run by hardline Islamist groups that then became legitimised by sources associated with the government in the Maldives. This can be seen in the case of the MDN, where the Islamic Ministry advised authorities in writing, and in no uncertain terms, that the authors of the MDN report should be executed for blasphemy and apostasy.

When the Maldives’ National Counter Terrorism Centre (NCTC) recently began conducting workshops to help identify extremist behaviour and ideology, local media, religious hardliners, and violent groups accused the Solih government of “brainwashing” and “policing” students in the guise of counterterrorism. “It is years of government-led courting of Islamists and downplaying of their violent sympathisers that have led us here”, said Shahindha Ismail, MDN’s founder and executive director. “Almost every incident is downplayed by the authorities.”

The incident at Jamaluddin school was not an isolated event. On 21 June 2022, a Yoga Day event organised by the Maldivian government and the Indian High Commission fell prey to mob violence with attackers storming the national stadium while many Maldivians, Indian diplomats and government officials sat on their mats, ready to perform yoga. The Islamist party, Adhaalath, which serves as part of the ruling coalition, has since declared that yoga is haram due to its ties with Hinduism.

And on 1 July 2022, a man clad in a robe bearing the Islamic State symbol forced himself into the minbar of the King Salman mosque during Friday prayers. All of these incidents constitute serious security breaches.

Maldivian identities that do not fit the increasingly mainstream conservative narratives, are considered as targets worthy of violent persecution.

The relative impunity around recent incidents of violence is part of a broader pattern. Former president Mohamed Nasheed survived an assassination attempt in May last year. One of the suspects (reportedly a former Maldives Police Service employee, although police denied this) is accused of surveillance on the former First Lady, Laila Ali’s family home. According to inside sources, some of the defence witnesses include fighters who were deported from Turkey in 2017 and captured on their way to Syria and Iraq. While ten people were arrested linked to the case, just one received a sentence of over 23 years’ imprisonment after taking a plea deal. Some implicated in the mob violence on Yoga Day are also linked to the attack on Nasheed. “At least five suspects from the Yoga Day attacks were also suspects in the 6 May 2021 bomb attack, including a person who gave refuge to one of the attackers the night before the attack”, said Nazim Sattar, Nasheed’s brother and a member of his legal team. Still, Nasheed’s lawyers have raised concerns about prolonged delays in the trial and incomplete investigations. Nazim had been vocal about the irregularities in the case when he was blackmailed and arrested under allegations of same-sex relations and kept in solitary confinement for two weeks. Nasheed’s UK-based legal representative, Kirsty Brimelow, tweeted about the targeted arrest: “My instructing solicitor in the Maldives complained to police of blackmail & then found that they were more interested in prosecuting him for the subject matter of the blackmail, namely alleged sexual activity with a man. He now has been arrested and remanded in custody for 7 days.”

Religious scholar and parliamentarian, Afrasheem Ali’s killing in 2012, which was followed by the abduction of journalist Ahmed Rilwan in 2014, and the brutal killing of blogger Yameen Rasheed in 2017, represent a pattern of individuals targeted for their political views (in 2019, a presidential commission announced that Rilwan was likely killed by an Al Qaeda affiliate, and is still investigating Rasheed’s killing). While many open-minded Maldivians have fled the country or been killed, radicalised gangs hide in plain sight with implicit support from state actors.

Social context and rise of extremism

Maldivian identities that do not fit the increasingly mainstream conservative narratives, are considered as targets worthy of violent persecution. The authorities have repeatedly failed to thoroughly investigate threats and violence at the hands of extremists. The national discourse on any given subject, even the health benefits of yoga, is increasingly dominated by more conservative religious leaders, as academic Azra Naseem writes for Dhivehi Sitee, a news analysis blog focused on the Maldives.

In the Maldives, Salafi and other religiously conservative actors have successfully turned the school curriculum into a religious and political issue.

Stories about violence against minority communities, including religious minorities and the LGBTQI+ community, have made the news more frequently in recent years. Eman, a Maldivian trans man, faced discrimination by the public and local media for his gender identity, forcing him to seek refuge in Australia in 2019. In December 2011, activists calling for religious freedom were violently attacked at a Human Rights Day protest. They had no choice but to flee a few years later after being repeatedly hunted down by gangs. Medulla Oblongata, a gay Maldivian drag performer, also fled the country after years of persecution and homophobic bullying. In June 2012, a few months after a military coup in February, Hilath Rasheed, a blogger speaking up for LGBTQI+ Maldivians, was stabbed in the neck in a near-fatal attack. Ismail Mohamed Didi, a 25-year-old who was persecuted for his lack of religious belief, took his own life in July 2010. These cases of persecution, tragically too many to list, coincide with the ‘democratisation’ of the political landscape in the Maldives.

One might be flummoxed over why it appears that certain sections of a Muslim majority country, with Islam as the state religion, feel their faith is under attack. The answer is complex. Some might say it’s the economy’s outsized dependence on tourism, the ever-widening socio-economic disparity in the backdrop of decades of authoritarian rule, and the country being bereft of justice for its historical atrocities, despite enacting legislation for transitional justice in 2021. Others will point out that the country was more resilient against extremism historically, due to its traditional form of Islam heavily influenced by Sufism and pre-Islamic Buddhist culture. Today, there is no national consensus or consistency – the interpretation of state religion is in the hands of an Islamic Ministry that is at war with itself (between relatively moderate and more hardline factions). The Ministry’s tentacles slither well beyond its mandate, regularly undermining the rule of law and Maldivians’ ability to reach a common understanding of justice; morphing and camouflaging itself as other state institutions.

These cases of persecution, tragically too many to list, coincide with the ‘democratisation’ of the political landscape in the Maldives.

This edition of Himal Briefs is not just about the man who entered my secondary school in Malé with the plan of carrying out violence or even the perpetrators of other incidents mentioned. Some have said they should not be lionised. “The media should not glorify it! We are playing right into the ego of people like them,” Mohamed Sharif, a Twitter user, says of the Jamaluddin school attacker. Rather, it is revealing of an island country experiencing a Kandu Mathi Elhun (in Dhivehi), a ubiquitous mirage, bound in superstitious belief, known to derail seafaring people. It is about the many people in the Maldives, left without prospects and with no ownership of their historical region and heritage.

The Maldives is a place where the wealthy can live in relative anonymity, including presidents fleeing accusations of corruption and crimes against humanity – with President Gotabaya Rajapaksa of Sri Lanka taking refuge in the Maldives after mass protests calling for him to step down. In contrast, over 200,000 Maldivian people are crammed into the congested capital city. The islands constitute the site of the world’s fantasies, which makes the pathos experienced by its original inhabitants a prickly subject.

The millions of tourists who visit the country have a limited understanding of the lack of social mobility and cohesion resulting in appalling human rights conditions for locals. Our national soul is lost at sea. Or perhaps, as my wise friend Yameen Rasheed once wrote, the Maldives is “ultimately a country with no soul”.

Mushfiq Mohamed is a Maldivian lawyer, writer, and human rights activist. He is a contributor to Himal Briefs for the Maldives, writing in his personal capacity.