The appointment of General Asim Munir as the COAS is of greater political than institutional significance. 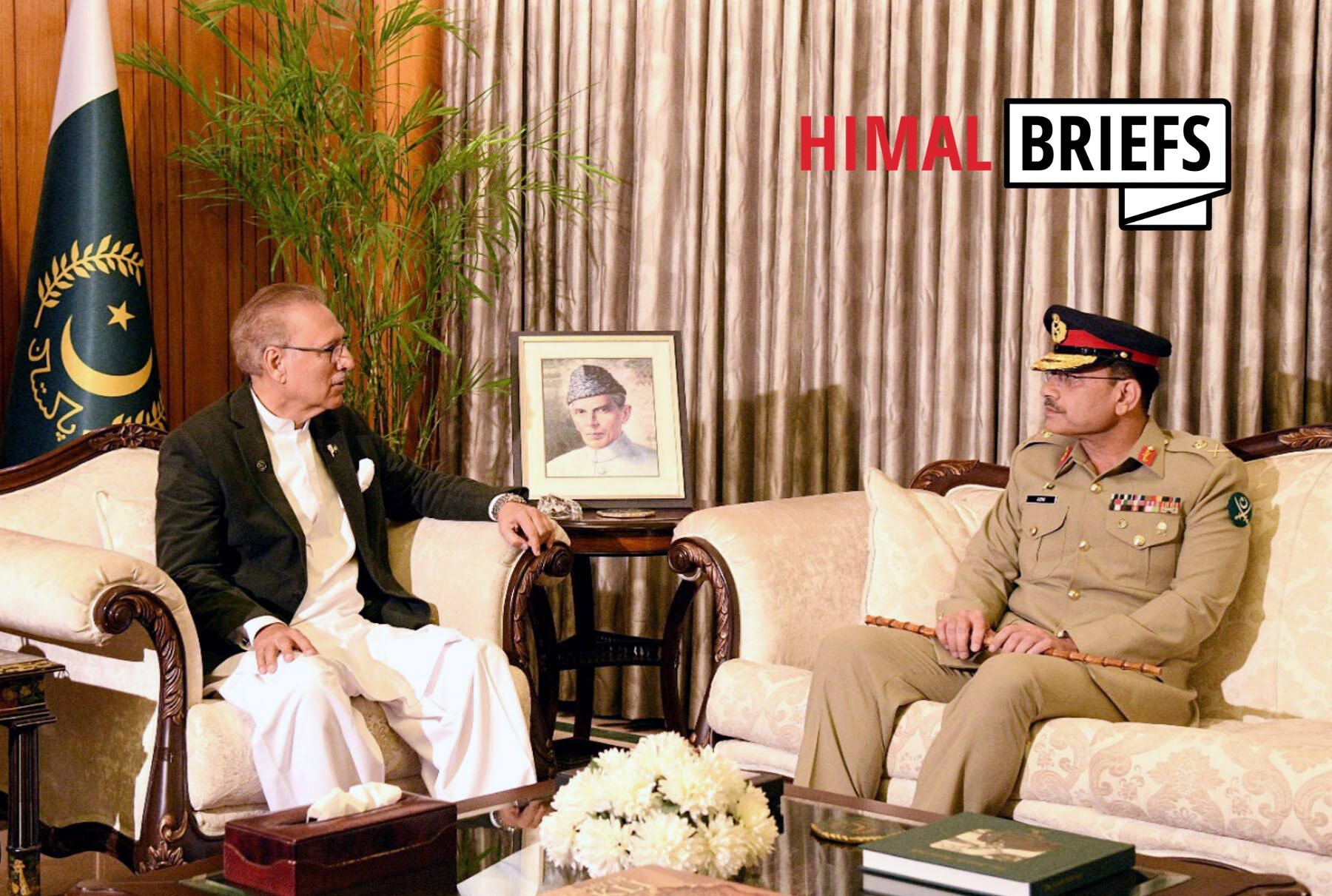 On 24 November, 2022, Pakistan’s prime minister, Shehbaz Sharif, nominated Lieutenant General Syed Asim Munir as the country’s 17th Chief of the Army Staff (COAS). Munir’s appointment followed what can best be described as an intense intra-elite tussle involving the outgoing military chief, General Qamar Javed Bajwa, over the appointment of his successor. Sharif’s incumbent coalition government defended its constitutional right to decide on the appointment. Unlike with other key appointments – such as that of the chief election commissioner, which involves consultation between the government and the opposition – Pakistan’s Constitution does not provide for the opposition to be involved in the appointment of the army chief. Pakistan’s mainstream media intensified this tussle with its obsessive reporting on the issue, explaining which individuals were favoured for the post by each of the major political parties and by the military itself. Equally, the frenzy gripped social media, where major stakeholders – including the political parties and the military establishment – waged a proxy war to try and secure their favoured army chief.

Why has the appointment of the COAS in Pakistan been such a contentious issue? To begin with, Pakistan has a long history of military rule, from Mohammad Ayub Khan to Pervez Musharraf. The political and strategic analyst Shuja Nawaz, in his well-researched Crossed Swords: Pakistan, Its Army and the Wars Within, shows how the military establishment has also indirectly manipulated civilian governments, even during the so-called decade of democracy (1988-1999). The military is represented by the COAS, who acts, according to a Pakistan People’s Party (PPP) parliamentarian who requested anonymity, as the “ultimate guardian of the system.” Therefore, the choice for the post of COAS holds immense political significance for any party, as good or bad ties with the military leader can decide the future of any civilian government.

The 18th Amendment to the Constitution was passed, in 2010, specifically to make subversion of the Constitution an offence amounting to high treason, while simultaneously stripping the higher courts of the ability to legitimise such interventions (effectively blocking future military intervention). But even this did not end the military’s involvement in politics. This remains true even though Pakistan has not seen martial law since 2008, when General Pervez Musharraf resigned as president. Several parliamentarians, such as the former senator Farhatullah Babar of the PPP, believe that the post-2010 governing system has gradually become a hybrid one that includes the military as a key player.

The choice for the post of COAS holds immense political significance for any party.

As discussed in a previous edition of Himal Briefs, a key reason for the fall of the government of Imran Khan earlier this year were his growing disagreements with the then COAS, Qamar Javed Bajwa, over military appointments. Khan, after exiting office, led a ‘long march’ from Lahore to Islamabad beginning in October, ostensibly to call for early elections but also to influence the decision on the new COAS (though Khan has denied such motives). This revealed both the cause and symptom of an institutional disease: Khan wanted to have his favourite, Lieutenant General Faiz Hameed, as the next COAS to ensure his victory in the upcoming 2023 elections, and he wanted Hameed to continue as the director general of the powerful Inter-Services Intelligence. The outgoing COAS, Bajwa – who was very powerful and influential – disagreed with Khan’s choice, even though he did not have any constitutional right to do so, and resisted Khan’s civilian authority as the prime minister. This disagreement led the military to withdraw its support for the Khan regime, and, subsequently, to Khan’s exit via a parliamentary vote of no confidence.

Before Khan, Nawaz Sharif was disqualified as prime minister in 2017. Although the Supreme Court of Pakistan removed him from office as part of a corruption case, many observers of Pakistani politics, including some parliamentarians of Sharif’s Pakistan Muslim League (PML-N), believe that the actual reason for his fall was, among other things, disagreement over control of China-Pakistan Economic Corridor (CPEC) projects in Pakistan. The military wanted a role and the Sharif regime resisted. Once the PML-N government was gone (defeated in the general elections of 2018, amid allegations of vote-rigging), the military-supported PTI government of Imran Khan established the CPEC Authority. This was headed by Asim Saleem Bajwa, a retired Lieutenant General of the Pakistan Army.

“What Pakistan has come to have is a de facto and de jure system.”

According to the political scientist Ayesha Siddiqa, a close watcher of the military, Pakistan transitioned from hybrid democracy to hybrid martial law in 2018. Qamar Javed Bajwa received a three-year extension as the COAS in 2019, while other military officers – mostly retired – found jobs in many key civilian institutions, including the Water and Power Development Authority, the National Highway Authority, and Pakistan International Airlines.

“It was this hybrid martial law system that led to Khan’s political demise in April 2022”, emphasised a senator belonging to Khan’s Pakistan Tehreek-i-Insaf (PTI), speaking on condition of anonymity. But Khan’s era (2018-2022) was only the culmination of this system. It began much earlier.

Immediately after Musharraf’s exit in 2008, civilian parties – the PPP and the PML-N in particular – came together to pass the 18th Amendment. That these parties were able to push through this amendment at all was an outcome of the Lawyers’ Movement. According to a former senator from the Awami National Party (ANP), who requested anonymity, this movement succeeded because of the “soft intervention” of the then COAS, Ashfaq Parvez Kayani. The military thus became involved in the constitutional process indirectly, to keep the process going.

The 18th Amendment was, thus, a tacit compromise between civil society and the military establishment. In July 2010, months after the amendment was passed, Kayani’s tenure as the COAS was extended for three years. This extension became a precursor to the ultimate revival of the National Security Council of Pakistan in 2013 for “better coordination” of the civil-military apparatuses of the state.

According to the political scientist Ayesha Siddiqa, a close watcher of the military, Pakistan transitioned from hybrid democracy to hybrid martial law in 2018.

The permanent inclusion in the council of military chiefs from the Pakistan Army, Navy and Air Force was considered essential even though the 1973 Constitution contained no provision for the military’s role in political matters. This committee’s scope was very wide. As the political scientist Aqil Shah quotes in his book The Army and Democracy, an official press release said that the committee “will formulate a national security policy that will become the guiding framework for its subsidiary policies — defence policy, foreign policy, internal security policy, and other policies affecting national security”.

This was the legal consolidation of the hybrid system that Pakistan came under post 2010. According to the ANP senator I spoke to, it flourished in subsequent years as the army, “being the most powerful of the three military forces, came to influence political developments more than any other political actor or institution in Pakistan. It had the steering wheel under its control”.

The hybrid system stands to continue.

“What Pakistan has come to have is a de facto and de jure system,” argued the PTI leader. “Within the de facto system, the COAS holds all actual power. Within the de jure system, the PM does. This is why the question of the COAS’s appointment is as sensitive and politically significant as the general elections.” Even Imran Khan, after his ouster, has said many times that his hands were tied.

That is why the PTI tried to influence the COAS appointment – Khan wanted an army chief who would not tie his hands in the future. That is also why the PML-N-led ruling coalition asserted its prerogative. But within the de facto system, even the ruling coalition did not have actual discretion. What it did was coordinate with the departing army leadership to appoint a COAS who could best serve their mutual interests. Thus, the hybrid system stands to continue.