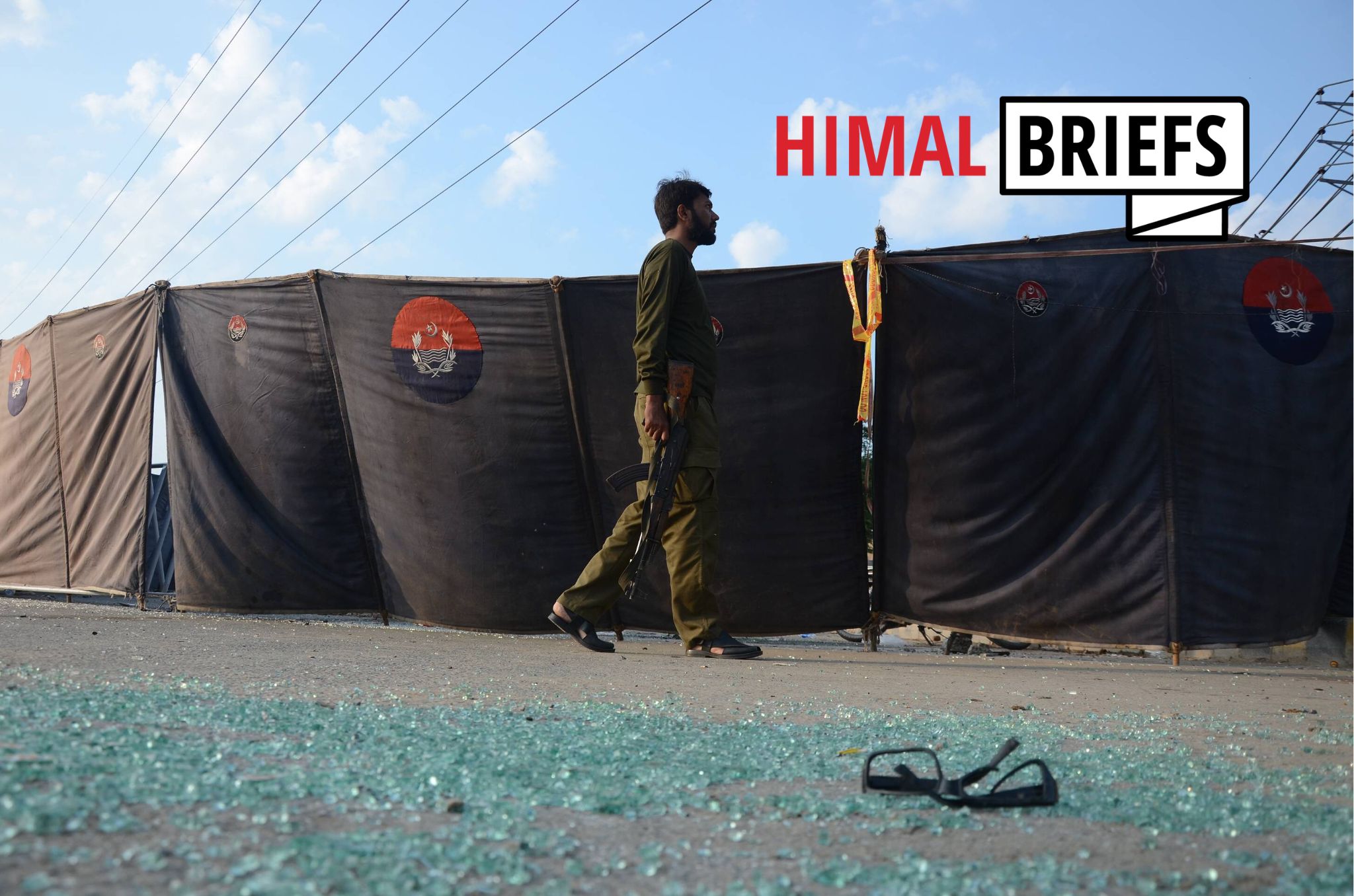 After fighting for over a decade, Pakistan and the banned militant organisation Tehreek-i-Taliban Pakistan (TTP) reached an agreement on 2 June to hold an “indefinite” ceasefire. The agreement has been brokered by the Afghan Taliban, with Taliban interim Deputy Information Minister Zabihullah Mujahid saying that there are “bright chances” for these talks to ultimately succeed in ways that would end the war and integrate the TTP with Pakistan. Many similar agreements were penned with different militant factions in the past – including in 2004, 2006 and 2008, with peace talks being held in 2011, 2013 and 2014 – but none led to an end to the war.

The TTP calls for the reversal of the Federally Administered Tribal Areas (FATA) merger with the Khyber Pakhtunkhwa (KPK) province. They are also adamant in their demands to retain arms and amnesty for their fighters. The talks have failed so far despite multiple efforts to come to a resolution, including most recently when Pakistan sent a delegation of leading Islamic clerics to try to convince the TTP leadership to change its stance. Perhaps the first question to ask about the ongoing talks, given the current state of impasse, is ‘why now?’

For the Pakistan state, internal peace is important – not only because another period of war will be deadly. Pakistan’s economic situation leaves minimal room for a sustained military operation. Pakistan is unlikely to receive any international support (via the Coalition Support Fund) to fight the TTP, with the US government gradually withdrawing military aid to Pakistan since at least 2010, and the recent withdrawal of US troops in Afghanistan.

But, apart from Pakistan’s internal compulsions, Islamabad’s talks with the TTP are also being shaped by the wider regional context. The ‘victory’ of the Afghan Taliban against the US, NATO and Afghan security forces in August 2021 – which led to less restricted movement of crossborder jihadi networks in Afghanistan – became a signpost for the TTP to push for a similar objective in Pakistan. In 2021 alone, the TTP and its allies carried out at least 128 attacks in Pakistan (the TTP claims 282 attacks), according to the Islamabad-based think tank, the Pakistan Institute for Peace Studies, and have killed hundreds of people, including dozens of security personnel. The Inter-Services Public Relations, Pakistan military’s media wing, states that a total of 97 soldiers were killed in the first three months of 2022 alone.

Perhaps the first question to ask about the ongoing TTP talks, given the current state of impasse, is ‘why now?’

This intensity follows the success of Noor Wali Mehsud, the current leader of the TTP, in reuniting various TTP factions. As a July 2022 report of the United Nations Security Council (UNSC) said, the group has 3000 to 4000 fighters in Afghanistan, making it one of the largest terrorist outfits in the region.

Pakistan’s military claimed these attacks were staged from within Afghanistan, where the TTP is presently based. In April, the military retaliated by carrying out air strikes in the eastern provinces of Afghanistan. As diplomatic sources confirmed, these strikes were meant to push the TTP – and the Afghan Taliban, who support the group and act as mediators – to come to the negotiating table for a durable peace deal. The Afghan Taliban continue to maintain close ties with the TTP. Following their ‘victory’ in August 2021, the Taliban commanders released hundreds of TTP fighters imprisoned in Afghanistan. This allowed Noor Wali and the TTP to regroup and, consequently, intensify the war in Pakistan. More recently on 8 August, 2022, a TTP member and former leader of breakaway faction Jamaat-ul-Ahrar Abdul Wani, also known as Omar Khalid Khorasani, was killed alongside his driver and two close aides in a late-night roadside bombing. The killings after a deadlock in talks is likely to make Mehsud even more intractable on TTP demands.

A stepping stone to separation

Islamabad’s talks with the banned TTP present a striking contrast to Pakistan’s reluctance to follow through on peace talks with Baloch militant groups, who have been fighting for Baloch rights and control of Balochistan’s resources for decades. There are two main reasons for this. First, the Pakistan state, dominated as it is by the military establishment, remains wary of the demands for absolute regional autonomy, believing it to be a stepping stone to separation (this view has been expressed by various retired army generals I have interviewed in the recent past). The military believes it can tackle the Baloch groups. Secondly, the Pakistan Army believes that not engaging with the TTP could push the group to intensify its war and add to the ‘Baloch problem’ – and how it is destabilising the China-Pakistan Economic Corridor – that Pakistan is already facing.

In 2021 alone, the TTP and its allies carried out at least 128 attacks in Pakistan.

As the Pakistan Army – which is leading these talks and is directly involved – told the Parliamentary Committee on National Security (PCNS) in June, the TTP could join the Afghanistan-based Islamic State in Khorasan (IS-K), which is why a peace deal with the TTP is all the more important. Security experts believe talks with the TTP have become a compulsion, which is why the Pakistan Army conveniently told the PCNS that mainstreaming the TTP would not create a jihadi state in the region.

But what does this compulsion entail and how would talks with the TTP ensure peace, if at all?

For years, the TTP was primarily based in FATA. The Pakistan Army’s various military operations in the past few years forced it to relocate to Afghanistan. The TTP’s exit allowed Pakistan to formally integrate FATA with mainland Pakistan via the 25th constitutional amendment in 2018.

Peace talks between the Pakistan state and the TTP, therefore, hardly mean ‘peace’ for the people in the region.

The TTP’s demand to de-merge FATA and reduce Pakistani forces in the region indicates that it wants a territory beyond Islamabad’s legal and constitutional jurisdiction, likely to implement its own version of Islamic Sharia law. Giving FATA to the TTP is tantamount to creating a state within a state. As Ayesha Siddiqa, well-known expert on security in Pakistan, based in London, told The Print, “Experience has shown the TTP is highly ideological, and will use territories from which the Army withdraws as a launchpad for future operations.”

Therefore, while an “indefinite” ceasefire and successful talks with the TTP may end attacks on people and security personnel in Pakistan, areas under the TTP’s control are unlikely to become peaceful insofar as the people of FATA have been resisting the Taliban’s control and the politics of implementing Sharia law in the region for years.

Indeed, the Pashtun Tahafuz Movement (PTM) emerged from within FATA and has been, ever since its formation, demanding accountability for rights violations including by the military, and a complete elimination of all terrorist groups. The Pakistan military now negotiating with the same group means that past military operations were unsuccessful in dismantling the terror network.

As a PTM activist, who requested anonymity in view of the widespread targeting of PTM activists by the TTP and Pakistan’s security establishment, told me, “allowing the TTP to consolidate itself legally in FATA is nothing short of leaving the people of FATA at the total mercy of the Taliban. We do not want this. What we demand is for the Pakistan state to fundamentally change the policy of appeasing the Taliban for one reason or another.”

Islamabad’s talks with the banned TTP present a striking contrast to Pakistan’s reluctance to follow through on peace talks with Baloch militant groups.

While any deal with the TTP will be approved by parliament, neither the people of FATA nor their parliamentary representatives have any decision-making roles around the talks. People familiar with the ongoing process have said that any deal negotiated by the army will be largely accepted by the current coalition government, although some marginal voices may oppose it. But the situation is alarming for the people of FATA, who fear becoming subjects of the Taliban: “The Taliban will impose their rule and suppress, or kill, all those who dissent”, the PTM activist said.

In June, four members of the rights group ‘Youth of Waziristan’, which called for peace in the region, were killed by unidentified armed men. A PTM leader and a member of parliament representing FATA, Ali Wazir, has been in prison for over a year and a half. Peace talks between the Pakistan state and the TTP, therefore, hardly mean ‘peace’ for the people in the region. While successful talks may end militancy for the time being, it will eventually brutalise the region again after years of warfare and the displacement of millions of inhabitants.