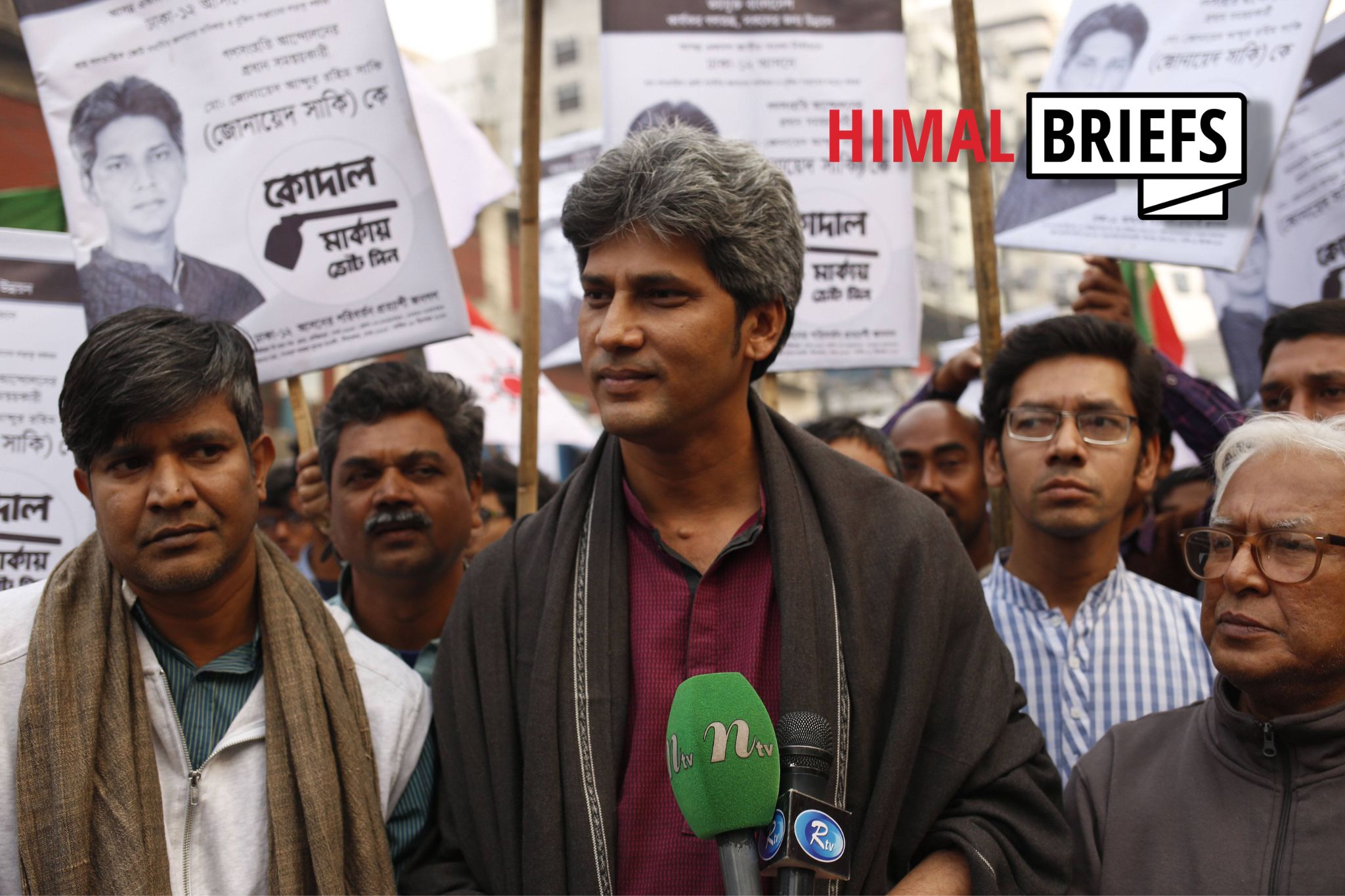 Junaid Saki, one of the leading coordinators of the new Ganatantra Mancha alliance in Bangladesh. Photo: IMAGO / ZUMA Wire

Will Ganatantra Mancha rock the boat?

Will a new political alliance be the antidote to the Bangladeshi political impasse.

In Bangladesh, the preparations for the next elections have already started. Although the election is more than a year away, slated to be held in December 2023, the parties seem to already be preparing for it in their own ways. Recent clashes between the student wings of the two major parties, the Awami League (AL) and Bangladesh Nationalist Party (BNP), on the Dhaka University campus show that the two parties are gearing up for the confrontation ahead of time.

Among these parties, the Biplobi Workers Party and Ganosanghati Andolon quit the Left Democratic Alliance (LDA), an alliance of the country’s eight left-leaning political parties, to join the new Ganatantra Mancha. On the other hand, Jatiya Samajtantrik Dal (JSD-Rab) and Nagorik Oikya were a part of the Jatiya Oikya Front, a political alliance of smaller parties that contested the 2018 elections together with the BNP. The other three parties of the proposed new alliance are relatively new and their ideology can largely be termed as centrist.

This new alliance is interesting for many reasons, the first of which is its ideological diversity. It will contain elements of both the rightwing and the leftwing of Bangladeshi politics.

This new alliance is interesting for many reasons, the first of which is its ideological diversity. It will contain elements of both the rightwing and the leftwing of Bangladeshi politics. It will include, for instance, the conservative elements of the newly formed Gono Odhikar Parishad, formed out of the 2018 quota-reform movement that sought the reduction of government jobs reserved for various groups. At the same time, the alliance will contain left parties such as the LDA and the JSD-Rab. Meanwhile, parties like Bhasani Onusari Parishad, Rashtra Sangskar Andolon and Nagorik Oikya lend their centrist and centre-left credentials to the platform, giving it the appearance of balance and diversity. The proposed coalition has recently finalised a political agenda as well. Ousting what they term the ruling “fascist” government seems to be their primary goal. They are also seeking to amend the structures of government that they argue lead to centralisation power and enable corruption and abuse of authority. They also advocate strengthening the country’s democratic institutions, and call for the formation of an election-time government that is acceptable to all parties.

Against the ruling regime

This alliance has primarily come together as a force against the ruling AL regime that has been in power since 2009, with two tainted elections in 2014 and 2018, one of which was boycotted by the major political opposition party and saw the election of 153 members of Parliament winning without contest, while the other was marred by violence, irregularities, and vote-rigging. With many of its leaders and cadres in jail and with pending cases against many others, BNP is now looking for allies and has already held dialogues with Ganosanghati Andolon, agreeing to a coordinated movement against the ruling regime.

They also advocate strengthening the country’s democratic institutions, and call for the formation of an election-time government that is acceptable to all parties.

National politics remains at an impasse. Awami League leader Sheikh Hasina’s proclamation that she wants continued and absolute power to develop the country further was met with a mixed reaction of criticism and congratulation from the divided Bangladeshi polity. On its part, the BNP has failed in spite of various attempts, to effectively connect with the masses to mobilise a movement for free and fair polls and free their party leader, Khaleda Zia, who has been imprisoned on corruption charges. In this situation, the proposed alliance may play the role of a power broker if they can connect their message with the wider public and effectively push for a neutral interim government to aid the Election Commission to arrange a free and fair election.

It is possible that the ruling regime already sees this new coalition as a viable threat, as the leaders of the coalition came under attack when visiting victims of a container-depot fire in Chittagong Medical College Hospital. Unidentified men attacked leaders of the platform with rods and sticks chanting the “Joy Bangla” slogan during their visit and they had to receive medical treatment. It is possible that this was an impromptu attack carried out by followers of the ruling party, or it could be something more coordinated (as the leaders of the Ganatantra Mancha suggest, but the suggestion could not be substantiated). In any case, the attack has definitely brought the alliance media attention and voters have started considering if the new alliance may become a threat to the people in power. Since the attack, the platform has carried out protests and processions, blaming it on the ruling party and calling for a political alternative to the ruling regime.

Awami League leader Sheikh Hasina’s proclamation that she wants continued and absolute power to develop the country further was met with a mixed reaction of criticism and congratulation from the divided Bangladeshi polity.

Some members of the alliance, including Rastra Sangskar Andolon and Ganosanghati Andolon, also have larger goals for reforms. They are calling for the introduction of a proportional representation (PR) system of elections, and constitutional reform in a bid to decentralise power from the prime minister and empower parliament. The difficult task ahead for these parties is to connect these political demands with the general public, who are more concerned with unemployment and inflation issues which are not yet in the front and centre of the platform’s messaging.

New parties definitely face the problem of name recognition. Although the names of the leaders of the new alliance may be familiar to some, more so with the politically interested, most people do not yet know about the existence of the new coalition. The vocabulary of the coalition, being centred around reforms of democratic institutions, electoral government and the constitution, may be too abstruse for voters to connect with. Their messaging sounds more like civil-society reformism than a politically charged call to rouse people against a ruling regime that is turning increasingly authoritarian. It is yet to be seen how the parties will construct their political narrative in coming days to connect with the people and build a viable alternative to the Awami League.

Will the alliance make a difference?

Would this alliance be able to make much of a dent in the current sorry state of Bangladeshi politics? Its parties are not large enough to generate massive protests and their messaging is not yet powerful enough to mobilise many protesters, something that all the opposition parties, including the BNP, see as a necessary step towards achieving a neutral national election campaign.

Another fear is that this alliance would be torn apart by larger parties closer to the election, something that happened with the promising third-party alliance Jukto Front in 2018, which later dissolved as parties from the alliance rushed to join the Awami League – or BNP-led coalitions. As this new ideologically diverse and potent political alliance charts its way through the uncertain waters of Bangladeshi politics, it is possible that larger parties will try to absorb them, with the BNP vying for a larger opposition coalition, and Awami League looking to foil the chances of a new rival.

In any case, what is in store for this coalition is yet to be seen. Their messaging, public outreach and political alliance-building will all be tested in the coming days. Otherwise, they may become another forgotten name in the arena of Bangladeshi politics.

Anupam Debashis Roy is an independent writer and researcher. He can be reached at writeranupam1101@gmail.com. Anupam covers Bangladesh as a regular contributor to Himal Briefs.