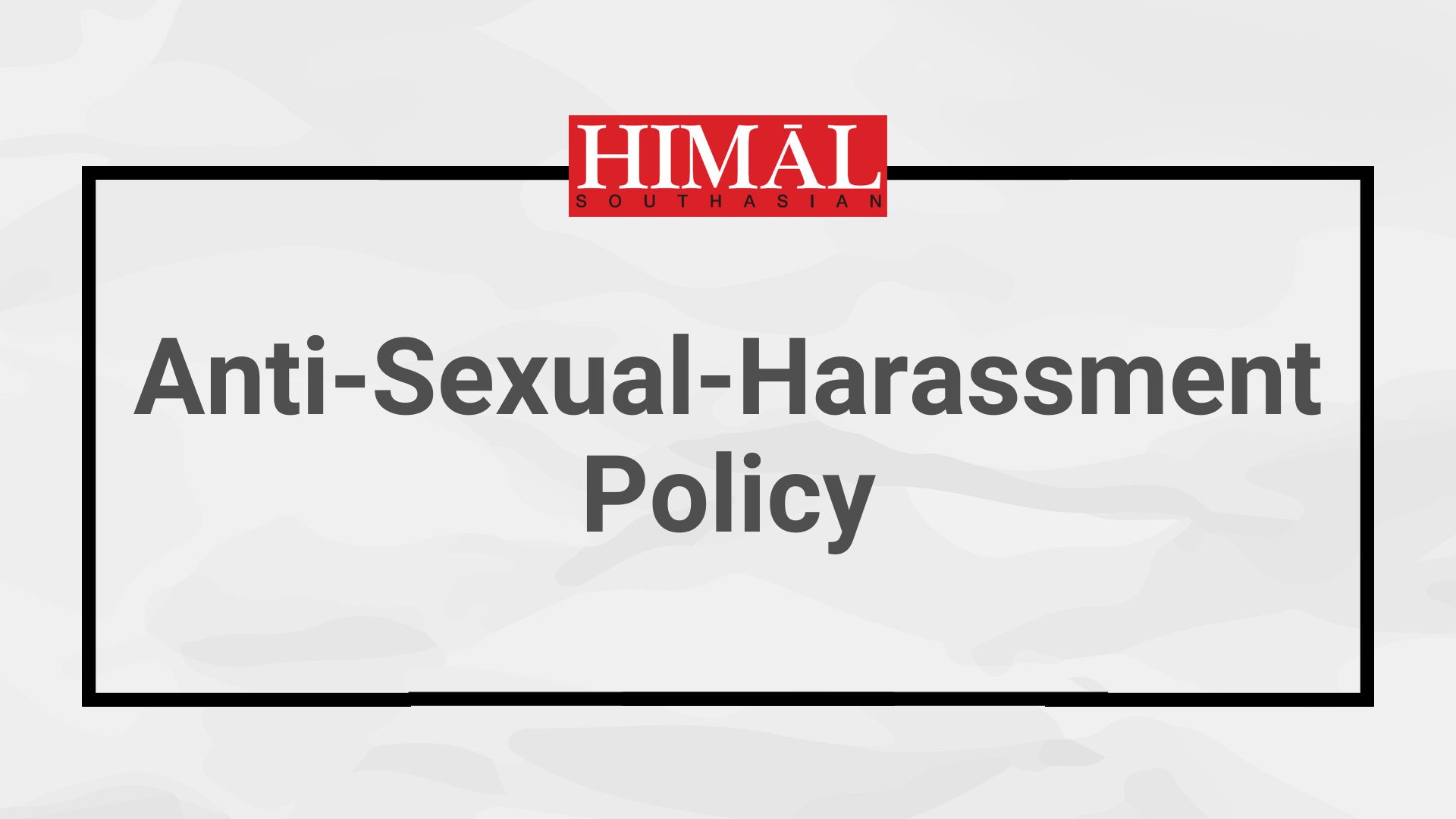 In late 2019, Himal Southasian initiated a process for developing an anti-sexual-harassment policy for the organisation, initially drafted based on the Vishakha Guidelines (instituted by the Supreme Court of India) and the International Labour Organization’s sample policy. A similar policy was in place at Himal when it was based in Kathmandu, before its temporary suspension and relocation to Colombo in 2018. After several rounds of consultation and its eventual adoption in 2021, we’re pleased to publicly release Himal’s ‘Anti-Sexual-Harassment Policy’. Our objective in publishing it online is to provide a reference point for other workplaces to develop their own policies to address the pervasive issue of workplace sexual harassment. We do not intend for this document to be absolutely prescriptive – it is specific to our context, and emerged out of consultations with all members of our organisation. Policy documents alone cannot be a solution to sexual harassment, which is perpetuated through patriarchal systems and entrenched power and privilege. But we hope this document encourages further discussions and, hopefully, more concrete action on ways to make workplaces safer for everyone.

Himal is committed to ensuring a safe and secure environment for all its employees, free from discrimination and harassment. As such, Himal undertakes to prevent or deter the commission of such acts and will adopt a zero-tolerance policy for any form of sexual harassment, inappropriate behaviour, misconduct, or abuse in the workplace. All complaints of sexual harassment will be taken seriously and treated with respect. A safe space and environment will be ensured for the complainant including confidentiality where appropriate. Action will be taken as required, including but not limited to disciplinary action.

Himal shall deem as sexual harassment any unwelcome act(s) of a sexual nature, conducted either directly or by implication. These include but are not limited to one or more of the following:-

• Physical contact and advances: including patting, pinching, stroking, kissing, hugging, fondling, or any other inappropriate touching

• A demand or request for sexual favours, including through the use of job-related threats or rewards

• Sexually coloured remarks or comments on an individual’s physical appearance, jokes or insults

• Repeated and unwanted invitations for dates or physical intimacy

• Tech-based harassment via information and communication technologies such as phones, the internet, social media platforms and email.

• Any other unwelcome physical, verbal or non-verbal conduct of sexual nature, including leering, sexually-suggestive gestures, whistling and singing.

Himal also recognises that anyone can be a victim of sexual harassment, regardless of their sex/gender and of the sex/gender of the harasser and recognises that sexual harassment may occur between people of the same sex. Further, it must be emphasised that any act(s) of harassment shall be culpable whether it takes place online or offline, within the office premises or outside, including at social events, business trips, training sessions or conferences, during work hours or after work hours. Moreover behaviour which creates discomfort should be acknowledged and redressed even if it is not committed against a specific individual.

Any aggrieved person may make an oral or written complaint to the relevant point persons, and shall have the option of making the complaint with guarantee of confidentiality. A committee (see Committee Composition) shall be appointed to inquire into matters of sexual harassment.

When a complaint is brought to the attention of a committee member, they will:

• Immediately record the details of the incident(s);

• Discuss and agree on next steps, being mindful of respecting the complainant’s wishes

• Encourage complainants to engage in a formal process if the gravity of the complaint requires it;

• Ensure that the victim knows that they can also choose to lodge a complaint outside of the organisation through the relevant country/legal framework.

If the complainant wishes to deal with the matter informally, the committee member will:

• Talk to the complainant and decide in agreement with them whether to resolve the issue before taking it up with the other internal committee member, or whether the second member of the committee should also be involved

• Facilitate a discussion between both parties to achieve an informal resolution which is acceptable to the complainant, if required

• Take other necessary action, if required

• Address the matter within a time frame of 2 weeks unless decided otherwise.

If the complainant wishes to deal with the matter formally, the committee member will:

• Inform all other members of the committee (both internal and external)

• Emphasize to the complainant that any procedure undertaken by the organization does not preclude individuals from dealing with the matter through other relevant legal means.

−    1 Representative from Himal staff who is not from management

b) 1 external member, who is not part of Himal Southasian either as current employees, board members or consultants. This member will also chair the committee.

Nominations to the committee shall be made by the Himal staff. This will involve, first, the staff members making their nominations for both the internal member and the external members (including the two standby members). This will be followed by inviting and providing sufficient time for comments and concerns to be raised, publicly or anonymously, about the nominated names. The final names will be decided by preferential voting among the staff, together with an option for vetoing a particular nominee, via secret ballot. All committee appointments will be subject to approval by the board.

Committee members shall be elected every 2 years, with a maximum extension of 2 terms endorsed by re-election. The endorsement of past members for re-election can be made during the process of nomination and preferential voting among the staff at the beginning of another term of the committee. The names and contact details of the committee members will be made available to all staff members.

Violations of the policy will result in disciplinary action, which, depending on the severity of the behaviour, can range from a verbal/written warning to dismissal. This course of action for complaints will be decided by the complaints committee, and communicated to the Himal Board. Terminations from employment will be subject to approval from the Himal Board.

It shall be the duty of Himal to take all steps to prevent sexual harassment in the workplace. To this effect, all employees will be provided with a copy of this policy at the time of joining the organisation, together with a detailed explanation of it by the employee’s supervisor. All efforts will be made to create awareness amongst staff of the rights of employees in a suitable manner.

In addition, Himal will also ensure that all employees are provided with appropriate work conditions to ensure that there is no hostile environment. There shall be no grounds for discriminatory treatment based on gender, race, caste, religion or sexual orientation. All employees will also be encouraged to discuss issues related to sexual harassment at meetings and in other appropriate forums. Himal and the committee will also maintain a list of resources for counselling and mental-health support should the aggrieved party want to access them.

Where sexual harassment occurs as a result of an act or omission by any third-party service providers or outsider (in the line of work), Himal will take all reasonable steps to assist the affected person in terms of support and preventive action.

Himal shall also, as a matter of policy, not entertain submissions from writers, or other general services from individuals found guilty, or accused substantially of sexual violence or harassment until the matter is legally or otherwise resolved.

This policy has been drafted based on the guidelines and norms laid down by the Supreme Court of India in Vishaka and Others Vs. State of Rajasthan and Others (JT 1997 (7) SC 384) and the International Labour Organisation’s sample sexual harassment policy.