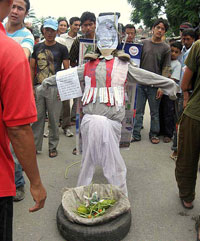 It is difficult to guess what Harischandra Agrawal had in mind when he penned his oft-quoted couplets on Matribhasha ke prati (Towards a mother tongue) in mid-19th century Benaras. The language of the poem is a mixture of Awadhi and Bhojpuri, and it is possible that a budding poet in the ambitious journalist had visions of glory for Bhojpuri. Awadhi had a rich literary tradition dating back at least to the 16th-century epic Ramcharitmanas. Even during the heyday of Persian in the Mughal Empire, Awadhi and Braj Bhasa managed to maintain their positions through connections to the court of Awadh. But despite being the mother tongue of a much larger population, Bhojpuri remained the language of the streets. It was a dialect that the rich and powerful in Benaras spoke to priests, peddlers and servants – even as they conducted religious ceremonies in Sanskrit, conversed with each other in Hindostani and transacted business with the British in English.

The pang that the status of Bhojpuri caused in the conscience of the educated middle class is perhaps understandable. But had Harishchandra known that his writings would eventually become the foundation on which the edifice of an artificial language would be erected, he probably would have written something in praise of his pitri-bhasha Prakrit or Sanskrit instead. Hindi has subsumed almost all indigenous languages of the Ganga plain, to emerge as the lingua franca of Hindostan and beyond in Southasia. The title that the pandits of Kashi conferred upon Harishchandra was Bharatendu, the ‘sun of Bharat’, and not a son of Bhojpuri. By writing a famous poem in praise of ‘one’s own language’, Harishchandra Agrawal of Benaras almost killed his ‘own’ language.

The belief that language changes at every river or hillock is common throughout Southasia. Until the rise of the Mughals in Delhi, there was no language that linked the entire Jambudwip. Scholars used Sanskrit to debate religious texts, little kings patronised the dialects in which panegyrics were composed in their praise, and merchants of the Ganga plain often spoke multiple languages. Urdu evolved as the common language of the Mughal army, in which soldiers spoke Rajasthani, Punjabi, Braj Bhasa, Awadhi, Bhojpuri, Magadhi and hundreds of other dialects, but were forced to follow edicts that emanated from urd (the royal camp) that were laced with Persian. Interestingly, the term urdi has continued to be used to denote royal orders until quite recently in Nepali, though presumably there will be no urdis in Nepal now that there is no king to issue them. But Urdu, the Mughal army’s common language, has become even more popular in its Hindostani avatar in Southasia, and among Southasians abroad.

In this, the role of Bollywood in popularising Hindostani cannot be overemphasised. If it were not for Choli ke Peechhe songs and Ab tera kya hoga Kaliya dialogues, Hindostani would not have gained the acceptability it today enjoys across Southasia. But politics are not as unimportant as politically correct opinion-makers try to suggest. Hindi is a mark of respectability in Afghanistan, where Sanskrtised Khadiboli differentiates a speaker from meddlesome neighbours from across the eastern border. In Bangladesh and Bhutan, Hindi competes with neither Bengali nor Dzongkha. If at all, the prevalence of Hindi proves the point of politicians in these countries, that Nepali in Thimphu and Urdu in Dhaka are somehow alien languages. In Pakistan, a Hindi-speaker is simply complemented for his good command over Urdu. Even in Sri Lanka, Tamils and Sinhalese alike have less dislike for Hindi than they have for each other’s language.

In addition to entertainment and politics, Hindi is being backed by a vast market. English-language newspapers make a big splash, and ‘ethno-national’ language telecasts are coveted by aspiring politicians everywhere. But all the while, it is the space between the two forces of globalisation and localisation that is expanding faster than both. Hindi newspapers are getting bigger and better, and taking increasingly larger shares of print advertising. Hindi television channels are riding on the popularity of soap operas that vie with each other for eyeballs, rather than with English- or regional-language programmes. But more than anything else, Hindi is now also accepted as the language of the elite, to which the rest can aspire without fear of being labelled behenji, bhaiya or desi.

The credit for establishing Hindi in the corridors of power should go to the (dollar) millionaires that have made their fortunes in the post-1990 free market of Southasia. When new entrepreneurs in Colombo, Calcutta, Karachi, Kashmir, Kathmandu, Manipal, Mumbai and Manipur assemble, they easily lapse into Hindostani after ritual introductions have been made in formal English. Hindi is now a language of business; and when money talks, everybody listens. No wonder, leaders that function as facilitators between business and politics such as the Samajwadi Party’s Amar Singh, the Congress’s Jairam Ramesh or the Communist Party of India (Marxist)’s Sitaram Yechury often speak chaste Hindi.

Culturally, victims of Dravidian politics in Tamil Nadu have done more to establish Hindi than perhaps they themselves realise. When opportunities for employment shrank at home due to large-scale reservations for ‘backward’ classes, the so-called Tam-Brams made a beeline for foreign shores. There they were confronted with Bongs, Gujjus, Pajis and Mallus exchanging cassettes of Kishor Kumar’s songs with Sindhis and Marwaris. Ever since, there has been no stopping the popularity of Hindi, and now they exchange Ranvir Kapoor-Deepika Padukone DVDs. The symbolism of H D Deve Gowda reading Hindi speeches written for him in Kannada script, or Sonia Gandhi struggling with the text of Roman Hindi, is powerful, but the medium receives more media attention when Lalu Yadav uses it to woo Silicon Valley stalwarts or Harvard graduates at PIO and NRI jamborees.

Hindi hungama
In ‘Bollywood Hindi’ – a hybrid Hindostani purveyed by one of the biggest film industries in the world as the authentic lingua franca of the hoi polloi – the word hungama is used to signify a mixture of agitation, excitement and commotion. Something similar happened in the erstwhile Kingdom of Nepal, when its newly elected vice-president of the republic, Parmanand Jha, chose to sign his official pledge in Nepali but to recite the oath of office in Hindi.

Soon after the official ceremonies were over, hyper-nationalists began to burn tyres in the streets of Kathmandu, competing with each other in deriding the judgement of the second most exalted position in the republic. Farther down the chain, mere nationalists were happy that the vice-president’s deviance from the norm had not gone unchallenged, while semi-nationalists opined pompously that everyone should have shown restraint – the implication being that the VP was merely reaping what he had sown. Meanwhile, soft nationalists were willing to offer the offender a chance to apologise, on the condition that he should promise not to repeat the mistake in future. Poor Vice-President Jha was vilified in the media as irrational, irresponsible and anti-national. Even executive members of the Nepal Bar Association decided to decry the legality of what was clearly a political action.

Criticism of Nepal’s new vice-president from activists committed to the advancement of local languages was somewhat understandable. Jha’s ambivalence towards his own mother tongue, Maithili, was justifiably deplored by members of his own community. But promoters of Nepali were being unnecessarily parochial and paranoid. After all, the promotion of Hindi would probably benefit Nepali more than any other language of Nepal’s plains. The situation is similar to every other country of Southasia, where propagation of Hindi justifies expansionist policies of state-sponsored ‘national’ languages.

Any local, regional or global solidarity needs a language that ties them together into a garland. No matter how hard they try, the French and the German cannot resist the recognition of English as the main link language of the European Union. American hegemony has similarly established English as the official language of ASEAN. The shared colonial past likewise made the pioneers of SAARC accept English as the organisation’s language of operation. Perhaps now is the time to introduce Hindostani as the alternate official language of the SAARC. Doing so should help to allay the fear of street patriots in Nepal, and make every Southasian feel that the Mumbai Masala churned out by the Bollywood Dream Machine is at least partly their own.