Skip to content
Dialectical > The holy grail of language preservation 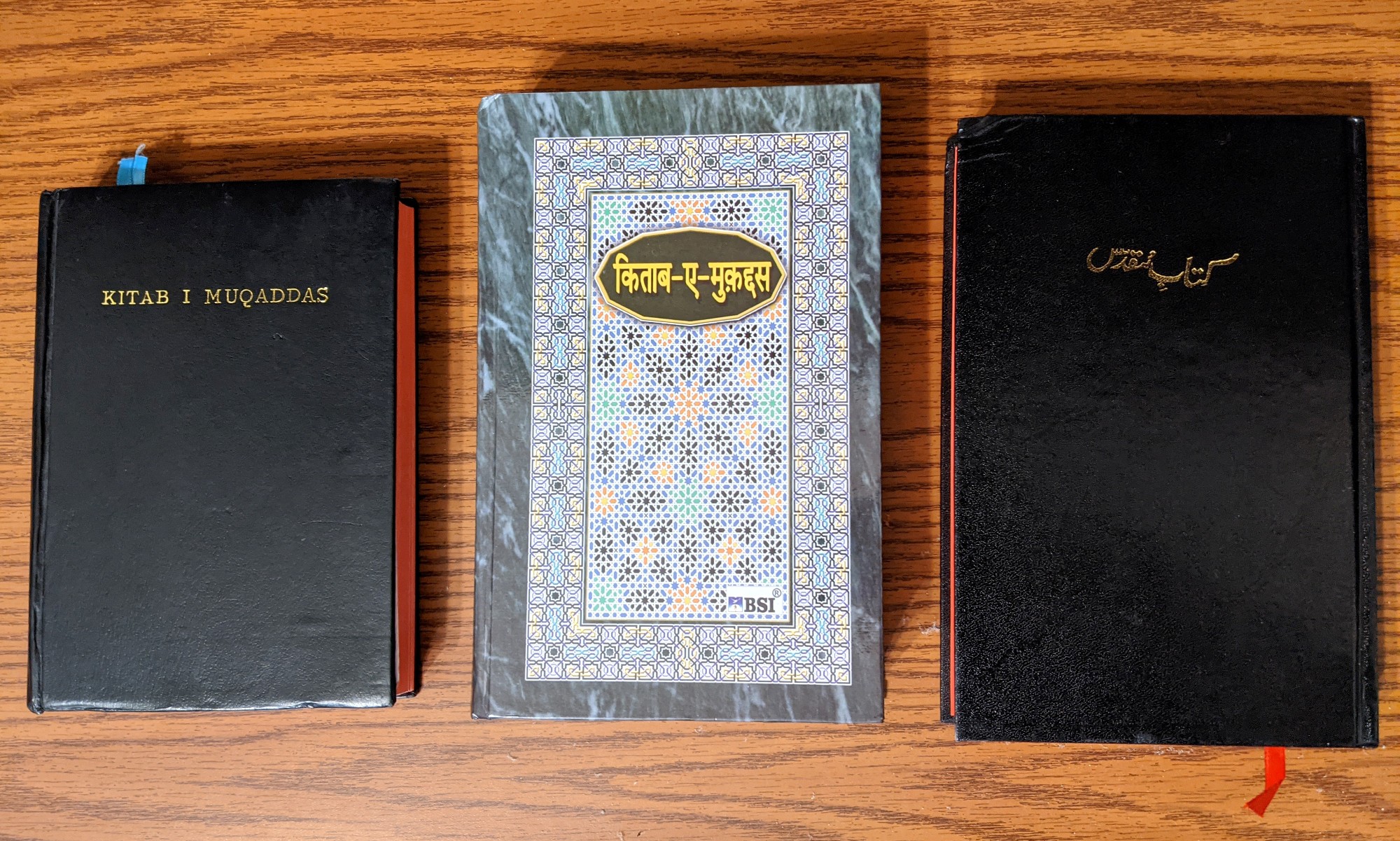 Nobody has made a greater contribution in documenting and conserving vulnerable languages on a global scale than Bible translators. In translating the Bible, many scholars initiated the preparation of grammars and dictionaries for various unwritten and undocumented languages, thereby documenting, standardising and preserving them. While the Bible’s original text is in three languages: Hebrew, Koine (common Greek), and Aramaic, according to Wycliffe Bible Translators, as of 2021, the complete Bible has been translated into 717 languages. An estimated 1582 languages have at least the New Testament translated, and a further 1196 languages have some portions of the Bible translated. Many of these translations are also in Southasian languages belonging to six language families: Indo-Aryan, Dravidian, Austro-Asiatic, Tibeto-Burman, Andamanese and Kra-Dai. Here is the intriguing story of Bible translations in Southasia.

Bible translation in Southasia traces its history to the arrival of Portuguese traders on the shores of India and Sri Lanka in the early 16th century. Four Franciscan missionaries arrived in Sri Lanka in 1545 during the reign of Bhuvanaikabahu VII of Kotte. Although not a Bible translation per se, these missionaries produced Christian literature in Sinhala, thereby bringing biblical words into the language. In the later centuries in the region, the growth of European imperialism further brought missionary zeal to spread the ‘word of God’ among its subjects.

One of the earliest attempts to translate Christian scriptures was under the patronage of a Mughal emperor. In the 16th century, Father Jerome Xavier (1549-1617), a Spanish Jesuit missionary to the Mughal court of Akbar and his son Jahangir, produced the earliest known Bible translation in Southasia. While living in the Mughal capital cities of Lahore and Agra, Xavier, with the help of court historian Abd al-Sattar Ibn Qasim Lahori (1590-1619), prepared a Persian translation under the title Mirat al-Quds (Mirror of Holiness), which he presented to Emperor Akbar in 1602. To prepare this translation, Xavier utilised several textual sources in Latin Vulgate, Greek, Syriac, and Arabic on the Old Testament, the New Testament, and the apocryphal gospel texts.

But even before that in 1554, Vicente de Nazareth, Jorge Carvalho and Thome de Cruz, three persons of Indian origin living in Lisbon (Portugal), translated a Portuguese catechism (Cartilha) into Tamil in Roman letters. (A catechism is a manual of religious instruction containing a summary of the principles of the Christian religion, especially as maintained by a particular church, in the form of questions and answers.) This bilingual primer of Christian prayers and doctrinal principles was intended for use by Portuguese missionaries, before they departed for southern India.

On the other side of the subcontinent in Goa, Father Thomas Stephens (1549-1619) from England was translating Christian literature into one of the vernacular languages of Southasia. In 1622, his Doutrina Christam em lingoa Bramana Canarim (Christian Doctrines in the Canarese Brahmin Language) was posthumously published. It was a catechism written in Konkani language. Stephens’ translation was based on a catechism in Portuguese written by Father Marcos Jorge (1524-1571). Stephens also wrote Kristapurāṇa (published in 1616) in Marathi-Konkani, retelling Biblical stories in the format of Indian devotional poetry.

Bible translation in Southasia traces its history to the arrival of Portuguese traders on the shores of India and Sri Lanka in the early 16th century.

Few of us know that the first book ever printed in a Southasian script was Doctrina Christam en Lingua Malauar Tamul (Thambiran Vanakkam in Tamil), a Tamil translation of a Portuguese catechism. It was written by a Portuguese Jesuit priest Henrique Henriques and published in 1578.

However, the watershed moment in Bible translation in Southasia came with the establishment of Serampore Missionary press (in Srirampur, north of Kolkata) in 1800 by three Baptist missionaries, William Carey (1761–1834), Joshua Marshman (1768–1837) and William Ward (1769–1823). Serampore was a settlement under the protection of the Danish mission and was politically independent of British India, where missionary activities were forbidden. Over the first four decades of the 19th century, Serampore became the centre of bible translation in Southasia. Between 1800 and 1840, it translated and printed Bible translations in not less than forty Southasian languages and dialects, as well as in Persian, Chinese, Javanese, and Malay. Carey himself translated the Bible into Bengali, Odia, Marathi, Hindi, Assamese, and Sanskrit. Here is a list of translated books in Southasian languages, published by Serampore Missionary press until 1841.

While Serampore Missionary press was engaged in this momentous task of translating and publishing the Bible in Southasian languages, on the other side of the world, the British and Foreign Bible Society (BFBS) was founded in London in the year 1804, aiming to translate and distribute the Bible in the vernacular languages of the British empire. BFBS was the first to institutionalise the activities of Bible translation in a unified manner. While earlier scholars worked in isolation, the later translations were coordinated efforts of specially formed committees facilitated by BFBS. In 1811, the first auxiliary of BFBS in Asia was established in Calcutta, and later auxiliaries in Colombo (1812) and Madras (1820) were formed. In 1944 the Bible Society of India and Ceylon was carved out from BFBS. In the 1960s, the Bible Society of India, Ceylon Bible Society, and Pakistan Bible Society became independent bible societies on their own but remained under the global fellowship of the United Bible Society. The Independent Bangladesh Bible Society was formed after the Bangladesh Liberation War of 1971. The Nepal Bible Society was established in 1975, although it was recognised by the Nepalese government only in 2007. There is no existing bible society in Maldives.

Many of the lesser-known languages do not have a great corpus of published literature, and in many cases, Bible translation is the first book published in the language.

Bible in many mother tongues

Translating the Bible in a linguistically diverse region like Southasia has always remained an uphill task for translators. Various individuals, societies, and organisations have contributed to the translation of Christian scriptures in the region. In the following paragraphs, I provide names of Southasian languages in which the Bible has been translated either fully or partially. Each language name is hyperlinked to one of the most recent and popular versions of Bible translation in the language:

Bengali (Bangla) is the official and national language of Bangladesh. According to a 2022 database of languages by Ethnologue (a regularly updated encyclopedic book cataloguing all of the world’s known living languages), there are 42 languages spoken in Bangladesh. Out of these, 36 are spoken by ethnic minorities. Translations of the Bible are available in the following languages of Bangladesh:

There are around 23 languages spoken in Bhutan (Ethnologue 2022). The three most spoken languages are Dzongkha, Nepali and Tshangla. National language Dzongkha (ie, ‘the language of the fortress’) is related to Old Tibetan and belongs to the Central Bodish group of Tibeto Burman languages. The Bible is translated in the following languages of Bhutan:

There are 447 living languages spoken in India (Ethnologue 2022). There are 22 languages recognised in the eighth schedule of the constitution of India with Hindi and English as its official languages. Translated Bibles are available in the following scheduled languages of India:

According to the National Population and Housing Census (2011), Nepal has around 123 living languages. These belong to four distinct language families, namely Dardic (Indo-Aryan), Bodish, Eastern Himalayan Baric, Tibeto-Burman, Munda (Austro-Asiatic) and North Dravidian. Nepali is the official language and lingua franca of Nepal.

The Bible is translated into the following languages of Nepal:

There are 77 living languages in Pakistan according to Ethnologue (2022), belonging to six language families: Iranian, Indo-Aryan, Dravidian, Dardic, Nuristani, and Sino-Tibetan. Urdu is the national language and lingua franca of Pakistan. Along with English, Urdu is also the official language of Pakistan. Apart from the two, there are five main languages, namely Punjabi, Pashto, Sindhi, Saraiki and Balochi.

The Bible is translated into the following languages of Pakistan:

Ethnologue (2022) enumerates that Sri Lanka is home to twelve living languages. Sinhala and Tamil are the two official languages. Apart from these two, there are some lesser-known and endangered languages such as Vedda creole, Portuguese creole, Sri Lankan Malay and Rodiya.

The Bible is translated into the following languages of Sri Lanka: