As local journalists organise in defence of Afghanistan’s fourth estate, the success of April elections remains crucial for the media’s future. 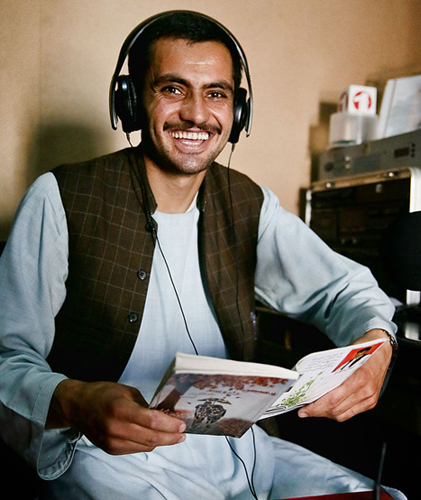 Shaffiqa Habibi, director of the Afghan Women Journalist Union, is concerned at the declining number of female voices within the Afghan media. Despite the industry’s significant growth since the overthrow of the Taliban, journalism remains a dangerous occupation. “Over all it is difficult to be a journalist in Afghanistan,” she says, adding, “but being a female journalist in Afghanistan is even more dangerous”. She has a point. It is estimated that of 2,300 female journalists, about 300 had left the profession as of mid-2013, primarily due to concerns of personal security, as well as familial pressure. “Women are constantly harassed and threatened by officials, unknown people, and some family members, so it makes it difficult for women to work in the field of media, even though it is very important that we have female reporters to reflect the challenges that Afghan women face in this country.”

While the disincentives female journalists experience are unique in many ways, they are symptomatic of broader issues of access and security faced by an industry whose mandate it is to question authority and challenge ideas. As the foreign media covering Afghanistan focuses on NATO troop levels and the Bilateral Security Agreement that would keep them there, Afghan media have been more concerned with the ramifications of the 5 April presidential elections. They know it is not the number of foreign troops that will determine their future, but whether or not Afghanistan will be able to stage a credible election that will help the country become a modern state and provide the stability necessary for progressive media reform. For the future of independent journalism in Afghanistan, the stakes are high.

Anatomy of an industry
If measured solely in terms of the number of news organisations, the growth of the Afghan media is a development success story. The tally varies, but there are about 175 FM radio stations, four news agencies, 75 TV channels, seven daily newspapers and hundreds of other publications. About half the population of 29 million own mobile phones while Internet cafes are not uncommon in major cities. Kabul alone has 42 radio stations and 30 TV channels. Smaller cities have 10 to 25 TV channels and around 20 radio stations each, according to the American-funded Center for International Media Assistance at the National Endowment for Democracy. They would know: much of the money for media development came from the United States.

The Afghan press corps, though tested under fire, is still very young and, to some extent, lacks professionalism. In the years prior to the elections, foreign media had begun outsourcing  ground level news-gathering to reputable local Afghan reporters – those with the experience, bravery and reliability to go where foreign news agencies were reluctant to send their employees. While the 2014 endgame has driven something of an upsurge in foreign coverage and the overseas staffing necessary to do the job, it will be mostly Afghan reporters in the field covering the news in the long term, be it for local or foreign news organisations.

As the foreign press corps departs along with the bulk of the Western military involvement, Afghan journalists remain under pressure at the local, regional and national levels. Threats and harassment have come from all players on Afghanistan’s political stage: the government, the military, the security apparatus from the village level to the capital, and regional and ethnic strongmen who seek to return to power. Add to that a whole array of insurgent groups, some with a national agenda, others only seeking to reclaim a local mosque or enforce stricter adherence to their interpretation of Islam.

In its year-end report, the Afghan Journalists Safety Committee (AJSC) recorded 35 incidents of violence and threats to journalists in the second half of 2013. Government officials were responsible for 63 percent of the incidents, the Taliban for 17 percent, and warlords and unidentified groups and individuals just 12 percent. Security forces were responsible for the remainder of the cases. Still, for all of the daily violence, relatively few Afghan journalists are killed on the job, or directly targeted for what they have written. The country ranks 12th on CPJ’s list of dangerous countries, well behind Iraq, the Philippines and even neighbouring Pakistan.

The AJSC says the government’s propensity for directing violence toward journalists increases the distance and animosity between media and government, creating a cycle in which the government abuses media and the media acts out its resentment by reporting overly critically on government affairs. What has evolved in the post-Taliban decade is not a sense of reporting critically about the government, but of reporting resentfully about it. Most government leaders have not grown beyond seeing the media as at best bothersome and at worst an outright enemy. Afghan reporters constantly complain that they have no access to government figures beyond reporting on their public appearances, and journalists say their requests for information from government offices are almost always ignored.

Add to that a more worrisome trend: the Afghan media has become increasingly politicised as April elections draw near. Most political players of any stature own broadcast facilities, some of them surprisingly well equipped. They are openly partisan in their presentation of news and discussion of current events. Though the term is supposed to be disparaging, Afghans often refer to news broadcasts as ‘Warlord TV’ with a hint of humour tinged with resignation. Many, but not all of the media houses reflect the views of the country’s regional political leaders and power brokers, segmented along the lines of the civil war that followed the Soviet withdrawal in 1989. Many owners are government ministers or other high-ranking officials with deep regional and ethnic power bases. They worry very little (if at all) about reliable journalism. Their goal is to use media to their own ends, and ensure that they stay in power.

Given the depth of their financial involvement, the influence of America and other western nations is obvious to sophisticated media consumers, if not the general public. But increasingly, other outside players like India, Iran and Pakistan are exerting their influence on Afghan media. Some of the media houses are openly aligned with their patrons, while others, trying to survive in a competitive market with little advertising revenue, are willing to accept financial support from anyone just to stay alive.

Organising a future
The government has never had a coherent media policy, and proposed changes to media law have come and gone, driven primarily by the personalities of the head of whatever ministry felt it had the right to implement their vision of what Afghan media should look like. It will be the administration elected in April that will set the long-term policy course.

As early as 2006, local and international pressure was being brought on President Hamid Karzai to resist demands from intelligence officials who had taken it upon themselves to issue guidelines to local and foreign media groups that would restrict the freedom to report. In 2008, reforms proposed by a coalition of media groups floundered when Karzai refused to back them. In July 2012 the media community had to quickly organise itself to head off a sweeping rewrite of the law which would have given a Media Supreme Council, headed by the information minister, the power to determine what could or could not be reported – including vaguely defined restrictions on national security and religious affairs.

The most recent onslaught, in 2013, was eventually turned back at the parliamentary level, again by journalists’ organisations that had come together to write letters of protest to Karzai’s office and lobby members of the legislature. And again, the proposed revisions would have restricted the ability of media to debate or report on areas such as national security and religion. For now –for better or worse – media reform is on the back burner. Expect it to re-emerge if April’s elections result in a stable government. But if there is political chaos, issues such as media law will be moot.

An upside to the pressure experienced by Afghan journalists has been that credible Afghan media organisations are starting to coalesce. In the years when development money was pouring into the country, many groups organised themselves, claiming to represent Afghan journalists and media organisations. But their eyes were more on the funding flow than on increasing their organisations’ reach or political power. Several groups have come and gone, leaving behind little more than moribund websites. But as the aid money has dried up and the pressures on the profession have mounted, a few organisations have emerged that might form the nucleus of a professional body. Still, despite some effort, none have been able to establish a nationwide structure.

Increasingly, Afghan journalists and media organisations self-identify as a distinct interest group. As such, they face many common problems, no matter if they are in Kabul or in the provinces. Increasingly well-organised at the local level, the problems facing Afghan professional media organisations are not unlike those facing the central government: is centralisation preferable, or should a structure straddling a looser confederation of regions be organised? As it stands, local media organisations have met with mixed success when confronting the groups threatening them with violence on a daily basis. Clearly, journalists need wider national support to effectively protect themselves on the ground. So far no group has emerged to build that national umbrella organisation. Not for journalists, and not for the country as a whole.

~This article is a part of Reclaiming Afghanistan: web-exclusive package.

~ Bob Dietz is the Asia Program Coordinator for the Committee to Protect Journalists (CPJ). A former journalist, he has traveled and reported from Asia since the 1980s. This article is based on a previous essay in ‘Attacks on the Press,’ published by the CPJ.