Skip to content
COVID19 > How free is the media in Southasia?

How free is the media in Southasia?

Governments are finding new ways to silence the press thanks to COVID-19. 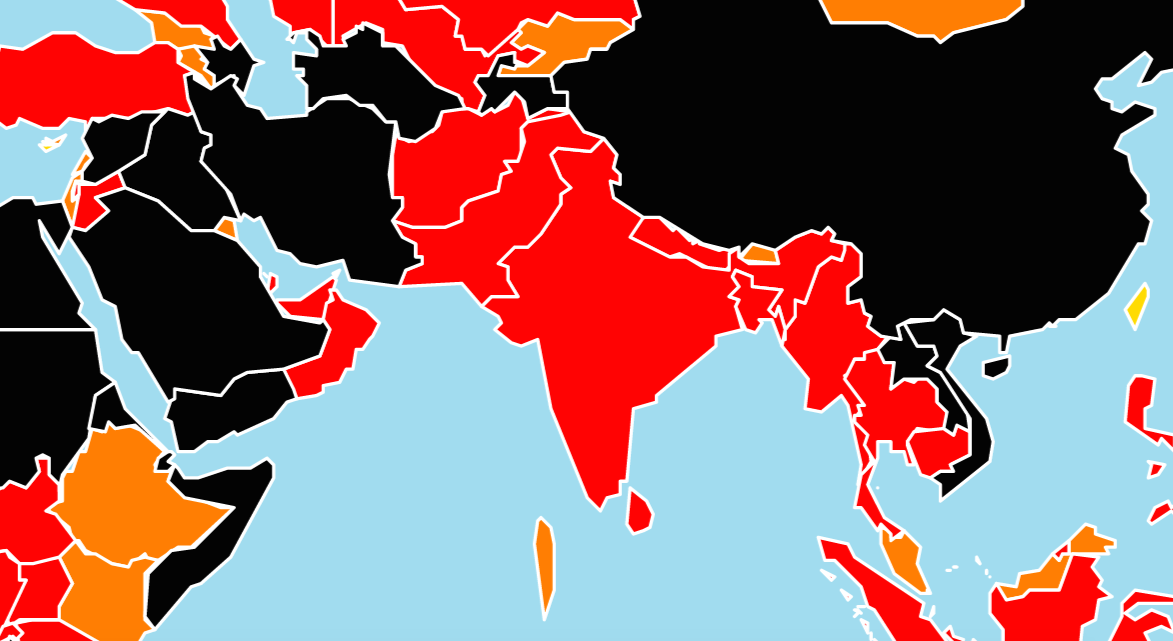 Photo: Reporters Without Borders. (Scroll down for RSF’s press-freedom index of countries in Southasia.)

On 3 May 2020, the world marked World Press Freedom Day under the shadow of the COVID-19 outbreak. With a large part of the world under lockdown, journalists have improvised and tried different mediums to tell their stories. Meanwhile, in the guise of responding to the crisis, governments have found new opportunities to restrict journalistic freedoms, as well as free speech in general.

In Southasia, such restrictions have come in many forms, from controls on news gathering and expression, to legal harassment, arbitrary arrests and physical violence. In almost all instances, this has been done without legally invoking emergency-time regulations.

While criminal defamation has so far been widely used to intimidate critical reporters, cracking down on ‘fake news’ is quickly becoming the new tool of choice.

Several Bangladeshi journalists have been detained or assaulted by the police, while the Digital Security Act continues to be abused to intimidate the media in connection to COVID-19 reporting. In India, the government unsuccessfully tried to force the media to report only officially sanctioned information, while the Uttar Pradesh government has filed criminal charges against Delhi-based The Wire for “creating or promoting enmity, hatred or ill-will between classes”. Sri Lanka’s Human Rights Commission has written to the police, concerned about the arrests made (at least 17 so far) for spreading misinformation on social media about COVID-19; recently, the police also warned the public including media organisations that they would take action against those who criticised state officials’ response to COVID-19. The Myanmar government has asked phone operators to block over 200 websites, including those catering to ethnic minorities, purportedly for spreading ‘fake news’. In Nepal, a bureaucrat was picked up from his home after making social-media posts critical of the prime minister’s response to the outbreak, while the state-run radio service removed an interview with a former prime minister that was also critical of the prime minister. Pakistani journalists, meanwhile, marked press-freedom day by protesting the continued detention of editor-in-chief and owner of Jang Group, a major media house in the country.

Less discussed is how the COVID-19 crisis has exacerbated the financial woes of media organisations and journalists.

Since press-freedom laws still provide some protection to those working in media organisations, states have for the last few years targeted the social-media activity of both journalists and the wider public. Countries in the region have frequently used overbroad provisions of online-regulatory laws to do so. And while criminal defamation has so far been widely used to intimidate critical reporters, cracking down on ‘fake news’ is quickly becoming the new tool of choice.

The Reporters Without Borders’ (RSF) World Press Freedom Index provides a useful metric for keeping track of press freedom in countries around the world. Here’s how countries in Southasia fare on the RSF’s ranking. We have found that the direction of a particular country’s movement in the index is more useful an indicator than the actual ranking to make comparisons across countries. As the chart shows, the current media environment in Southasia is worse off than it was last year.

Less discussed is how the COVID-19 crisis has exacerbated the financial woes of media organisations and journalists. Over the last decade, media organisations have struggled to respond to a shrinking revenue stream, caused by a mix of interrelated factors – from the online migration of content to the decline of traditional advertising. The shock of COVID-19 has, therefore, hit hard. Around Southasia, corporate media houses as well as smaller newsrooms have let journalists go, stalled or cut their salaries, or sent them on furloughs. One study of media organisations done by Splice Media, a Singapore-based company that supports media startups in Asia, found that more than half of the respondents felt COVID-19 was negatively affecting their business. Over 40 percent of the organisations said they would be cutting jobs over the next year.

The creeping digital-surveillance regime, now amplified by the pandemic, and the unresolved question of financial sustainability, will likely hurt credible journalism in the region. Southasia’s independent media have challenging days ahead, with the rising clique of xenophobic media as well as intolerant governments on their tails.