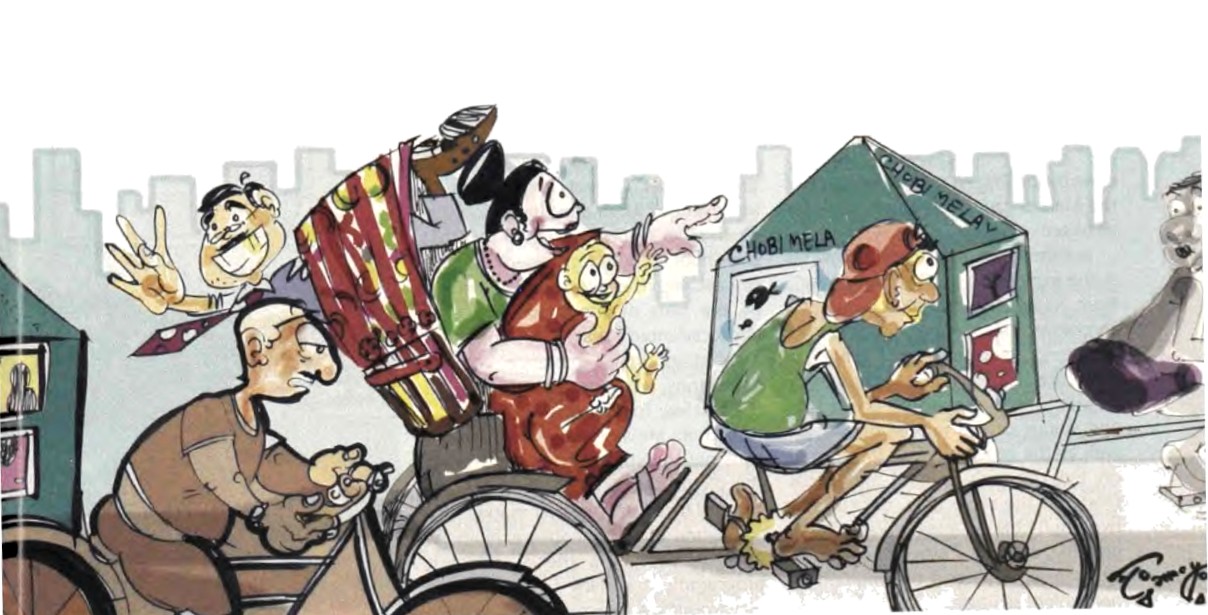 Two little boys – one brimming with curiosity, the other a bit fearful – peep through a gaping hole in a wall, the result of a bomb blast on a police post in Nepal. A little distance away are the smiling eyes of Nelson Mandela, offering a glimpse into the story of the South African freedom struggle. These were just two of the photographs that caught the imagination of visitors to the Chobi Mela, held in late January at the Bangladesh National Museum in Dhaka. The fifth instalment of this international photography festival opened with a remarkable video-linked conversation between Indian activist and writer Mahasweta Devi, who was present as the guest of honour, and the American thinker Noam Chomsky, on the festival theme of ‘freedom’. Emphasising the role of cultural activists in bringing about societal transformation, Mahasweta Devi said, “We live in an age when people are uniting, protesting all over the world against injustice, and are in search of freedom, which embraces a significant facet – cultural freedom.”

With a nod to the anxieties of the times, the festival’s view of freedom was neither dogmatic nor over-romanticised. “What mask does freedom now wear?” festival director Shahidul Alam wrote in his introductory comment. “Freedom to profit is the new elixir. Freedom to reach distant markets, to exploit cheap labour. The word that takes us to such dizzying heights leaves the deepest of wounds with its loss. ‘Foreign’ sounding names, ‘wrong’ coloured skin, ‘different’ passports, circumscribe our new freedoms.”

With the photographers interpreting the notion of ‘freedom’ in myriad ways, extremely diverse imagery was on offer, ranging from comic drawings to a replica of Mandela’s prison cell on Robben Island. The highlight, however, was undoubtedly the “Bangladesh 1971” exhibition, featuring the work of veteran photographers Rashid Talukder, Abdul Hamid Raihan, Aftab Ahmed, Bal Krishnan and Mohammad Shafi – images that almost did not even exist any longer. More than a hundred black-and-white negatives of photographs taken by these artists, bearing immediate witness to the period surrounding the War of Liberation, had almost been destroyed by fungus. With this exhibition, the result of the restoration and preservation work that has been done by the Drik Picture Gallery (one of the Mela organisers) was on show for all to see.

Another extraordinary set of images in the exhibition was “A People War”, from Nepal. This travelling exhibition chronicles the country’s decade-long insurgency, focusing particularly on how the conflict affected ordinary Nepalis. The photos speak powerfully and starkly of the trauma of war, as well as the rending effect that it had on the country’s cultural and social fabric. At the same time, the cumulative result of these images was notably uplifting, creating a tapestry of stories of survival, hope and the triumph of non-violent struggle.

Over the past five years, the Chobi Mela has become widely recognised for what is said to be the most diverse participation of any photography event worldwide. This year, the festival boasted over 60 exhibitions, 35 participating countries and well over 1000 images. There were also more than 50 visiting artists from Asia alone. But the festival is not focused solely on exhibition. The hundreds of participants were also immersed in dozens of workshops, weeklong presentations, debates, lectures, discussions and portfolio reviews.

While most major photography festivals tend to be held in the West, or to be organised by Western curators, the Chobi Mela is thoroughly home-grown. In recent years, it has generated some of the most fervent anticipation of any event of its kind in the region. Yet much of its success lies in the fact that the Chobi Mela has provided a means of reaching the average Bangladeshi by the tens of thousands – a truly unprecedented mass audience for a photography experience. Mobile exhibitions are now a trademark of the festival; for months afterwards, a mini-Chobi Mela on ten cycle-powered vans ply the streets of Dhaka, taking the pictures directly to the public in football fields and open-air markets.

Beyond this, the mobile exhibitions are also part of a special outreach programme, travelling to schools and playgrounds. A community liaison from the festival accompanies each of these shows, explaining the context of the images to groups large and small. This year, for example, “Blood Splinter of Jute” was an exhibition on the plight of Bangladeshi jute-mill workers by Munem Wasif, which was shown on the walls of the courtyard of the Kalpana Boarding, a low-cost motel in the old part of Dhaka. Such innovations have managed to reach out to the less privileged, a model that has now been replicated cross the globe, from Sri Lanka to Bolivia, Mongolia to Tanzania.

This act of reaching out, as far as possible, is clearly central to the festival’s focus. “Going beyond walls built to occupy territory,” director Alam wrote in conclusion. “Beyond bombs dropped to coerce the unarmed. Beyond cells built to hold the other. Artists paint with colours that don’t exist. Write with words as yet un-invented. Photograph where light is yet to reach.”

~ Syed Rashad Imam (Tanmoy) is an assistant editor at Unmad, a monthly satire magazine from Bangladesh, as well as a contributing cartoonist for Jaijaidin and Prothom Alo.