Skip to content
Culture > In the shadow of Shanta’s absence

In the shadow of Shanta’s absence

A conversation with filmmakers in Kathmandu 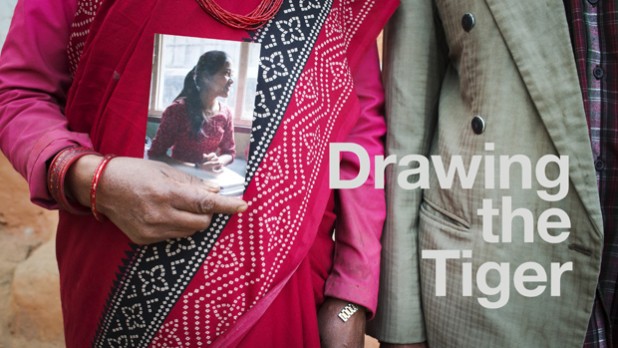 Drawing the Tiger, the opening film at Film Southasia’ 2015, begins as an emancipatory fable of development. It traces the story of a young girl, Shanta Darnal, who receives a scholarship and leaves her poverty-stricken family in a mountain village in Nepal to study in Kathmandu. The narrative takes a tragic turn when Shanta commits suicide, leaving her family to cope with their lives and shattered hopes. The title draws on a fable recounted by Shanta’s father in the film: of a man who has been told he will be killed by a tiger. He tries to protect himself with guards, but when he draws a tiger to show the guards the creature they must guard him against, the illustration comes alive and devours him. The tussle between fate and human agency, dreams and destiny forms the heart of the film. Directors Amy Benson and Scott Squire, a Seattle-based couple, spoke to Taran N Khan about their journey.

Taran N Khan: How did you get to know Shanta?

Amy Benson: We have our own production company in Seattle called NonFiction Media. We were hired to make a film by an organisation that works from the US, providing scholarships to girls in Kathmandu valley. They asked us to profile three girls they were supporting and show how the scholarships were helping change their lives. So it was about the power of girls education, and Shanta was one of the girls they chose.

AB: She was so kick ass. She was from a very poor village but she learned English in about a year, she was super bright. On that trip we met her and Kumar, her (elder) brother and his wife, and filmed with them. She told us she was going to be a doctor and would go back to her village. She was adamant that the reason why her family was so poor was because her parents had too many kids, and she said she was going to go back and teach women about birth control. Even at that time, I knew she would be an amazing subject for a documentary. But it was meant to be a very different film. We returned to the US and made the promotional video. I wrote a lot of applications for grants to come back to Nepal and film her, and amazingly we got one of the grants. Two weeks later we got a phone call from the NGO [saying] that she [Shanta] had killed herself. After that everything changed. It didn’t make any sense to anyone. I ended up using the grant money to come back a month after she died, and on that trip we didn’t even take out the camera.

TK: How did the film continue in the shadow of Shanta’s absence?

AB: Weeks after she died, the organisation asked us to take her out of the promotional video. They were not interested in going forward with her story. Their reasoning was simply that there are a 199 other girls [that they had given scholarships to], why not tell their stories? It was during the process of literally deleting Shanta from the video on my computer that we decided we had to do something.

Around this time we met Ramyata Limbu (Nepal-based journalist and co-director on the film). And at the same time these statistics had just been released, that revealed that suicide was the leading cause of death among women and girls in Nepal. It seems naïve, but at the time we thought we would figure out why these women are killing themselves, using Shanta’s case. But after talking to so many people, we realised we will never know why she did it.

TK: What was the response of the family to your filming their grief?

AB: The Darnals opened up literally five minutes after us getting to the village.

Scott Squire: The best idea we have about why (they opened up) is that they are so busy with their work and their land everyday. And they couldn’t afford to come to the city when Shanta died, they weren’t there for her funeral. They had had no closure and no time to mourn. Our coming there, and our being guests, gave them the occasion to mourn; so they did it with us.

As humans we all want to do something, be somebody in the world, and it’s that struggle; of how much do we go against our fate or destiny?

TK: How long did the film take to complete?

AB: The first trip was in April 2008 when we filmed Shanta. We returned in 2010. Then we returned to film in 2011 and then 2013. But it took shape towards the very end, when Shailendra Karki, our assistant DP, was able to capture the footage of Kumar preparing to leave for Malaysia (as a migrant worker), that gave us the closure to make the story.

Our biggest struggle was being so close to the material. It was hard to see where Shanta’s death fit in the narrative. Funders had a big problem with it, because by its very nature, suicide doesn’t have an answer or solution, and as a story that’s a hard thing. We tried having her be the main character, but the truth is we only had a couple of days of footage of her, and we didn’t really know her.

TK: So what is the film finally about?

AB: Ultimately, it is about the story of drawing the tiger. As humans we all want to do something, be somebody in the world, and it’s that struggle; of how much do we go against our fate or destiny? Can we change it? In American culture it’s inbred in us that you can be anything you want, you can be the president, but here obviously it’s different. There is the idea of a pre-written destiny. Shanta chose one direction – to take her own life. Kumar is trying to do what so many Nepalis do, of going from the village to the city, and then from the city to another country (to work). And Sarita, the younger sister, is like “I want to go to the city, give me a shot”. All these ways of dealing with your circumstances, they depend on your personality.

TK: It’s interesting that the film takes the idea of education as a panacea, and then complicates that promise.

AB: When the film began, we were those people (who believed in this promise); we really did believe that Shanta was going to make it. Why wouldn’t she? So when she died, it affected us. And the reactions from people when we wanted to continue were revealing. We were asked, “Why would you want to turn people against girls’ education?” People were afraid to hear stories that didn’t work. But everything is complex

SS: We are very much at pains to not undermine the value of education in empowering girls, but we want to do it better. It’s a big responsibility to present these radical opportunities. Shanta was very proud, and she had a fierce intellect. She saw she could theoretically do anything with this opportunity she had been given. But she also saw that it would be practically impossible for her given the obstacles of caste, class and gender.

TK: How did you manage to deal with being privileged outsiders filming in a very poor village?

AB: Clumsily. (Laugh) Ramyata is really good at her job and she helped us figure out the political part of it. But even our small crew had equipment that cost more than the village cost. So those questions were always there: what were we doing; why don’t we just give them the money; what is the job of the documentary in these conditions?

TK: Shanta’s family watched the film on the opening night of the FSA. What has their reaction been to what they saw?

SS: What they said is what we heard them say right after they saw the film initially: it’s kind of awkward and some parts are embarrassing, but this is our life. They still want their kids to be educated, but they are stuck between the economic reality of trying to do this and the practical reality of them having less hands to work.

TK: Are you planning to keep the link with them alive?

AB: We are going to go to the village, with our son. We want to learn Nepali.  We have a connection to this place, and we will know them forever. After the screening, we heard from a lot of people who want to help, and who have ideas. It’s still unfolding, what this film is going to do.

~ Drawing the Tiger won the UNICEF Award for the best film on children’s issues at Film South Asia’ 2015.

~Taran N Khan is a Mumbai-based journalist who writes on cinema, Islam and gender. She has been traveling to Kabul since 2006 where she worked closely with Afghan media producers and filmmakers. Her work can be seen at www.porterfolio.net/taran.

~This article is part of a series of column on cinema by Taran N Khan for Himal Southasian. Read her earlier column on Yirmiyan Arthur Yhome’s documentary, This Road I know.