Skip to content
Crossborder > Introducing Southasiasphere: The Himal guide to the region

Introducing Southasiasphere: The Himal guide to the region

ISSUE #1: Covid-19 in Southasia, civilian government vs the generals in Myanmar, postponed elections in SriLanka and more. 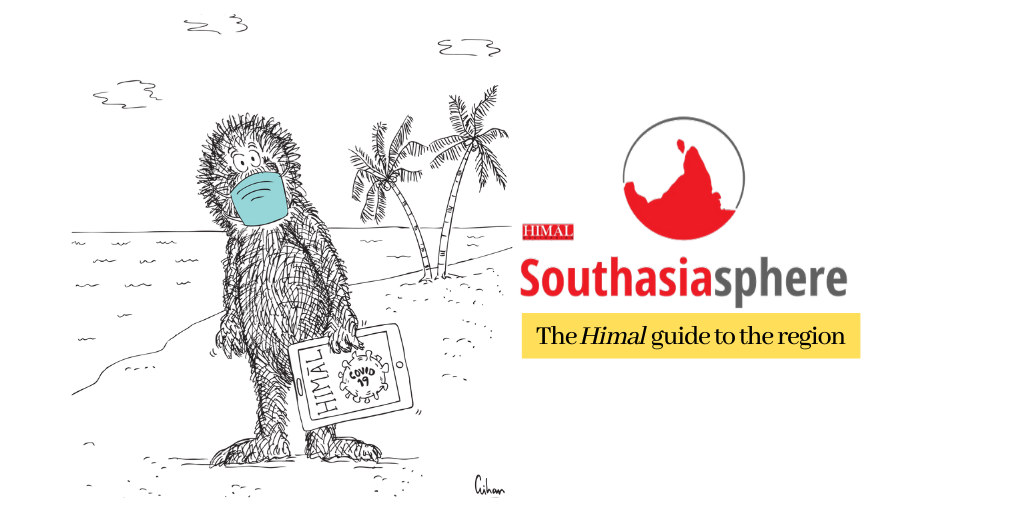 This week we’re pleased to launch Southasiasphere, our guide to developments from the region. We’ll be monitoring the region to bring you fortnightly updates on political, legislative, economic, environmental and diplomatic events. Our aim is not to flood you with information, but provide clear analysis and outlook. On our radar are not just headline-grabbing news, but also stories ignored by corporate media both within and outside the region. The launch comes at a critical time of global pandemic, when many seek reliable information. So while this was initially planned as a members-only product, we’re making Southasiasphere free to all for now. Do check out our membership plans and help support our work, and let us know what you think!

This week in Southasia:
Labour in the time of COVID-19

The fight against COVID-19 will have several economic and human consequences, not least for millions of migrant workers across Southasia. Several West Asian countries that host migrant workers have announced travel bans in an attempt to stop the spread of coronavirus. The economic impact of travel bans could be debilitating for countries in Southasia: according to the World Bank, remittances are approximately 28.5 percent of GDP in Nepal, 7.9 percent in Sri Lanka, 6.7 percent in Pakistan, 5.7 percent in Bangladesh, and 4 percent in Afghanistan. (India only relies on remittances for 2.8 percent of its GDP, while for Bhutan and the Maldives remittances make up roughly 2.3 percent and 0.1 percent of GDP respectively).

While remittances are critical to Southasian economies, earning a significant fraction of the countries’ foreign exchange in some cases, migrant workers themselves are often among the most vulnerable groups during a crisis. Those in West Asia find cramped living conditions in the labour camps (confirmed cases in Qatar rose to 442 on 17 March due to a suspected outbreak among “expatriates in a residential complex”). 800 workers have also been placed in lockdown in a labour camp in Bahrain. Southasian migrant workers who cannot return to their home countries will remain vulnerable, with poor medical facilities and the possibility of non-payment of medical insurance.

How might the viral outbreak affect the hundreds of millions who rely on informal sectors for livelihood, which constitute 88 percent of total employment in Southasia?

While the World Health Organization and most governments have recommended self-quarantine and social distancing as measures to curb the spread of infection, these options are not available to every occupation. Lockdowns and economic slowdown resulting from combating coronavirus are likely to severely impact daily wage workers. Trade unions have begun to lobby Southasian governments for financial support or social welfare for workers in non-salaried professions. We’re keeping an eye on how domestic workers, municipal cleaners, auto drivers, delivery personnels – and others who keep our cities and economies running – might be impacted by coronavirus. Watch this space for more.

Prime Minister Narendra Modi’s video conference with leaders of SAARC on the coronavirus crisis earlier this week has focused attention on a regional body notorious for its inactivity. Apart from expected calls for cooperation in fighting the spread of coronavirus, the key takeaway from the conference was Modi’s suggestion for an emergency fund (to which India committed USD 10 million) to fight the outbreak. Other leaders, meanwhile, supplied updates on the status of the outbreak in their countries or offered ideas about tackling urgent public-health challenges.

While Prime Minister Modi suggested a meeting between nodal experts of the eight countries to take the conversation forward, news reports suggest that substantive cooperation is unlikely to happen soon. With all countries still coming to terms with the scale of the crisis, and immediate concerns like shortage of testing kits and intensive-care units taking precedence, measures that require unanimous support are expected to take a back-seat. Meanwhile, the conspicuous absence of Prime Minister Imran Khan – replaced by Pakistan’s state minister for health who raised the issue of Kashmir and called for an end to the ongoing shutdown imposed by India – confirmed how tenuous the regional apparatus will remain under fragile India-Pakistan relations. Arguably, the prospect of any activity around SAARC is a net positive. But that is perhaps too low a bar when time is of the essence.

Efforts to reduce the military’s political power in Myanmar have failed after a series of proposals for constitutional amendments couldn’t muster enough votes in the Parliament to pass the 75-percent threshold. One of the proposed amendments put forward by the ruling National League for Democracy (NLD) aimed to bring down the share of parliamentary seats reserved for the military from 25 percent at present to 5 percent by 2030. Another proposal sought change in the percentage of votes needed for constitutional amendment down to two-thirds of elected representatives, which would have reversed the military’s effective veto over amendments to the military-drafted charter. These reforms – which received 62 percent and 64 percent of votes respectively – have been central to NLD’s political platform.

Meanwhile, the military and their political ally Union Solidarity and Development Party (USDP) remain loath to give any leeway to State Counsellor Aung San Suu Kyi: a vote to remove the clause, which bars from presidency anyone whose immediate family members are foreign nationals, also didn’t have enough takers. The proposal to describe Myanmar as a ‘democracy’ rather than a ‘disciplined democracy’, as the present Constitution does, failed as well. Voting for other proposals – over 100 amendments were tabled earlier in January – will continue until 20 March.

Over four months after Gotabaya Rajapaksa’s victory in the presidential elections, Sri Lanka seemed set to return to the polls for parliamentary elections. Not one to waste time, Rajapaksa had dissolved Parliament on 2 March and called for elections. However, following the outbreak of the global pandemic, the country’s election commission has announced that the polls, scheduled for 25 April, will now be rescheduled. (As of 20 March, there are at least 66 confirmed cases of coronavirus in Sri Lanka.

Buoyed by a ‘friendly’ press and with the opposition UNP in disarray, the SLPP seeks to secure a two-thirds majority necessary to amend the Constitution and significantly expand presidential powers, a key electoral promise. The prospect of four years of Rajapaksa having complete legislative and executive control of the government is worrying for Sri Lanka, particularly for journalists and rights activists, who have reported increased intimidation and surveillance since the presidential election.

Sri Lanka’s state-run news publisher Lake House has closed offices and ceased the printing of its broadsheet dailies. In Nepal, English-language weekly Nepali Times will not be printed from next week till the situation returns to normal.

Shafiqul Islam Kajol, a photojournalist and an editor based in Dhaka, has gone missing since 10 March, a day after defamation charges were filed against him. He was among the 32 journalists sued under the draconian Digital Security Act by an MP who used to be a former aide to Prime Minister Sheikh Hasina.

Responding to the impending economic slowdown, central banks in Sri Lanka and Pakistan have cut down interest rates to support economic activity amid the coronavirus crisis. In India, the Reserve Bank has kept the interest rates unchanged but will inject INR 10,000 crore into the market to maintain financial stability. Bangladesh Bank has relaxed loan repayments, deciding not to downgrade loans even in the case of failure to repay.