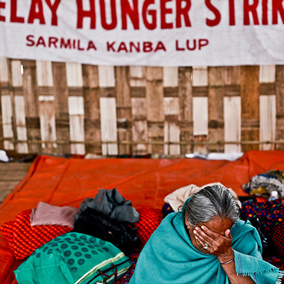 On 2 November 2014, Irom Chanu Sharmila’s fast in protest against the Armed Forces Special Powers Act (AFSPA) entered its 15th year. For much of this time, Sharmila has been held by the state for the crime of ‘attempted suicide’ under Section 309 of the Indian Penal Code (IPC). On 19 August 2014, she was acquitted of this charge by a local court in Imphal, though just two days later she was re-arrested on the same charges. On 23 January of this year she was once again released, only to be re-arrested the very next day. This cycle of release and re-arrest is as old as her fast.

The government’s 10 December announcement that it would repeal Sec. 309 of the IPC and hence de-criminalise ‘attempted suicide’ was welcomed by both local and international human-rights organisations. For Irom Sharmila, this development could have far-reaching implications. If the IPC is amended, Sharmila can no longer be arrested on these charges.

Except in the case of Sharmila, hunger strikes have not generally been ascribed the tag of criminality in India.

Within this wider context, the 24 January arrest of Irom Sharmila makes little sense if the government’s announcements are taken at face value. The arrest clearly suggests that despite the government’s stated desire to repeal Sec. 309, their willingness to use the statute remains. According to a report in the Indian Express, “after [Sharmila’s] health deteriorated at 9 pm [23 January] last night, the Manipur police, who had been guarding her around the clock, rushed her to the Jawaharlal Nehru Institute of Medical Sciences  in Porompat. ‘This is not an arrest, we are taking her for medical treatment,’ said SP Imphal West Ibomcha Singh. This afternoon [24 January], however, the police produced her before the magistrate and remanded her under section 309 of the IPC.”

The common perception in India is that Sharmila is being punished for protesting AFSPA (which the Indian state does not want repealed). Though this has merit in terms of the state’s broader intent, it has no legal basis. Technically, Sharmila is being punished for what the state deems is her attempt to commit suicide. This distinction is important.

The IPC does not define the term ‘suicide’. Given the ambiguity of the term, acts such as ending one’s life due to dissatisfaction from society, bankruptcy, poor agricultural produce etc. have been equated with prolonged hunger strikes. The state’s interpretation of suicide has been opportunistic, and has resulted in the arbitrary application of the law.

In C A Thomas Master v. Union of India, the Kerala High Court held that suicide is to be based on intention as an essential ingredient and is never to be presumed. This means that a person can be held guilty under Sec. 309 only if it is proved that the person had the intention to die. At no particular time in Sharmila’s 14-year hunger strike has she ever mentioned that she is – or was – ‘fasting unto death’, as alleged by the state. Media reporting on Sharmila’s fast has often repeated the state’s interpretation of her protest, without verifying its accuracy. In reality – as stated in Sharmila’s petition – the faintest idea of death has not occurred to her. In Sharmila’s own words, “The allegation of a ‘fast unto death’ has been created artificially.”

The element of mens rea (criminal intent) crucial to the interpretation of Sec. 309 is missing in Sharmila’s protest. The very fact that she has been taking nose-fed nourishment for 14 years is proof enough that she does not intend to die in the process of her protest. Furthermore, Sharmila’s medical report dated 19 May 2014, submitted to the Chief Judicial Magistrate, Imphal East, states that “no disease, bodily infirmity or any major mental illness could be detected on Sharmila, even after long fasting for 14 years.” Had she been intending to end her life, she would probably have done it long back.

In the apex court’s verdict on the Ramlila Maidan incident it held that “going on a hunger strike cannot be termed as unconstitutional or barred under any law. It is a form of protest which has been accepted, both historically and legally in our constitutional jurisprudence.”

In August 2014, the Court of the Session Judge Manipur East in Irom Chanu Sharmila v. State of Manipur acquitted Sharmila of the charges of one of the 15 First Information Reports (FIR) against her, stating that “there is no material to establish that Irom Chanu Sharmila has ever stated she is/was fasting unto death… Surviving solely on nose feeding without taking any food for 14 years negates the very feeble presumption of ‘intention of fasting unto death’, since the petitioner is not refusing nose feeding.”

Two days after her release, Sharmila was rearrested on the same charge.

Case history
To understand the arbitrary behaviour of the Indian state in dealing with Sharmila’s case, it is important to revisit legal opinion pertaining to the law. Sec. 309 reads: “Whoever attempts to commit suicide and does any act towards the commission of such offence shall be punished with simple imprisonment for a term which may extend to one year or fine, or with both.”

The constitutional validity of Sec. 309 was challenged in 1994 in the case of P. Rathinam v. Union of India in which a division bench of the Supreme Court argued that “the right to live of which Article 21 speaks of can be said to bring in its trail the right not to live a forced life, and therefore, Section 309 violates Article 21.” This was, however, overruled by a Constitution Bench of the Supreme Court in 1996 in the case of Gian Kaur v. State of Punjab. The Court held that Article 21 cannot be construed to include within it the ‘right to die’ as a fundamental right, and therefore it cannot be said that Sec. 309 is in violation of Article 21.

In 2011, however, the Supreme Court in Aruna Ramchandra Shanbaug v. Union of India opined that, “we are of the opinion that although Section 309… has been held to be constitutionally valid in Gian Kaur’s case, the time has come when it should be deleted by Parliament as it has become anachronistic… We therefore recommend to Parliament to consider the feasibility of deleting Section 309 from the Indian Penal Code.”

In a report titled Humanization and Decriminalization of Attempt to Suicide, the Law Commission of India recommended that, “In view of the views expressed by the World Health Organisation, the International Association for Suicide Prevention, France, decriminalization of attempted suicide by all countries in Europe and North America, the opinion of the Indian Psychiatric Society… the commission has resolved to recommend to the Government to initiate steps for repeal of the anachronistic law contained in section 309.”

It is worth noting that in a 1971 report, the Law Commission of India had also recommended the law’s repeal. Following this, the Indian Penal Code (Amendment) Bill of 1978 advocated the repeal of Sec. 309. The bill was passed by the Rajya Sabha on 23 November 1978, but since the Lok Sabha was dissolved soon after in 1979, the bill lapsed.

When asked for their opinion, 18 states and four Union Territories gave their consent to the Union Home Ministry to remove Sec. 309. The law is not applicable in Jammu & Kashmir, while Bihar, Madhya Pradesh, Delhi, Punjab and Sikkim are opposed to it. In August of this year the home minister informed the Parliament that the Government is considering the recommendation of the Law Commission to repeal Sec. 309. Though on 10 December the government claimed that Sec. 309 would be repealed, at present its legal status remains unchanged until and unless an Indian Penal Code Amendment Act in this regard is passed by the Parliament.

The above examples suggest that Sec. 309 was an undesirable law that should have been repealed long back. Not only was legal opinion in favour of it, but it also enjoyed the popular support of state governments. Only a handful of former British colonies, including Pakistan, Bangladesh, Singapore and India have persisted with the law. The only legal hindrance to repealing Sec. 309 of the IPC was the Supreme Court’s verdict in Gain Kaur v. State of Punjab which upheld its constitutionality. However, the Law Commission points out that, “The supreme court in the case of Gian Kaur focused on the constitutionality of Section 309. It did not go into the wisdom of retaining or continuing the same in the statute.” It needs to be understood here that what may be constitutionally valid need not necessarily be morally and ethically desirable. Multiple judgments in the past have stated that the section (though constitutional) is inhumane and arbitrary and its retention is unbecoming of a civilised society.

Unnecessary hassle
Since 2000, Sharmila has incurred 15 FIRs, with only one of them proceeding to trial. In all of these, Sharmila has been charged with ‘attempt to suicide’. For the last 14 years, she has been confined as an under trial prisoner for a period of one year (the maximum period prescribed as punishment). What explains the state’s behaviour? Except in the case of Sharmila, hunger strikes have not generally been ascribed the tag of criminality in India. Anna Hazare, in his activist career, has undertaken a plethora of indefinite fasts to pressurise the government to accept his demands. But the state has never imposed criminal sanctions over him. Why this differential treatment for Sharmila?

The repeal of AFSPA, clearly, is a sore point for the state.

It is ironic that in a country that claims to be the ‘world’s largest democracy’, Irom Sharmila has been held for much of the last 14 years under a provision of law which has been considered “anachronistic”, “arbitrary” and “inhuman” by the judiciary on multiple occasions.

Under the present circumstances, there are two possible ways to absolve Sharmila of criminal charges. First, Sharmila’s legal representatives can approach the High Court citing Sec. 218 and Sec. 220 of the Code of Criminal Procedure and request that the remaining 14 FIRs be heard collectively so that the matter can be solved quickly. Second, the Parliament could repeal Sec. 309. The government’s good intentions in this regard will only have meaning if the law is actually amended. But even if Sec. 309 is repealed, it will not absolve Sharmila of criminal charges in the 14 existing FIRs she faces, as Sec. 309 was effective at the time of the alleged crime. What it will ensure is that the state cannot book her for ‘attempt to suicide’ any longer. Both options are unlikely to encourage Sharmila to break her fast. The only thing that will is repealing AFSPA. But is the Indian state ready for this?

~ Mukesh Rawat is a New Delhi-based journalist and can be reached at mukeshrawat705@gmail.com. He tweets at @mukeshrawat705.