A SAMDEN-Himal initiative to track legal attacks on journalists and media groups in Southasia. 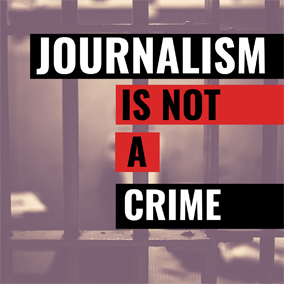 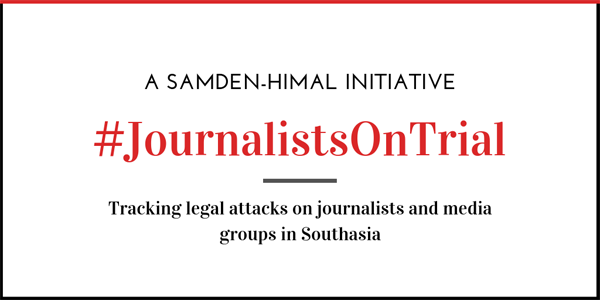 On the occasion of World Press Freedom Day on 3 May, South Asia Media Defenders Network (SAMDEN) and Himal Southasian present #JournalistsOnTrial – a collaborative effort to document legal attacks against journalists across the region, starting with Bangladesh, India, Nepal, Pakistan and Sri Lanka.

Violence and physical reprisals against journalists and media organisations working in Southasia are not new. Neither are the instances of intimidation by the state and imprisonment of journalists. However, what is increasingly becoming common, and yet not adequately reported and documented, are the legal and bureaucratic tools used to silence journalistic voices.

There is a growing pattern of governments and corporations in Southasia – and indeed, around the world – of abusing laws on cybersecurity, national defence and defamation to stifle journalistic work. Governments rely less on overt censorship, and instead pursue ‘legal’ routes – including false and malicious cases – to attack journalists and media groups, circumventing the usual protections afforded by press laws. Large corporations, meanwhile, have taken to bombarding journalists and media organisations with drawn-out, exhausting and expensive lawsuits to drain their already limited resources.

In some cases, such lawsuits are not directly related to journalistic work and it is extremely difficult to determine whether the case is a legally sound one, or an abuse of the law. However, a simple documentation of such cases can illustrate the pattern behind such attacks, which readers can draw their own conclusions from, for it is often the process and not the outcome of such legal attacks that is the killer.

The following database of cases against journalists, some of them ongoing, is by no means exhaustive. Documenting these cases was extremely difficult because of the limited reporting and the lack of information in the public domain. It is, however, a step in highlighting the many ways in which litigious harassment is being used to attack free and independent media and we invite you to build this list by adding cases or sending us further information on the cases we have listed so far. You can do that by emailing contact@samden.org.

In Bangladesh, litigious harassment as well as arrests of journalists are frequent. Until recently, these were carried out largely under Section 57 of the infamous Information and Communication Technology (ICT) Act. The best-known instance of such prosecution was the arrest and detention of photojournalist and educator Shahidul Alam, who was in jail for over 100 days after an interview criticising the government’s handling of protestors and Facebook posts on the issue. In October 2018, the country adopted a new law, called the Digital Security Act, whose overbroad provisions are expected to further narrow journalistic freedom in Bangladesh.

In India, journalists frequently face harassment through civil and criminal defamation lawsuits, often from corporate entities or politicians, in response to coverage of corruption scandals. Also called SLAPP suits (acronym for ‘Strategic Lawsuits Against Public Participation’), these are intended to put a stop on investigative journalism by burdening the journalists and publications with resource-draining lawsuits, often filed in multiple locations around the country. The state also had a wide array of laws in its arsenal. Journalists are targeted under the Unlawful Activities Prevention Act, the Information Technology Act and several provisions of the Indian Penal Code.

Journalists in Nepal face a high number of defamation suits under the Electronic Transactions Act, which has become a convenient tool to bypass press protections. As a result, many defamation cases against journalists are also filed using this act, often against the publication of critical articles online, or for reposting it on social media. More recently, the judiciary has also shown interest in pursuing contempt-of-court case against journalists investigating educational qualifications of the chief justice. The court also attempted to restrict the newspaper from doing further reporting on the issue. The new Criminal Code, which came into effect in August 2018, contain provisions that further restrict journalism.

*While the case initiated by the CIAA itself has been suspended, some investigations trigerred by their prosecution continue.

Journalists in Pakistan face harassment form a variety of different legal instruments. These come overwhelmingly from the state, often with accusations of treason, disturbing public peace and involvement in terrorism-related activities. Most of these cases are pursued under the Anti-Terrorism Act, Electronic Crimes Act and Pakistan Penal Code. As many of the charges are serious offences, some journalists have spent months in detention and at least one of them is still in prison.

Sri Lanka has had relatively few reported cases of legal harassment against journalists since the end of the 30-year-long armed conflict in 2009. Journalists in Sri Lanka are rarely subject to criminal defamation suits as those laws were repealed in 2002. The harassment of journalists, however, comes in the form of threats and detentions by various security forces and investigative departments. As these actions are taken without pressing any charges, it is difficult to accurately document the extent of legal harassments journalists and publications face.