Skip to content
Culture > Kacha Garhi to the Kensington Oval

Kacha Garhi to the Kensington Oval

Being forced to choose between supporting the Indian or Pakistani team is now a thing of the past for cricket-crazy Afghans. 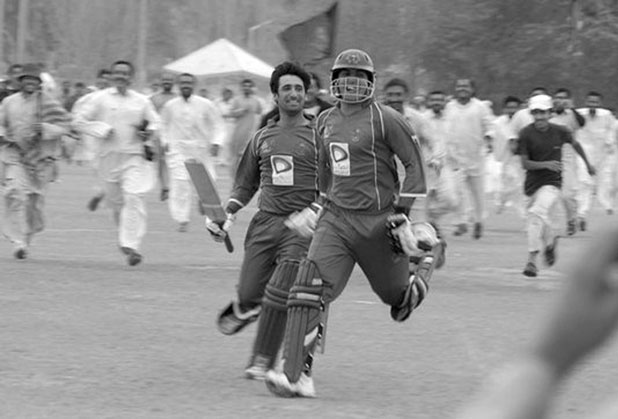 On 1 May 2010, at exactly 9.30 am Saint Lucia time, I signed off on my 15 year loyalty to the Indian cricket team. Ever since I was introduced to cricket as a child while visiting my grandparents in Peshawar, I had followed Team India with undying passion. Ironically, my fondness for the team began at a time when they were anything but a powerhouse in the world of cricket. At the time, Pakistan was at the peak of its glory, the great Wasim Akram leading them to victory after victory. Yet there was something indefinable about Team India that immediately spoke to my heart. It was such a powerful attraction that, for the next decade and a half, I remained a faithful supporter.

And what years they were! For almost half that period, I had no idea what the majority of the players on Team India looked like, because I followed the broadcasts on a weak All India Radio signal, magically available in Kabul. When India played the 1999 World Cup in England I listened to the games late into the night. Sleeping in the same room as three of my siblings, I would pull the quilt over my head and hold the radio close to my ear, enjoying every minute of the commentary that switched between Hindi and English. Until 2001, the only pictures of players I ever saw were those printed in Pakistani newspapers that came to Kabul in tomato crates.

I had no idea what the majority of the players on Team India looked like, because I followed the broadcasts on a weak All India Radio signal, magically available in Kabul.

During my early years as a fan, Team India lost match after match. When, in 2003, they came close to winning the World Cup, they meekly submitted to Australia in the final. The paradox of Team India was always that it was a team full of superstars, yet not a superstar team. From a hardcore fan’s point of view, this was incredibly frustrating. But despite the ups and downs (mostly the latter in those early years), I never gave up. In the recent past, of course, the picture has been different. The Indian team has emerged as a force in World Cricket, both on and off the field. Today it sits atop the International Cricket Council (ICC) Test rankings. But I no longer support them. In fact, all these years I supported India because the participation in international cricket of my home country, Afghanistan, remained only a dream. On 1st May, however, that dream became reality.

Over the past two years, the rise of Afghanistan as a serious cricketing country has been akin to a fairytale. Within that time, the team has bulldozed its way through four divisions of ICC tournaments, and announced its arrival at the gates of cricketing powers such as India and South Africa. Their qualification for the ICC Twenty20 World Cup, and their acquisition of ODI (one-day international) status has brought them alongside the top countries in World Cricket – and this from a country that for long had no domestic circuit, cricketing ground of an international standard, or even salaries for players. The average Afghan sees a game of cricket, played with a taped tennis ball on a dirt pitch, as Friday morning recreation. The standard form of the game played in other countries – with pads, helmets and coaching staff – remains a rarity in today’s Afghanistan. Indeed, considering this background, Afghan cricket has come so far on little more than talent, strength of will, and a bit of luck.

The journey officially began in 1995, when a group of Afghan refugees, having learned the game during their years in Pakistan, came together in Peshawar and founded the Afghan Cricket Federation. In their desire to represent Afghanistan they went as far as negotiating the legalisation of cricket with the Taliban, a regime that was highly unfriendly towards ‘modern’ sports. In 2001, just before US and NATO forces toppled the Taliban regime, the team announced its arrival on the international stage by touring Pakistan. While the Afghans played only provincial teams on that first tour, and lost most of the games, they received substantial media coverage due to the political environment in their home country. That same year, the Afghan Cricket Federation, led by coach Taj Malik, gained affiliate membership of the ICC. Since then, it has been a steady rise towards the top.

When Afghan Captain Nawroz Mangal walked out for the toss against India, it was the first time that I had found myself praying for India to lose.

Malik is now known, fittingly, as the father of Afghan cricket. As a refugee in the Peshawar-area refugee camp Kacha Garhi, Malik says that he “discovered and learned” cricket in the aftermath of the excitement of the 1987 World Cup. A man of vision and passion, he eventually brought together a motley group of young men, most also from Kacha Garhi, and convinced them to believe in their abilities – that the sport could be their ticket to travelling the world. Of course, the refugee camp was very far from the lavish grounds, corporate sponsorship and afternoon teas of international cricket. But by 2007, Malik’s dreaming had begun to see the light of reality.

After winning championships in the region and beyond, in 2008 the Afghan team began to take part in the ICC World Cricket League – albeit ranked at the very bottom of Division 5, the lowest division. Yet in a sporting journey of remarkable speed, since then the team has moved up through the fifth and then fourth divisions, winning 10 out of their 11 games. They left Division 3 behind with the same ease, eventually finishing at the top and progressing on to the World Cup qualifiers in 2009. By the time they arrived in South Africa for the recent World Cup qualifiers, they had been to India, Sri Lanka, England, the island of Jersey, Argentina and Tanzania – all in just two years.

The team’s efforts to get to the ODI World Cup 2011 ended emotionally, with the team narrowly missing qualification. But as consolation, Afghanistan qualified for the Twenty20 World Cup, the premier championship for the game’s new shorter form. In April, the team overcame a last-minute hurdle – the volcanic ash that was grounding thousands of flights – to arrive in the Caribbean for their first top-tier event. Even now, it is difficult to express the storm of emotions that overcame fans, including myself, on seeing the Afghan team arrive at the series. The task ahead, however, was enormously difficult: their opponents, India and South Africa, were ranked number two and three.

When Afghan Captain Nawroz Mangal walked out for the toss against India, it was the first time that I had found myself praying for India to lose. As the game began, and the members lined up for the national anthem, my friends and I were in tears, suddenly overwhelmed at the thought of having a national team able to compete at the sport’s most exalted levels, despite coming from a country ravaged by war. There was clear emotion in the eyes of the players as well. Noor Ali, the opener who went on to score a 50 in the first game, wore an Afghan-flag headband, his watery eyes gleaming. As an Afghan fan, it was easy to get carried away: the success of the team in the past year had been so rapid, their triumphs so convincing, that an upset against the major teams seemed almost probable.

In the event, the team put up a decent fight against India. The commentators raved about the maturity of the Afghan side’s skills, and the fact that the players were not overawed to be going up against individuals they had long admired as heroes – though some did say that they were hoping to get autographs after the game. The Indian captain, too, was full of praise for the way the Afghans played their game.

Following the appearance in the Caribbean, a new phase in the journey of Afghan cricket has clearly begun.

Against South Africa at the famed Kensington Oval, however, things fell apart – or so it seemed to us fans. Their previous success had made us believe that they were capable of anything, even facing the bolting pace of Dale Steyn, South Africa’s star player. After some moments of disappointment, however, we realised that we were being unfair to a team that had achieved so much in so short a time. Indeed, their mere presence at the World T20, regardless of the results, called for celebration. And despite the losses, the Afghan national team showed tremendous talent and potential, and the promise of further progress in the future.

Following the appearance in the Caribbean, a new phase in the journey of Afghan cricket has clearly begun. The world has caught a glimpse of the talent, passion and fight that have brought the team so far. Yet up to this point, the Afghan players have been able to draw upon their natural abilities and tremendous self-belief; from now on, that will not be sufficient. As became clear by the end of the tournament, they will need to constantly improve their skills in order to be able to compete with the best. But that can only happen if adequate cricketing infrastructure is built in Afghanistan, if stadiums and coaching academies are constructed, if a domestic circuit is invested in, with attention paid to the players and their needs. The ICC and the Afghan government have made some early efforts to meet these needs, and given some support to the national team. But tremendous work lies ahead if the country is to become a permanent part of the major leagues and compete against the world’s best – and continue to bring Afghan pride to stadiums around the world.

~ Mujib Mashal is a journalist from Afghanistan.