The Editors | Sep 11, 2008
Read Himals in-depth coverage of the Kosi crisis
JOIN THE DISCUSSION BELOW

Photos by Arpan Shrestha
Comments by Ramaswamy R Iyer
A River in Disequilibrium by Kanak Mani Dixit;
No lessons learnt by Dinesh Kumar Mishra;
Interview with Dipak Gyawali in The Kathmandu Post;
Photos by Edwin Koo
Kosi Balance Sheet
For a Morsel of Life!: A Dalit Watch Report on Flood Relief Camps in Bihar
On-the ground reportage by Prashant Jha and Priya Joshi; commentary by Dewan Rai; and before and after flow maps in the Nepali  Times;
and exclusive photos by Ajaya Dixit

Engineer and water resource analyst Ajaya Dixit, who has worked on embankment- and Kosi-related issues for long, travelled to the breach site at Kusaha on 1 September. His exclusive photographs, the latest to be available, are provided here.

The ‘eastern afflux bund’ of the Kosi, 10 km north of the Kosi Barrage, continued to collapse to the river’s flow as late as Monday, 1 September. 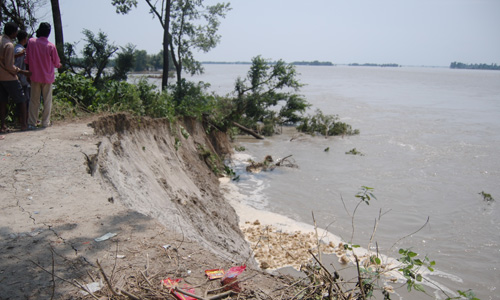 The patch of trees at the far end, left centre, is the continuation of the ‘eastern afflux bund’. The extent of the 2 km-wide gap in between the camera and that line of trees makes the Kosi Breach. The old flow of the Kosi goes down the right horizon, while the new stream constitutes the entire expanse to the left. 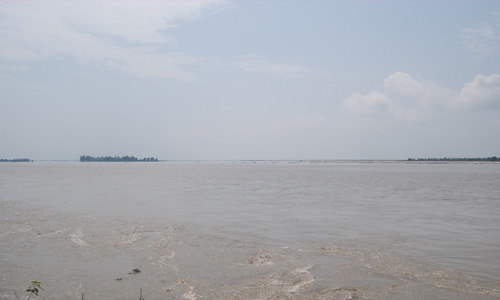 Ajaya Dixit at the site of the breach. Fishermen in the background report that their bamboo poles cannot touch bottom and estimate that the flow at the point of diversion must be more than 50 ft deep. 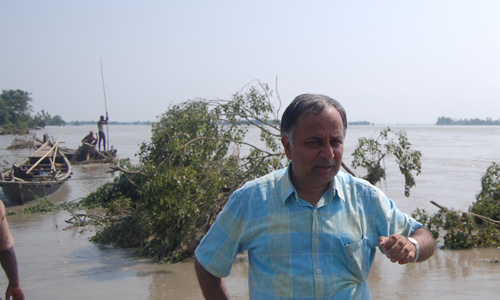 A mela has developed on top of the embankment which still stands, where locals from near and far come to view the site of the breach. While knowing of the destruction in Sunsari District in Nepal, many seem unaware of the massive devastation caused further downstream in seven districts of Bihar. 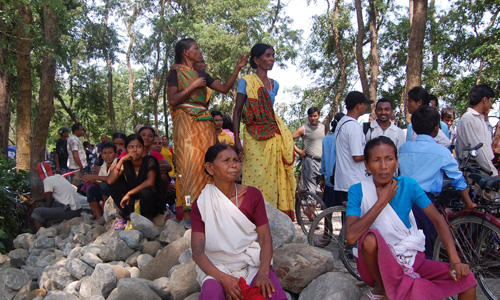 Send us your thoughts on the humanitarian crisis in the flood-affected areas of Bihar and Nepal as well as on strategies for the future below.