FICTION: A short story from Kashmir. 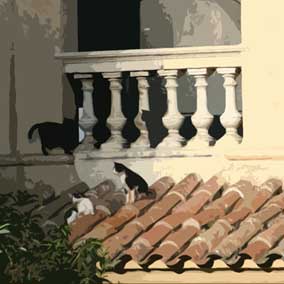 Through the multi-latticed chiffon window, the view is decrepit. Half open doors hinge on loose and rusty hooks. The windows have gathered soot and have faded in colour. Empty balconies nestle vagrant cats and wild pigeons. The garden at the front of the house, once full of life, looks parched. And in all this, a silence, broken occasionally by the jarring cry of a crow resting upon a splintered wall of this long forsaken house.

Saturday afternoon, August 1989. The air is heavy with moisture, and the weather is incredibly warm. Moti Lal, has returned from his office after a half-day leave. The house appears noiseless; the children are yet to return from school. Moti Lal marches around to find a place to sit, and finally rests himself on an old blue sofa, where Sunita and Reshmi often sit to do their homework. He sits down brusquely adjusting his fawn headgear, and places his files next to him. Waving one of the files against his face, he calls out to kanta.

Moti Lal is a head clerk at the Department of Public Works in Kashmir, a Pandit residing in one of the downtown areas of Srinagar, Habbakadal. His family shifted here a decade or two ago. Most of his ancestors still live in Baramulla, his hometown.

Unlike other days when he comes home early from work and sneaks into the kitchen to surprise Kanta, today he has planted himself in the room. Through transparent blue curtains, artificial flowers, and well decorated olive painted walls, just opposite to his sofa, a mirror catches Moti Lal’s attention. As he looks at his reflection, his eyes stop at the red tilak on his forehead. The tilak has smudged and streaked its ways through the irregular wrinkles of his face.

Is this out of fear, or the heat? He thinks to himself. As Kanta appears, he snaps out of his reverie.

Kanta, a forty-year-old, has a bright copper toned face, a long nose and beautiful deep brown eyes. Despite being the mother of two children, Kanta looks young. Today she has donned a deep crimson sari, laced with multiple floral designs; a heavy gold chain to compliment her long neck and an oval green bindi, which draws attention to her broad forehead. As she passes water to Moti Lal, Kanta inquires about his coming home early.

Moti Lal is unsure whether what he has heard at the office is true. He tells Kanta about the dispute at the office where he had overheard somebody saying that militants were planning to attack the Pandits if they didn’t leave Kashmir soon.

Sunita and Reshmi studied at the government school a kilometre away from their house. The school day ended at four.

Once they returned, it was their habit to play in the garden. Sunita followed Reshmi, holding her bag. The bag contained all their play things: clay kitchen sets, three sari-clad dolls, some artificial jewellery. It was a treasure box for them and their friends.

After school, Lily, their Muslim friend, often came to their house along with her kitchen set, and if the weather was pleasant, the three friends went out to play their favourite game, saze long. Moti Lal would watch them from his corner in the garden where he sat and read. Their laughter brought much needed relief to his worried mind.

In the breezy evenings, Moti Lal would sometimes invite Ghulam Muhammad for tea and snacks. Their meetings were full of intellectual discussions about things they loved, about Kashmir, current affairs, their favourite novelists and poets.

Ghulam Muhammad lived next to Moti Lal. Despite having busy work schedules, they had a long and enduring friendship. Both ensured they took some time out, at least two days a week, when they would meet in the evenings.

On these days, Kanta would spend her evenings cooking and humming the songs of her favourite singer Zooni Begum. Whenever her chores spared her a few moments, she would sit by the window, knitting and occasionally looking over at where Moti Lal and Muhammad sat talking.

Their meetings often went late into the night, usually overtaken by discussions about the political tension in Kashmir. Ghulam Muhammad was always more optimistic. He would take Moti Lal’s leave, always confident that bhaichaara – brotherhood – would prevail.

Until 18 November 1989, Moti Lal and his family defied every apprehension and lived undaunted. Then one day Moti Lal was informed that his cousin brother Chandrekaanth was killed and that his other cousin, Nirmal, had fled Kashmir with his mother and his only daughter, Nikita. The news immediately made Moti Lal fearful, and agonising thoughts about Kanta and his daughters started to cloud his mind.

In the following days, the situation started to get aggravated. There was news that Pandits were being targeted in the riots. In the evenings, there were various slogans on loudspeakers. The masjids were abuzz with calls for azadi, interspersed with anti-India and anti-kaafir songs.

In this chaos, Moti Lal decided to leave Kashmir. He knew it would be difficult to convince Kanta, who insisted she was a Kashmiri first and only then a Pandit. Every time Moti Lal seriously thought of leaving, it was Muhammad’s assurances that would change his mind. Not wanting to upset or part with his lifelong friend and the neighbourhood in which he lived, he stilled his fears and tried to relegate concerns about his family’s security to the back of his mind.

In the following months, Moti Lal was busy and occupied. The festival of Herat was arriving in another month. Kanta had started to prepare for the feasts. The walnuts, which Kanta had stored for 40 days were packed in three beautiful clay pots.

Through the celebration, although Kanta felt wary, she was also exuberant. She was aware of the situation, and because of the intensifying turn of events, she had grown extra sensitive, keeping her anxious and alert all the time. She regularly kept a check to see if the main door was locked, or if her children had not strayed from the garden.

As the day of Herat arrived, Kanta went over to Ghulam Muhammad’s house and gave Zooni, Ghulam Muhammad’s wife, a plate filled with sugar and tea. This was a Shaivite ritual where neighbours presented each other with gifts. Taking a long pause from the household, as Kanta and Zooni met, they sat chatting about everything: children, household, women in their immediate neighbourhood, riots, each other.

As days went by, Moti Lal continued his usual office work. Kanta returned to her household chores. Once again, nights were peaceful and the days calm. One night, when the moon sprinkled its burrowed light everywhere, Moti Lal woke up in terror.

It was around 2 am and there was an unusual hubbub in the neighbourhood. Disoriented but trying to get his senses in order, he leapt up and took support against a wall. He could hear people rushing out of their homes, screaming. Moti Lal thought to himself that it was perhaps the last night of his life. All he could feel was his quickening pulse and the chill of the wall against his chest. It was like life was leaking out of him in instalments. Boom! Someone pulled down the shutter of a shop, giving Moti Lal a near heart attack.

Moti Lal was sweating. Kanta too had woken up, looking pale and stiff. She had crammed herself under the blanket, hugging her children protectively. Moti Lal, having gathered courage, walked himself to the window. As he drew closer to the window, he heard a familiar voice.

As he peeped through one of the crevices, hiding half his body behind the opaque curtains, he saw Shafiq, Ghulam Muhammad’s son. He was shouting “ Eid ka chaand! Eid ka chaand!” The crescent had been sighted, confirming Eid-ul-Fitr in Kashmir for the next day. As Moti Lal heard this, he shouted out to Ghulam Muhammad, with his breath still irregular, “Muhamamda, ye cha maara Eid? Eid? Mye ha wonh Mujahid ma czzai; Muhamamd, is it Eid? Eid? I thought the militants had broken in.”

That night, even with his familiar jokes, Ghulam Muhammad could not put Moti Lal at ease. Eventually, when Moti Lal’s fear subsided, Ghulam Muhammad could detect an unusual change in his behaviour. A worry seemed to have set in, deeper and stronger than ever. His forlorn face left Muhammad with a heavy heart. In those silent hours of darkness, both friends sat together without uttering a word.

That night, as Ghulam Muhammad started to leave, he paused at half distance, turning back to look at Moti Lal. He knew that Moti Lal would leave Srinagar. They exchanged a look, and both knew that, this time, Ghulam Muhammad, despite wanting to, would not urge him to stay.

Next day, as the darkness engulfed the frail light, and in the surrounding quietness, Moti Lal, hugged his lifelong friend goodbye. In the deep silence, he left his home, in the refuge of Ghulam Muhammad.

After twenty five years, Ghulam Muhammad stands at the window of his room, and thinks of the moments lost. As he heaves a sigh, he thinks of his dear friend, Moti Lal.

Kanta is dead. Sunita and Reshmi are married. Moti Lal has partial paralysis and is hardly able to walk now. The last time Moti Lal spoke to Ghulam Muhammad on the phone, they had a long discussion on whether Kashmiri Pandits would return. He ended the conversation saying, “Someday, I will return home, back to the place where my Kanta lived.”

~Muntaha Hafizi is an independent journalist based in India-administered Kashmir. She reports on conflict and women’s issues.