Skip to content
Commentary > Letter from Karachi: For a place in the shade

Letter from Karachi: For a place in the shade

Shade is increasingly becoming a luxury in Karachi's public spaces. 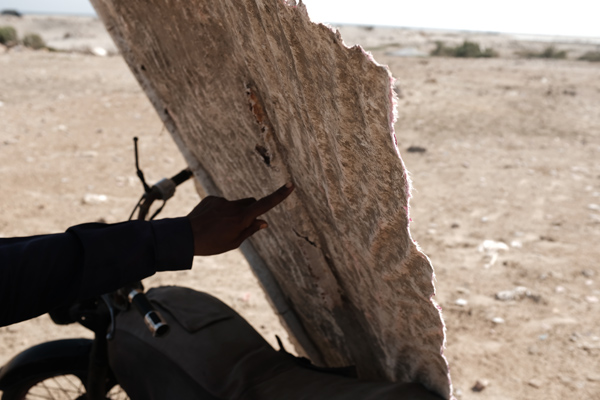 A man explains how umbrellas in a public park were made from poor materials and, therefore, broke just months after construction. All photos by Kevin Shi.

In Karachi, Pakistan’s largest city, the sun is an ever-present force, sometimes making it hard to even be outside. Every summer, the city suffers from heat waves causing dozens if not hundreds of deaths each year. Residents and medical personnel recall shocking scenes during the heat wave of 2015, when temperatures rose beyond 45ºC and over 1300 people died as a result. The city’s biggest morgue had to turn away bodies and cemeteries ran out of space to bury the dead.

Karachi’s climate is undeniably harsh, but the impact of the heat has been exacerbated by the lack of shade in the city’s public spaces. While walking outside, it is difficult to find a path that does not expose one to the blistering sun. The impact of the lack of shade is felt primarily by the already vulnerable populations, such as the city’s working class and the homeless. Construction workers, hawkers, street food vendors, garbage collectors and the kabari, (recyclable collectors), have to work outdoors, often unprotected from the sun, regardless of the temperature.

In a city where so many work outdoor jobs and depend on daily wages, shade should be a priority for urban planning. Yet, it is almost completely neglected. Perhaps this is because unlike floods and earthquakes, which compel government action and donation drives, a constant oppressive heat is not a highly-visible catastrophe and does not obviously disrupt economic growth. Unlike terrorist attacks, heat waves do not hurt Pakistan’s image. After each major terrorist attack, walls are raised, barbed wire is put in place, and military operations begin. However, when over 1300 people perished in a weeklong heat wave in Karachi, despite a lot of talk on the need to combat climate change and increase the green cover in the city, no meaningful steps were taken. Instead of long-term planning to ameliorate the effects of heat, officials merely warned residents to stay indoors and asked hospitals to prepare extra beds.

However, staying ‘inside’ is not a choice that is available to all. For those who live in air-conditioned homes, travel by air-conditioned vehicles, and work office jobs, this recommendation is useful. However, for a much larger portion of the population, the ‘inside’, whether it is of a home or a vehicle, is not easily accessible.

Shade in public spaces is a policy imperative because exposure to heat and sun is a public-health crisis. Planning and development in Karachi has not only failed to produce more shade protection, it has actively destroyed it. According to a 2017 survey conducted by the National Forum for Environment and Health, 47,000 trees were uprooted between 2012 and 2017 for development projects throughout the city, such as the widening of roads and the building of the Green Line of the Karachi bus rapid-transport network, a project that is now on its seventh deadline extension.

These projects, which largely cater to car owners, actually worsen Karachi’s heat problem. On a hot day, the sun can heat an exposed dry surface, like a concrete building or a road, to temperatures much higher than the surrounding air. A study by the Motorway Police of Karachi showed that the road surface was about 7 – 8º C hotter than surrounding areas. Shaded streets are rare, as roads have been widened again and again at the cost of roadside trees. The sea breeze, a source of relief for anyone working outdoors on a hot day, is being progressively blocked with the construction of high-rise buildings near the coast.

The government recognises that shaded green spaces are vital for keeping the city cool and has tried to construct numerous parks around Karachi. However, these parks don’t solve the lack of public shade and many are badly maintained. In March 2019, after a long closure, Bin Qasim Park was opened once again to the public. Inexplicably, the park has practically no shade besides a few scattered gazebos. The park is also closed between 11 am and 4 pm, a time when workers might be expected to take a mid-day break. The park prohibits entry to males not accompanied by females. This bars entry to the vast majority of outdoor workers as well as migrant workers, who are usually male and come to Karachi without their families seeking better opportunities and higher salaries to send to their families back home.

Across the street from Bin Qasim Park is Beach Park, which is open during the hottest time of the day and allows entry without female company. However, entry costs PKR 20, plus an additional PKR 30 rupees if you need to park your bicycle or motorcycle. For daily wage workers, many of whom earn PKR 200 – 300 rupees a day, this entrance fee is prohibitive. This park, too, does not have much shade besides a small handful of gazebos. The desperation for a sliver of shade is visible. Under one light pole, which casts a shadow wide enough for someone to rest under in the late afternoon, people have now placed a bench.

Outside of Beach Park, there is another stretch of land alongside the beach where dozens of benches rest like graves in various states of disrepair, under what used to be large umbrellas. Due to the wind coming off the sea, many of these umbrellas, which were constructed with what appears to be reinforced cardboard, have fallen off their stands, while others have been contorted into shapes that provide little shade. Only a few serve their original purpose. What looks like the remnants of an admirable park from the past, is actually what’s left of a project that locals say was completed just months ago.

Unique among these spaces is Frere Hall, a British colonial-era building that is one of the city’s most recognisable landmarks. Around the building is a large park that people of all backgrounds use for photoshoots, protests, cricket, discussion groups, cycling and a weekly book bazaar. Under the shade of the park’s large and numerous trees, people meet friends, spend time with family, and rest. There are no walls and no entrance fees or rules. It is one of Karachi’s most notable cross-class spaces. But this dynamic and inclusive park is at risk of being changed under the guise of restoration. A board of the city’s elite architects and cultural activists has been tasked with revamping Frere Hall and its surrounding gardens, and they propose adding a souvenir shop, parking over and underground, and, of course, a boundary wall.

Thus, in Karachi, the urban working-class population creates its own shade. At the beachfront park, a man pulled two benches together to make a bed, then tore a chunk off one of the fallen umbrellas to prop against his motorcycle to block the afternoon sun. He had the day off from his job as a security guard and wanted to get some sleep before his night shift at his second job. He is unable to enter Bin Qasim Park because he is without female company, unable to afford the entrance fee for Beach Park because his entire salary goes to support his family in Punjab, and unable to sleep in the shade of a building as he could be forced off the premises. Like many, he comes to this area to rest under any shade he can find or create.

Public shade and the spaces that provide it are shrinking and being replaced by roads, buildings, and other infrastructure. Each summer, the heat wave brings a crisis. For some, it is a death sentence. With each new infrastructure project and with each uprooted tree, shade is increasingly becoming a luxury good.

Kevin Shi is a freelance writer and researcher based in Karachi.