An Indian street magician in Yangon. 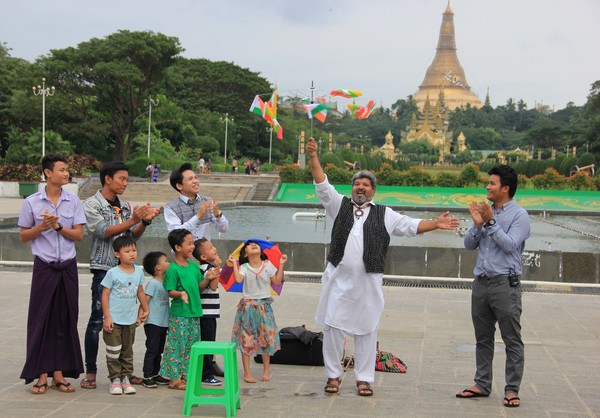 When I asked Ishamudin, a street magician from Delhi, whether he would be willing to come to Yangon for the shooting of a series of episodes for a TV program on Indian street magic intended to promote friendly ties between India and Myanmar, he flatly refused.

Ishamudin had seen enough videos of the brutalities being perpetuated on the Rohingyas – which are circulating on social media – to convince him that Myanmar was not safe for Muslims. I said I would be there to ensure he would not be harmed and he finally agreed.

The programme I was going to produce would be the first to come out of an agreement signed between Indian public broadcaster Prasar Bharati and Myanmar private broadcaster Mizzima TV in August 2018. Mizzima TV is part of the Mizzima Group which was founded in 1998 by three Burmese journalists in exile in New Delhi, including current CEO Soe Myint. Since Myint’s return to Myanmar in 2012, the Mizzima Group has flourished and claims to reach 20 million people through content on a range of platforms, including programmes on the state-run Myanmar Radio and TV (MRTV).

Our experience of the production reflected the complexity of the political situation in Myanmar.

In Yangon, Ishamudin was confident about gathering a crowd around him. He called out to a group of young bhikkhunis sporting pink robes and shaven heads.

The smiles on their faces disappeared. They gathered together in a knot and stood still with fear writ on their faces. Our crew rushed to assure them that there was no danger at all and that they were being invited to watch the shooting of a magic show. Their teacher herded them towards the waiting magician, and his kindly face seemed to put them at ease.

The magician called out to children to come and help him with a magic trick involving an umbrella and Indian and Myanmarese flags. Several young boys rushed up, but one began to cry. The trick culminated in the umbrella being “magically” covered by the flags of both countries and standing in the People’s Park, in view of the Shwedagon Pagoda, Ishamudin held up the umbrella of friendship against the sky.

However, as the Mizzima crew packed up their things, Ishamudin appeared disturbed. He said he had never in his life seen children look frightened or cry at his shows. I tried to explain that this was the result of decades of military rule, the effects of which had not quite ended.

Most of the filming for the programme was done in a studio. On the first day, we had to organise the seating arrangements. Ishamudin preferred to sit on the floor, as is the tradition for many Indian street magicians. The Mizzima TV anchor was asked to sit on a chair, to facilitate the shoot, but the Mizzima cameraman objected to this arrangement saying it was not considered good manners for a senior person to sit on the ground and for a younger person (especially a woman) to be sitting on a higher place. I said that in India, we, too, respect our elders but it would be disrespectful to make a young woman sit on the ground. Respect for women is as important a value as respect for elders. We found a middle-ground by having the anchor address Ishamudin as ulay or uncle.

I was careful while writing the script to emphasise the common elements of our cultures, ensuring there was no element of the patronising tone that many Indians adopt while talking to or about our neighbouring countries.  One skit involving a blank book which magically reveals the letters of the Hindi alphabet, also produced the Burmese script when the Mizzima crew asked Ishamudin for it, providing the perfect opening for the anchor to point out that both the Burmese and Hindi languages have the same alphabet – Kaa, Khaa Gaa – even though we pronounce it differently and our languages are distinct. When Ishamudin produced samosas from his magic box, we said that while samosas came from India, in Myanmar it took another form and had a different stuffing; besides samosas came to India from central Asia… so there was no pure Burmese culture or pure Indian culture.

Mizzima CEO Soe Myint confessed that he had been worried about the reaction of the Mizzima TV team to Ishamudin, a Muslim, even though he was not a Rohingya.

In Myanmar the use of word Rohingya is restricted because it means inhabitants of Rohang, an early name for Arakan. The official stand is that this community is from Bangladesh and therefore must be called Bengali. Earlier this year, both BBC and Radio Free Asia which provided programmes aired on MRTV, quit their partnership after the Information Ministry said that they could no longer air content from the channels if they continued to use the word “Rohingya,” which is “strictly prohibited.”

Two young journalists working for Reuters, Soe Oo and Wa Lone have been jailed under the Official Secrets Act for investigating the killing of 10 Rohingya men. Leading the hate campaign against the Rohingyas are the ultra-nationalist Buddhist monks working with the 969 Movement led by Ashin Wirathu, who was sentenced to 25 years of jail in 2001 for spreading hate but was subsequently released in 2012.  Many monasteries are coming under the influence of this ideology.

That is why I was surprised when Soe said we could have a magic show at an orphanage run by a Buddhist monastery nearby. We arrived at the monastery where we were ushered into a large hall filled with more than 200 children, all under the age of 10. As Ishamudin began his magic show, the kids watched fascinated, their faces lit up with joy.

One of the shows was to be at Zeyawaddy, some 200km north of Yangon. This was the place where Netaji Subhas Chandra Bose and his Indian National Army had taken shelter during their struggle against British colonialism.

Many farmers, mostly from Bihar and Uttar Pradesh, were brought over to Zeyawaddy by the British in the 1800s to cultivate sugar cane and paddy in cleared forest lands. This Indian-Burmese community were made stateless during the military dictatorship and it was the Rashtriya Swayamsevak Sangh (RSS) which supported the community throughout those years. The RSS in Myanmar works under the name of Sanatan Dharma Swayamsevak Sangh (SDSS).

The presence of the SDSS is why I told Soe that it would not be a good idea to organise a show by Ishamudin in Zeyawaddy. But Soe was confident that his contacts would make the arrangements; why would they not allow the children to see an Indian street magic show?

Soe was shocked when he was told by his contacts in Zeyawaddy that the show had been cancelled because the organisers did not wish to host a Muslim.

In the evening when I sat with some Burmese journalists at Soe’s home I asked what they thought of the decision by Amnesty International to strip Daw Aung San Suu Kyi of their highest honour, the Ambassador of Conscience Award, and the campaign against her for not using her moral authority to stop, the genocide of the Rohingyas.

I said that while I was not comfortable with Aung San Suu Kyi’s silence, I understood her position. But I did not understand why the West, while condemning her, did not condemn our Prime Minister’s silence over growing atrocities against Muslims in India.

One of the journalists very close to the National League for Democracy (NLD) said the party could have solved the problem if they did not have to face the pressure and campaign by Western countries. The West had only succeeded in making her position even more precarious, he said. After all, Myanmar was still under military rule.

Another journalist said that it was a fact that Burmese were chauvinists, being both anti-Muslim and racist. The Rohingya were persecuted not only because of their religion but also their race.

All of them agreed that, if Daw Suu Kyi was not there, there was every chance that the military could once again take over.

I said that when I had last come to Yangon, I had noticed some anti-Indian sentiment, but this time had not been such a negative experience. I said that while I was glad Mizzima had signed an agreement with Prasar Bharati, I did not like the idea of Hindu and Buddhist ultra-nationalists forming an alliance. In India, Hindutva groups have been trying to appropriate Dalit leader B R Ambedkar, and have attempted to forge links with ultra-nationalist extremist Buddhist groups in Sri Lanka and Myanmar.

Ishamudin says that he has heard Burmese muslims express concerns over these alliances when he goes to the mosque to offer namaz every day before coming to Mizzima studio.

I asked Ishamudin what his experience of Myanmar had been. He said he was surprised that he had been able to go to the mosque every day and that he had found Indian members of Jamaat-e-Islami. He had also been surprised to see hundreds of Muslims congregate at the memorial of Bahadur Shah Zafar to offer prayers. He also said that he could not believe that all the men, rich and poor alike wore lungis, and that the biryani in Myanmar was so good!

For the last episode of our magic show we arranged for Ishamudin to visit the Burmese magician Ko Khaing Myat, who welcomed him warmly. Khaing Myat said magic had originally come from India but now they had incorporated many tricks from China and the West.

Ishamudin wanted to know if it was very difficult to get permission to perform in public places, because in India access to public places had become next to impossible for street performers. The Burmese magician said in his country they needed permission from eight separate departments before they could perform in public. The two magicians showed each other their magic. Ko Khaing then took out a large python from a colourful box and the two magicians strung it across their necks and had themselves photographed. Ishamudin said they were not allowed to keep animals and that was why so many animal trainers had lost their means of livelihood.

Nandita Haksar is a human-rights lawyer and writer. She has represented workers, women, adivasis, Burmese activists, and the people of the Indian Northeast and Kashmir.