A report looks at the state of India’s workers amid the employment crisis. 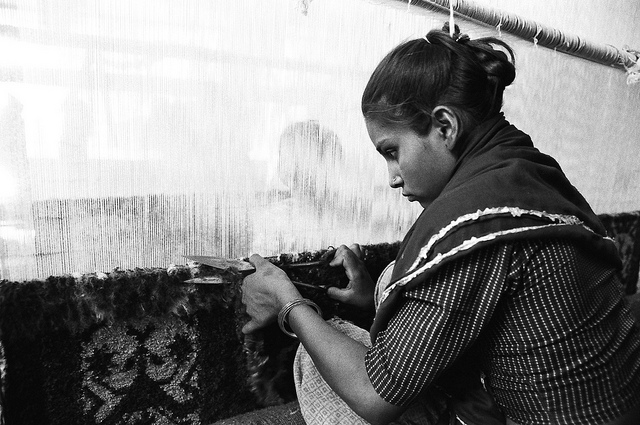 In the run up to the 2019 Indian general elections, one of the hotly debated topics is the question of jobs and high unemployment, a factor that could impact the polls. A report by the Centre for Sustainable Employment at the Bengaluru-based Azim Premji University sheds much needed empirical light on these debates. Published in September 2018, ‘State of Working India 2018’ documents employment patterns over the last few decades and the ongoing structural transformation of India’s economy, from agriculture and informal activities to manufacturing.  The report uses data on gender, caste and region to ask the question: “how has India fared?” In the following excerpt from the report, the authors unpack this by looking at how development processes often seen in industrialising societies are unfolding in 21st-century India. The accompanying infographics provide a visualisation of the state of India’s workforce.

In 1947, the newly independent India inherited an economy ravaged by decades of British colonial rule. Seventy years on, there is much success to show. The first forty years of independent India saw the foundations laid for a modern economy and solving the employment question was central to these efforts. Since the 2000s, India’s growth has accelerated. However, many difficult tasks still lie ahead, principally that of achieving structural change.

In an economy with a large agricultural as well as a large informal sector, structural change has two aspects to it. The first is the movement of the workforce away from agriculture towards manufacturing and services. Since this stylised fact of the development process is often associated with the economist Simon Kuznets, we refer to it as the Kuznets Process. Owing to factors such as lack of formal education as well as other barriers to entry in the formal sector, the movement is most often into informal manufacturing or services.

A developing economy is thus a dual economy. It has a sector consisting of relatively larger firms that hire labour in accordance with considerations of profitability and growth. In India, this is known as the ‘organised sector.’ But the economy also has a second sector where the amount of available work is distributed among workers willing to work. In other words, labour demand adjusts to labour supply and the market always ‘clears’. In this sector, there is no unemployment, only underemployment. This is the ‘unorganised sector.’

The two processes of structural change are closely related to each other. But as we elaborate below, it is useful to separate them analytically. In the standard model of structural change from the mid-twentieth century growth needs to occur in those sectors that can create more jobs per unit increase in output (that is, sectors that have a high employment elasticity) with skill requirements that match the skill profile of the workforce. These are usually labour intensive manufacturing industries.

But with the exception of a few economies, the Lewis-Kuznets Process has not unfolded in the expected manner. The ‘benchmarks’ for the process are the East Asian ‘late’ industrialisers such as Japan, followed by Korea and Taiwan, and finally China, who managed to create mass employment through increasing manufacturing activities. This required a judicious mix of industrial and trade policies that tied import substitution to export-promotion, and protection from foreign competition alongside fostering of domestic competition. It also required a favourable international climate in the form of export markets and geo-political stability.

This path is more difficult today. Not only do firms in these countries have to compete with a much larger number of more productive competitors, but also their governments have, or think they have, fewer options with respect to trade and industrial policies. Added to this is a turn towards protectionism in the industrialised countries that further limits export prospects. As a result, in many developing countries across Asia and Africa, the manufacturing share of employment is declining instead of growing. Instead of industrialisation, we observe ‘premature deindustrialisation’. That is, manufacturing reaches its peak share in output and employment at much lower levels of national income when compared to economies that underwent the transition earlier. 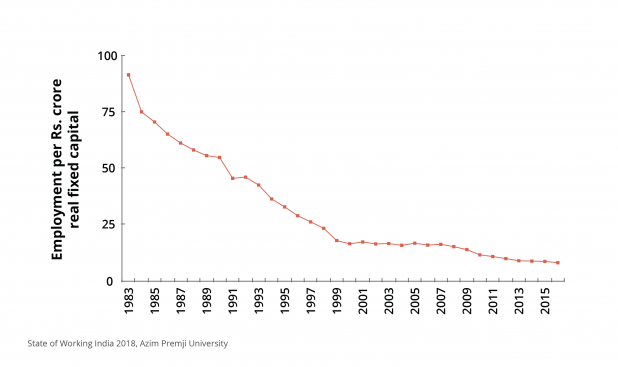 In India too, structural change has been slower than desired. The transition from an agrarian and subsistence-oriented informal economy of self-employed micro-entrepreneurs to a growth-oriented industrial and service economy consisting of large firms and regulated employment has been delayed.

But even this does not adequately capture the challenge. Two new dimensions need to be added to the conventional understanding of structural change. The first is the question of social equity: for whom are the new jobs and new opportunities created? The second is the question of ecology: does the transition improve our chances of surviving on the planet or make them worse? In India, in the twenty first century, Lewis and Kuznets have to meet Ambedkar and Gandhi.

The Kuznets Process at work

A key aspect of diversifying the economy, raising incomes and making them less volatile, is the creation of non-farm employment. This process is under way, albeit more slowly than was expected or may be desired. The result is that just under half of the workforce is still in agriculture, forced to share less than 20 percent of the national income. Further, the failure to create adequate, decent employment in manufacturing and services for those leaving agriculture has meant an explosion of employment in the construction sector.

There is a need for employment policy to balance two objectives: rapid generation of decent non-farm employment and improvement of farm incomes. These need not be opposed to each other. Rather, they can act in concert. Rapid improvement in farm incomes will not only have immediate welfare implications for half the workforce, but it will improve working conditions in the rest of the economy as well.

Contradictions in the Lewis Process

Economist Ajit K. Ghose estimates that around 100 million workers are either employed in very poor-quality jobs or are out of the labour force because of unavailability of work. These are ‘surplus workers’ available to be pulled into the economy if jobs can be created. Another estimate of the surplus workforce that can be more productively employed elsewhere is the percentage of those employed in unorganised petty services such as retail, domestic work, and so on. As of 2016, this is estimated to be 78 million.

While the organised manufacturing sector has increased its share of employment at the expense of the unorganised sector, this has taken place via an informalisation of its workforce complicating the Lewis Process. Indeed, the understanding that structural change would mean larger enterprises, and larger enterprises would mean more formal and regulated employment has been challenged on both fronts: first, because of a dispersal of production from larger to smaller units, and second, because of the creation of an informal workforce subject to fewer regulations, within the organised sector. As a result, the share of formal employment has been increasing very slowly and the majority of the wage workforce is still informal. In addition, own-account workers constitute nearly half the total workforce. Thus, over 80 percent of the Indian workforce remains informal.

The maturing of democracy in India both in the parliamentary and the social movement space over the past few decades has imposed welcome constraints on the traditional understanding of the Lewis-Kuznets Process. The traditional model is in some ways a model with ‘empty places.’ It does not specify who occupies which position in the new economy. But it is no longer possible to speak about structural change without asking if the process creates opportunities for marginalised, excluded, or oppressed sections of society.

This is a result of strong grassroots movements that have pushed equity considerations into the centre of the development process. While progress has been made in the form of lowering educational and earnings gaps, these remain high and significant occupational and industrial segregation also persists. Two examples will illustrate: one, the vast majority of workers who are outside the labour force but are willing to work are women, and two, the scheduled castes are vastly over-represented in the leather industry.

People’s movements have also arisen all over India (and the world) questioning models of development that do not take ecological constraints seriously. Resistance to displacement and dispossession as well as contestation over the use of land, forest, water, mineral, and other resources is now the norm. These movements have also brought the Eurocentric epistemic foundations of conventional development thinking into question. As with equity, a welcome trend is that we can no longer treat these issues as an add-on to the ‘core’ development process. This has the potential to overturn our notions of ‘industry’, ‘efficiency,’ and ‘development’.

The Centre for Sustainable Employment (CSE), at the Azim Premji University, conducts and supports research in areas of work, labour, and employment.