Skip to content
Commentary > Living in the global glasshouse

Living in the global glasshouse 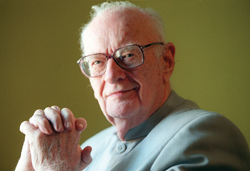 I write this on your 93rd birth anniversary. Just over a thousand days have passed since you departed. Like all true rationalists, you didn’t believe in an afterlife. So I don’t expect you to be somewhere there, ‘keeping an eye on us’. Yet, as the first decade of the 21st century draws to a close, I find it helpful to address this to you, and to reflect on some of your timeless ideas.

Three years ago this month, I worked with you in drafting and filming your 90th birthday reflections on YouTube. In just nine minutes, you outlined your vision and aspirations for the key areas that dominated your prolific life: space travel, communication technologies, and writing. We had no idea at the time that you had only 100 days left to live, or that this short video would soon become your public farewell. Those 900 words are well worth another read, and these few are particularly timely: ‘Communication technologies are necessary, but not sufficient, for us humans to get along with each other … Technology tools help us to gather and disseminate information, but we also need qualities like tolerance and compassion to achieve greater understanding between peoples and nations.’

Of course, you’d been saying this for several decades. Few individuals played a greater role than you in shaping today’s information society. You not only proposed the communications satellites (comsats) and inspired the world wide web, but also mentored technical professionals, advised the United Nations agencies, and gradually prepared humanity to live in an always-connected, transparent world.

The International Telecommunications Union (ITU) says the total number of mobile phone subscriptions worldwide will exceed five billion during 2010. There now are two billion Internet users in the world, more than half of them in the developing world. With so many people getting connected to global telecom networks during the past decade, we are only just beginning to tackle the many legal, social and cultural implications. In finding our way forward, we can do no better than to look up your substantial writing on the subject. One such profound idea reads: ‘In the struggle for freedom of information, technology, not politics will be the ultimate decider.’ In just 15 words, you summed up a whole debate that has been raging on for centuries. You were amused to hear media mogul (and your ardent fan) Rupert Murdoch was fond of quoting these words. These days, your words are being cited in relation to another Australian: Julian Assange.

The co-founder and editor in chief of WikiLeaks has become one of the planet’s top newsmakers. His entirely web-based, volunteer driven effort seeks to end secrecy in governments and corporations. Whistle-blowing is as old as the media; WikiLeaks provides a secure digital platform where public-spirited individuals can engage in it. We might argue about their modus operandi, but WikiLeaks must be doing a few things right to have rattled so many centres of power around the world! Even as he is demonised by some, Assange is attracting the sympathy of millions.

I wonder how you would have reacted to the persecution of Assange. You cheered when ICTs enabled the free flow of information and empowered human rights defenders – for example, when the Iron Curtain crumbled and the Berlin Wall fell. You were gleeful when government censors across Asia were undermined by comsats and the web.

Is Assange simply continuing, in his own style, what people like (the web’s inventor) Sir Tim-Berners Lee and you set in motion? And isn’t it highly ironic that this latest info-tsunami hits the US government under the watch of a President who himself rode the new media wave to the White House just two years ago?

President Obama must wonder whether social media tools are better suited for campaigning than for governing. Certainly his Secretary of State has not shown much understanding of the new media realities in reacting to WikiLeaks’ dumping thousands of classified diplomatic cables. She apparently doesn’t want to practise the principles of internet freedom so loftily preached to foreign countries and governments.

Cablegate is only the latest reminder that we are living in a world where few, if any, secrets can be guarded. Governments have long argued they had a right to track and probe the private lives of us citizens, apparently for our own good. Now, a few geeks have turned the tables…

Whether we like it or not, welcome to the Global Glasshouse!

Again, you foresaw this long ago. Surely, there must be somebody at the State Department to advise their bosses that the Age of Transparency is unstoppable? And was there no Arthur Clarke fan to remind the mandarins of diplomacy of your time-honoured dictum when confronted with new technologies: ‘Exploit the inevitable’?

These are the times, Sir Arthur, when we really want to repeat your celebrated question (originally asked in relation to the US Space Programme): Is there intelligent life in Washington?

–-Nalaka Gunawardene is a science writer who worked as a researcher for Sir Arthur C Clarke for two decades. He blogs on media, society and development issues at http://movingimages.wordpress.com.