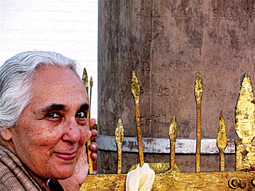 The human mind craves travel, be it through geographical terrain or through time. Take a train, trek or bicycle, and you suddenly find yourself in different surroundings. This translocation fulfils the intellect’s craving for new perspectives, contexts, views and interactions. The same holds true for time travel, fulfilled through a scholar’s recollection of history, or by contemporary presentations of facts and observations saved over the centuries, such as by the founder-emperor Babur in his Baburnama. Sadly, not everyone was a Babur, with superior observation skills and the wherewithal to record. So, we poor souls of the 21st century are left to ruminations and conjecture – unless the historian comes along to bring the past alive.

It is a matter of fascination, the answer to the question, ‘What was the terrain of the Ganga plain like in the time of the Buddha?’ When you fly over the region north of the Ganga, from Purnea to Gorakhpur to Faridabad, the entire expanse is a patchwork quilt of landholdings. But back then, most of this would have been jungle, punctuated – as seen from the Pushpak Vimana – by forest clearings, villages, towns and some agricultural areas. The Indus Valley seals indicate that the habitat of the one-horned rhinoceros extended to what is today a desertified Sindh, which indicates the jungle was once lapping at the foothills of Balochistan. Human intervention or climate change might have changed that terrain aeons ago, but the Ganga region – undifferentiated, incidentally, from the Indus watershed by any significant ridgeline – would have remained largely wild.

As a child, I got to see how the continuous jungle of the Ganga would have looked. In travels through the Nepal Tarai, a sliver of the earlier expanse still existed. In the last three decades, this tract has seen decimation through lumbering, road-building and the settlement of migrants from the northern hills and southern plains. Seeing the jungle of Parsa district, on the way to the Indian border, by narrow-gauge railway down to Raxaul, you could imagine this extending all the way down to Pataliputra. Amidst the stands of sal, riverine forests, grasslands and meandering rivers, there would have been wildlife in abundance, from the tiger, rhino, crocodile (mugger and gharial) and Susu, the fresh-water dolphin.

But what of humans? There would have been indigenous communities in clearings, principalities and kingdoms, which is what brings us to Lumbini. A friend suggested long ago that perhaps the way eastwards for migrating and trading communities from the populated northwestern edges of the Subcontinent would have been along a track on the talus slope of the Shivalik ridgeline up to present-day Lumbini, from where the route would have go to the southeast, to the iron-producing areas of present-day Jharkhand. ‘Look at the places where Siddhartha Gautam preached and travelled, and you will see the pattern and human evolution of that time,’ was his conjecture.

Lumbini is a place that has the power to evoke history, despite today being made up of nondescript agricultural flats. How was it that, two and a half millennia ago, an area of no more than 30 square kilometres produced five historical buddhas – Kanakmuni, Krakuchhanda and others, one of whom we revere as the Sakyamuni Gautam Buddha? In the minimally excavated ruins of Kapilvastu, one would probably find evidence of a vibrant economy, which is the first requirement for the growth of ‘civilisation’ that would evolve towards spiritual quest.

And so, it was the recent privilege of political scientist Hari Sharma and myself to escort historian Romila Thapar to Lumbini. Once there, we took along Lumbini’s archaeologist-in-residence Basanta Bidari, and travelled through an inhabited region where the tiger visited archaeological digs not so long ago. But the jungles have gone in the blink of an eye, in historical time. Amidst the agricultural flats, the great pillars left by Emperor Ashoka to mark the sites related to the various Buddhas are left unattended. These massive, polished cylinders, carted up from the Chunar hills south of the Ganga near Benaras, could be desecrated by anyone today with a small chisel – ‘Pranav loves Shreya’.

A sense of the life and times comes in a hefty dig report produced by Japanese archaeologists, a single copy of which is available at the local Hokke Hotel. With artefacts, skeletons and ornaments photographed on site, it gives a flavour of long-ago humanity to a place that is otherwise nothing but a set of low walls and trenches. Bereft of their context, the artefacts in a nearby museum showcase are robbed of their ability to spark the average imagination.

The finest moment of time travel is when we arrived at the nativity site of the Sakyamuni, a place Romila Didi had visited a half-century earlier. The Ashoka Pillar here is more or less intact and protected; the inscription in Brahmi script beckons: we have the authority on the great emperor right in front of us. The inscription reads, ‘Emperor Piyadasi, beloved of the devas, in the 20th year of his reign, himself came to this site…’

Excited as a youngster, Romila Didi says, ‘It is this term himself that brings the inscription to life. It could only have been Ashok himself directing this to be written, and so it is he who is speaking to us through the centuries through this pillar…’

This is as close as you can come to reliving the past. I wish Romila Didi would tell us more.