The former President of the Maldives speaks to us ahead of the upcoming presidential election. 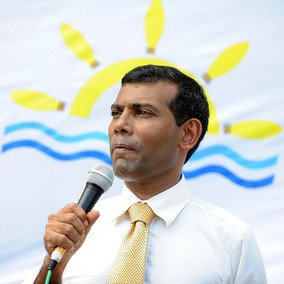 With the Maldives’ third multiparty presidential election just days away, we caught up with former President Mohamed Nasheed on the sidelines of a press conference held in Colombo on 21 September. In the brief audio chat with our Editor Aunohita Mojumdar, Nasheed talked about the challenges facing the country’s democratic process and the difficult circumstances under which his party had had to organise. He also spoke about his uncomfortable but pragmatic alliance with former president and rival Abdul Gayoom, as well the Maldives’ increasingly complicated relations with India and China.