Democracy is being challenged as the Maldivian government leverages to make the opposition toe the line. 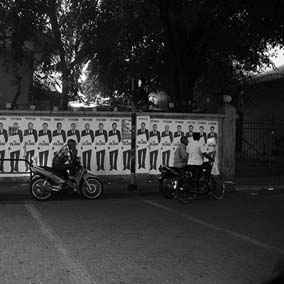 The Maldivian political narrative is more fast-paced than a John Grisham novel and has more twists and turns than an airport thriller. The latest subplot was set in motion when reports began to circulate of President Abdullah Yameen Abdul Gayoom’s wish to replace Dr Mohamed Jameel Ahmed with Tourism Minister Ahmed Adeeb as the vice president by 26 July – Maldives’ Independence Day.

A constitutional amendment requires an affirmative vote from three-fourth of the 85-member Majlis, the Maldivian Parliament. President Yameen’s Progressive Party of Maldives (PPM) and coalition members enjoy a majority with 48 seats, which was insufficient to get the required 64 votes. So the President set out to acquire the remaining ones.

How can the Maldives Democratic Party (MDP) claim to stand for democracy and make a deal with a government that is turning out to be increasingly authoritarian?

Over the last few months, the Yameen government has been putting pressure on the JP, which split from the PPM in January 2015, through its legal actions against JP leader and tourism tycoon Qasim Ibrahim. Qasim’s Villa Group was slapped with a USD 90 million tax bill. JP Deputy Leader Ameen Ibrahim reportedly said  that the government has “economically paralysed” Qasim, preventing his participation in opposition activities. Not unexpectedly, Qasim’s party yielded to the pressure and issued a whip to support the amendment. He has also declared that he will give up the leadership of the party. Incidentally, the new upper limit of 65 years for presidential candidates disqualifies Qasim to contest for the next parliamentary elections in 2018, when he will be 66.

The next step for the government should have been an impossible hurdle: getting the stronger, bigger and more democratic opposition – the MDP – to agree to the amendment. Few believed Yameen could force MDP’s hand. But he did. He offered MDP the ultimate prize: a degree of freedom for Mohamed Nasheed.

Nasheed, former President and leader of MDP, was sentenced to 13 years in prison on terrorism charges on 13 March this year. It is widely believed that Nasheed’s trial for ‘terrorism’ was a farce. He was charged and convicted within 19 days with little access to legal support. President Yameen made it quite clear he had no regard for concerns raised by the international community. Amnesty International called the sentence a “travesty of justice” and the UN expressed doubt in the trial and called it unfair. But the government did not change its stance. “People in faraway lands” have no say in Maldivian domestic affairs, was the president’s response. When Nasheed’s supporters converged at the capital from all over the country took to the streets on May 1, they were pepper sprayed, tear-gassed, beaten, and imprisoned by their hundreds. Irrespective of protests inside the country and international disdain, Yameen has not budged from his position. He keeps repeating that he has no say in the matter since it falls under the ambit of the judiciary.

On 15 June, Nasheed appealed for clemency, which was, unsurprisingly, declined. The former president continued to languish in prison, his privileges taken away one after the other. Absurdly, his lawyers were criticised for laughing with him and the Home Minister accused his legal team of visiting him just to “entertain” him, imposing new restrictions on their visits. A few days later, even his parents were barred from visiting him. Nasheed’s lawyers publicly criticised the unsanitary conditions of his cell, which was adjacent to the prison garbage dump, they said.

Days turned into weeks and weeks went into months in this new round of captivity for Nasheed. Police crackdowns on protestors increased. Eventually, numbers turning up at protests fell, as was evident in the turnout at the 12 June protests. A democracy fatigue of sorts set in.

However, on 21 June, three days before the amendment was put to vote, Nasheed was suddenly returned home “on Doctor’s orders” for three days. As the MDP took the decision to support the amendment, on a parallel move, the government increased Nasheed’s stay under house arrest was also increased to two months. PPM has denied that it offered MDP a deal. But in light of obvious facts, it is not difficult to join the dots. While the government’s steps surprised no one, many were taken aback by MDP’s compliance.

Given that the amendment is to pave the way for Adeeb to be appointed as Vice President, what could have pushed MDP to vote? Adeeb has a number of allegations of corruption against him; his name has been associated with the alleged Sri Lankan drug dealer Duminda Silva; the murder of former MP Dr Afrasheem Ali; and also with the abduction of journalist Ahmed Rilwan who still remains disappeared. With a man of Adeeb’s reputation as second-in-command of the country, where is it headed? And how is it politically sound for MDP, which had been quite vociferous in hurling  accusations at Adeeb, to pave the way for him to reach the top?

From the perspective of Maldivian democracy, there is little room to argue that the deal was a major setback. As many critics said, how can MDP claim to stand for democracy and make a deal with a government that is turning out to be increasingly authoritarian and more blatantly ruthless than the 30-year regime of the Gayoom elder? How can they argue against the policies of a government when they themselves are supporting some of its worst moves?

These questions caused one of the most significant rifts among MDP members in recent times. The answers have centred mostly on Nasheed’s predicament.

Both sides of the divide in MDP have valid points to make. The deal pushes MDP down from their moral high ground, and it is a major setback for the Maldivian fight for governance based on democratic principles. It is also true that Nasheed and a few supporters alone cannot continue to be sacrificial lambs in what is going to be a long hard struggle if democracy is to be restored. There is a black-and-white side, and then, vast amounts of grey.

What the deal has done is reveal some hard truths about the state of the Maldivian democracy: the desire for democracy does not appear paramount among a majority of the population; and the residues of dictatorship continue to be strongly embedded in the national psyche and the country’s institutions. A majority of parliamentarians are giving in to coercion; the judiciary has a history of partial decisions; there are no independent institutions left; and, only a few civil-society organisations are left in the fight for a government of the people by the people, such as, Transparency Maldives and Maldivian Democracy Network. Civic education and the teaching of democratic values and norms are scarce. The general population’s income and living conditions have not been improving either. Most are too poor to be giving up what little they have, and too afraid to lose their jobs, to join protests en masse even if they understand the need for such actions. The rich, meanwhile, are unwilling to put their wealth at stake to join the fight for democracy; they would stand by the new regime rather than fight it.

Meanwhile, Yameen continues to ruthlessly push ahead with his agenda. His government recently hired Omnia Strategy, an international consultancy firm owned by Cherie Blair, the wife of former British Prime Minister Tony Blair, to underscore the “government’s commitment to strengthen democratic institutions of the State and to promote a culture of respect for human rights in the Maldives, adhering to international norms, while retaining its unique character.” But the firm has been assisting the government in defending itself against the charges of arbitrary detention of Nasheed to be heard at the UN.

On the other hand, the Human Rights Commission of the Maldives has been left powerless by a recent Supreme Court ruling which forces the Commission to forfeit its independence and follow the court’s instructions in fulfilling its constitutional remit. The Supreme Court has also issued an 11-point guideline barring the independent body from communicating with foreign organisations without government oversight. The expected appointment of Ahmed Adeeb as vice president before Independence Day will bear testimony to the allegation that legislation is being controlled with personal agendas in mind.

On June 30, the Majlis notified Vice President Jameel, who is in London now, of the resolution to remove him from the position. He has been given 14 days to respond to the charges against him. Jameel has defied President Yameen’s orders to return to the country and criticised the constitutional amendment. Though he has released a statement from London, saying the only judgment he fears is that of god, it is yet to be seen if he responds to the charges made in the resolution by 13 July.

Why is there such urgency to Adeeb’s appointment and why must it happen before 26 July? The desperation to have ‘the one’ person Yameen can trust as vice president before this particular date is, many reports argue, because Yameen is scheduled to undergo a critical surgery before then. Adeeb, it seems, is the aide he trusts for the role.

As in any thriller – or horror story – we have no choice but to wait until the author himself reveals what he has planned next. Watch this space. The title of the next chapter might well be ‘President Adeeb’.

~Azra Naseem holds a PhD in international relations from the School of Law & Government at Dublin City University, Ireland, and is a research fellow at the university.

Azra Naseem is a writer, and postdoctoral researcher affiliated with the Institute for International Conflict Resolution and Reconstruction (IICRR) https://iicrr.ie/team/research-fellows/, School of Law and Government, Dublin City University. Naseem is a contributing editor to Himal Southasian.