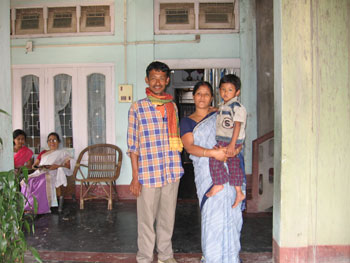 Usually, legends have a larger-than-life aura around them. They are masters of all they survey. While this may be the general trajectory, it does not explain how legends are born (and killed) in small towns in far-off places like Assam. Nilikesh Gogoi was a coal trader, a poet, a farmer, a collectivist, an oral historian and a man who resolved conflicts that arose between hill people and authorities. He was, in short, a local legend.

On 23 January 2007, Nilikesh and his two of his business associates were returning from a trip to the hills that border Gelekey in upper Assam. On the way, they overtook a slow-moving jeep manned by Central Industrial Security Force (CISF) personnel. Just when they were about to clear the vehicle in front on them, they were shot at. Nilikesh Gogoi and his pillion rider, Bholu Gogoi, died instantly, but their companion, Arup Saikia, survived the shooting. The fact that the CISF troops felt empowered enough to take these lives in this manner – and expected to get away with it – is a statement about the tragedies that unfold under the Government of India’s current security policy for the Northeast.

Nilikesh Gogoi was the undisputed scamp and pixie-king of the Assam-Naga foothills. His universe stretched from Sibsagar town to the villages of Anakhi Imsen – not a very large tract of land, but stable enough to be a storehouse of history, myths and folklore. He crisscrossed the winding Pioneer Road, whizzed across the Lahdoigarh Line, and stumbled around as though borders made not an ounce of difference. Truth be told, he was not too convinced by modern maps and surveying techniques. Over several shots of rum, he would reel off names of villages and towns that were the domain of the Naga people in the olden days. At times like this, his conversations – like his wonderful imagination – would be free from chronological and political fetters. The past, with its myths and immense possibilities of romance, was what could happen tomorrow. Spouting such sentiments, he was irresistible.

Rum and tales
One day, not so long ago, Nilikesh strapped to his back a rucksack belonging to this writer’s partner. He then proceeded to take her up a treacherous mountain track to meet with her fellow Naga people, who lived along the frontiers of a plantation complex. He explained to her that he needed her rucksack because he was carrying with him something very important – a jug of rum, along with stories about how the planters came to the area during the 19th century, cut the forests to make tea chests, and pushed the Nagas further from the valley where they would come to trade. These stories grew bigger and more real as he narrated how the Lahdoigarh Line sequestered the hill people, and how planters brought in troops to secure their precious investments.

Nilikesh’s stories, fuelled by a bit of rum, spoke of the times when his ancestors, realising the limits of their power, had made peace with the Naga people and evolved a civilised system of respect for each other’s authority. He liked that part of the past. He half-jokingly wore the mantle of a latter-day Supatphaa (Gadadhar Singha), the great Ahom adventurer king of the 17th century, and issued mock commands to his grinning friends. Later, in the course of this rough ride up the mountain, he would look remorsefully at the ground while being berated for his impossible projects. To make up for his almost adolescent trespass, he sang a Naga Bihu song: “Milakpani te ahibo, sopna te dekhibo …” (I shall come to the River Milak, and you will see me in your dreams). That song was a personal anthem of this writer, when my colleague and I walked the streets of Bangkok trying to connect with our Thai cousins. Sitting on the streets of the city with a bewildered audience, we sang his song and it made us proud.

Nilikesh’s grasp of history and politics was unparalleled. He kept a critical distance from dominant political parties and organisations. His universe was rather small, but like any good activist, he knew it well. The plantations that dot the landscape of Gelekey, the local marts where people barter their good and incur debts, the small settlements of migrants – all of these were part of his politics and life. He knew that the lines between legality and illegality were ambiguous in the frontiers, and that the presence of a gun blurred those boundaries further. As with any person who has to survive such a predicament, he pushed himself into work that would make life a little more to his liking.

He had a bed and a warm meal ready for him in all the Naga villages along the foothills. To them, he was a friend who could talk to the police and contain the type of conflicts that would arise when Naga villagers would come to the valley markets. For him, the Naga villages were his home. His political strategies were a matter of scale. Of course, he also spoke about the indignities heaped upon the people of Iraq, but he was equally passionate about the collective farm that he had helped to start. He was always in a hurry to point out where history, politics and economy met up in his universe of 40 square kilometres.

Ghosts and spirits
One was always surprised with Nilikesh’s natural ability to navigate through the vicious politics that surrounded the various security agencies in the area. For a small place, Gelekey has an inordinate number of people with guns. The government and security agencies would have us believe that this is because there are Naga and Assamese rebels in the area. Even if that were true, the government, not to be outdone, has thrown in its companies of army and paramilitary personnel, thereby making the area a veritable garrison. Nilikesh saw these security forces as temporary trespassers, like the British planters. He charmed them, perhaps even infuriated them, but he always looked right through the barrel of their guns.

His small-town life was always a chaotic run for documents, titles, the occasional conversation with a friend, a few stern words to errant associates; he took all of this – including runs-in with the authorities – in stride. In the evenings, when friends dropped in from faraway places, he would wrap his fingers around a cup of tea and narrate mad stories about ghosts and spirits. For those of us not used to the layered life of Gelekey, it seemed that the ghosts and spirits were all around us. He would taunt these ghosts, as he would taunt the armed paramilitary personnel for their corruption. He was never exhausted, and on such evenings he was nearly unstoppable.

Ironically, that is what the CISF is now saying – that Nilikesh did not stop when ordered to do so. His associate who survived has a dramatically differing story – that they were shot and killed without any provocation. There is talk of a high-level cover up, even as the state government announced a compensation package and arrested one of the accused. As one tries to come to terms with the loss, one realises that this is an unending and vicious cycle of lies and subterfuge. Following all the innumerable loss of lives in Assam, the administration will walk the tired road and hope for things to become a little quieter, before ploughing the barren fields of security and counter-insurgency.

They may reduce Nilikesh Gogoi to another statistical victim of counter-insurgency, but if he were alive he would cackle into his glass of tea. He always believed that legends could not die; they always reappeared in time. This, then, is his time to reappear.

Nilikesh Gogoi’s universe has just become bigger. From Palo Alto to Purona Bosti, those who knew him and what he stood for will sing his Milakpani song. Those in power will wonder what this song means. It is a reminder of peoples’ histories, passions and dreams that run against ambitious state-driven projects. It is, after all, a simple song about the legends, myths and folklore of the foothills. It is about how our people live despite the conditions imposed upon us, and that, in some wild, wonderful way, justice will be done.