Skip to content
Commentary > Letter from Myanmar: Journalism under attack

Letter from Myanmar: Journalism under attack

Myanmar’s civil society and journalists are divided over the landmark freedom-of-press case. 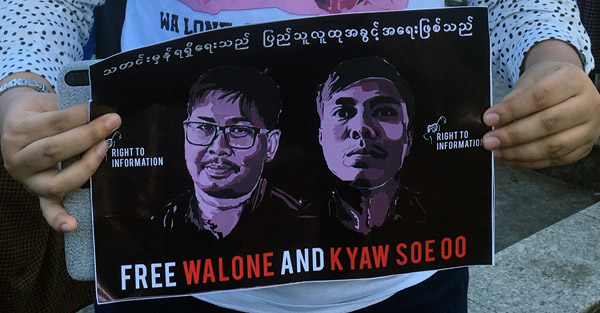 All photos by the author.

In September 2018, youth of Yangon came out in dozens to protest, gathering outside Yangon’s central Mahabandula Park under the scrutiny of the police. They demanded the right to information and the release of Wa Lone and Kyaw Soe Oo. Mostly under 30, the activists were energised and chanting slogans of “Free Wa Lone and Kyaw Soe Oo”. The placards they held up read: “If press freedom is shut down, democracy will fail”, “The public has a right to information” and “A massacre is not a state secret” – bold statements in a country where many media organisations blackout any news about the Rakhine State, except the official narrative.

Myanmar journalists Kyaw Soe Oo and his colleague Wa Lone were found guilty of breaching the Official Secrets Act and sentenced to seven years in prison earlier this month. They were arrested in December 2017 while investigating a mass grave in Inn Din village in the Rakhine State. It was established during the trial that they were trapped by the police who invited them to a Yangon restaurant to handover ‘secret’ documents. The story they were working on was later published in February 2018 by Reuters and the policemen responsible for the Inn Din killings were sentenced. Human-rights defenders, however, say the judgement against the two journalists sent a clear message that Myanmar would punish anyone revealing atrocities happening in Rakhine – it would be considered an anti-national act. Not only has the government banned the use of the word Rohingya, terming them ‘Bengalis’, but prevented reporting on the Rakhine, even banning the team of United Nations investigators from visiting the area.

Until now, the government view that taking up the cause of the Rohingya is anti-national seems to have been reflected in the media and civil society. The country’s media has in fact exercised self-censorship, mostly publishing stories which reinforce the official narrative about the Rohingya crisis.

It is still unusual to see public protests against policies of Aung San Suu Kyi’s National League for Democracy government, especially if there is a direct or indirect link with Rakhine. However, it is also a common belief that media freedom is enshrined in the doctrine of democracy, which explains the more widespread protests on the incarceration of the two journalists. It is also the reason why throughout the trial many Myanmar activists and journalists remained hopeful that the Reuters duo would not get harsh punishment or would be pardoned soon.

On the day of the verdict was announced activists and journalists expressed their anger and disappointment. One journalist in Mandalay broke his camera in protest. Outside the Insein court, journalists and rights activists were seen banging the police van that was taking Wa Lone and Kyaw Soe Oo away, and shouting the slogan: “Let them speak”. Though there is no storng tradition of court reporting – neither all judgements nor all trials are public – the Reuters‘ case was an exception and the trial was widely covered.

One leading Burmese daily, Seven Day, published a partly blacked-out front page as a protest. However, members of the press council of Myanmar seem to be divided over this case. Some are confused whether to stand up for professional journalism or the ‘national interest’. One member of the press council said, “If you read the judgement carefully you can’t say who is right.” He agreed that it is the job of reporters to collect documents and that Wa Lone and Kyaw Soe Oo were doing their job, but didn’t want to question the ruling. The inaugural statement of the new head of the Myanmar Press Council, Ohn Kyaing, went even further. He said he would use his new position to protect the government and military from prosecution by the International Criminal Court. The ICC has said that it can prosecute Myanmar over alleged crimes against the Rohingya.

Many journalists, legal experts and human-rights defenders have however rejected the court ruling and called for an amendment to the draconian colonial-era Official Secrets Act under which the two journalists were sentenced. More than 80  civil-society organisations issued a strong-worded statement condemning the verdict, calling the court’s decision irrational and a blow to the right to information and media freedom. The free-speech advocacy organisation Protection Committee for Myanmar Journalists and the youth activist collective Generation Wave called for a global campaign for Wa Lone and Kyaw Soe Oo.

Meanwhile, jailed Reuters journalist Wa Lone has written a children’s book Jay Jay the Journalist. The story revolves around a curious boy, Jay Jay, who likes asking questions and uncovers a pollution scandal in his village. But this interpretation of the role of journalist doesn’t suit  some of Myanmar’s senior  journalists and politicians.

At the World Economic Forum meeting in Hanoi, Suu Kyi defended the court’s ruling against the Reuters journalists for the first time in public and said the judgment had nothing to do with freedom of expression at all. She hinted that freedom of speech activists  “have not fully read the verdict”. Her statement has angered supporters of free press internationally and divided her loyalists at home.

Others have faith that the Suu Kyi herself will return to her democratic roots. One of them is the wife of Kyaw Soe Oo.  “My husband didn’t commit any crime. He was doing his job. I hope he will be united with us soon,” said Chit Su, who expects her husband will be pardoned and reunited with the family. Her faith in the Lady is unwavering like that of many NLD supporters in the country. The Lady, meanwhile, seems to defy these expectations.

Annie Zaman is a writer and researcher who divides her time between Lahore and Yangon.