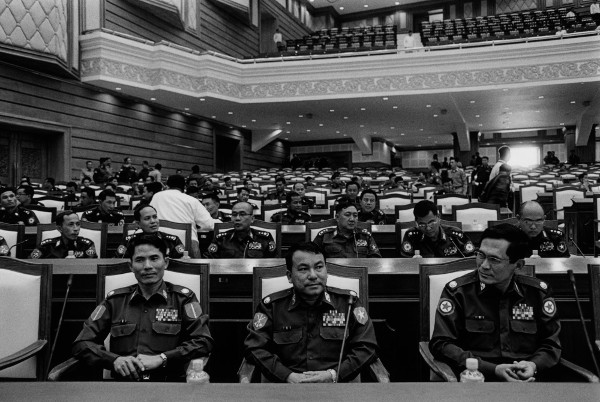 The unelected in Burma’s new parliament. Military commanders take their positions in the new parliament building. The Pyithu Hluttaw, or lower house of Burma’s parliament, is dominated by former soldiers, their positions guaranteed under a constitution which was ratified after a fraudulent referendum in 2008. Photo: Nic Dunlop

As the humanitarian crisis of the Rohingya has focused attention on Myanmar, Himal Southasian is making its special issue on Myanmar publicly available in the interests of an informed debate about the country. Our volume Myanmar: Troubled Transitions not only addresses the Rohingya question, but takes stock of Myanmar at a moment of change. Our authors provide an in-depth analysis of contemporary Myanmar, looking at the country’s emerging economic model, its extractive policies, the civilian-military power balance, geopolitical developments, ongoing ethnic conflicts, in the process revealing how these issues intersect. Also, PEN Myanmar’s Ma Thida’s article on freedom of expression, and our infographics and photo essay provide a close look at the country’s recent militarised past.

The package will interest not just researchers and scholars of Myanmar or Southasia, but anyone who seeks to understand issues like the Rohingya crisis in the context of the country’s troubled transitions.

A comprehensive historical and contemporary account of the Rohingya crisis by Salil Tripathi.

Yola Verbruggen on the exclusionary nature of the peace process in the long history of ethnic conflict in Myanmar.

Will democratic Myanmar be fueled by dirty energy, asks Edith Mirante in her analysis of the country’s coal-dependent energy plan.

Writer and president of PEN Myanmar, Ma Thida, who was sentenced to 20 years in prison on how decades of dictatorship has affected the psyche of a nation.

Where does the international law stand on the question of stateless Rohingya, explores Michael Caster.