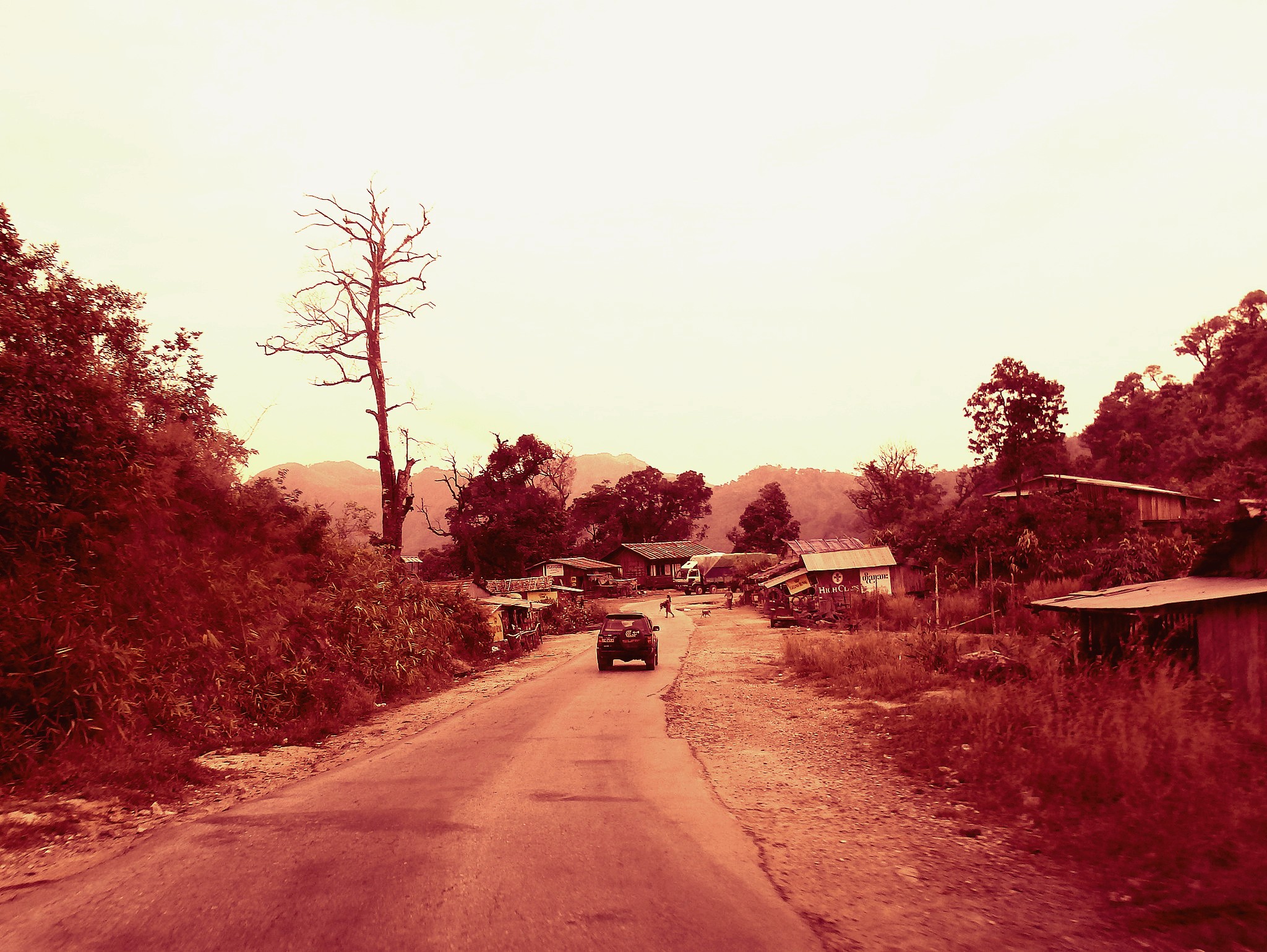 The dangers of reporting on Myanmar’s border-security forces and their business interests.

Journalist Naw Betty Han rubs the bruises on her wrists left by the handcuffs she was forced to wear while detained for 27 hours by the Kayin State’s Border Guard Force (BGF) – a unit under the command of Myanmar’s military. In early March 2020, Naw Betty, a reporter for Yangon-based magazine Frontier Myanmar, was on assignment in Myawaddy, a border town along the Thaunggin-Moei River across the Thai town of Mae Sot. She was taking photos of a casino construction site with Myanmar Times photographer Mar Naw when she was approached by three men.

They accused the two of photographing the nearby Kayin State BGF base. Despite their media accreditation, the two journalists’ backpacks were searched and all of their photos deleted. Before they were eventually blindfolded, handcuffed and driven to one of the Kayin state BGF headquarters 20 minutes away, Naw Betty was able to send messages to friends about her predicament. For this, a BGF soldier stepped on her hand with his boot and cracked her phone screen with the butt of his flashlight. She showed me the bruises on her fingers and her damaged smartphone – somehow still working – to prove it. But her message reached colleagues in Yangon and a social-media campaign soon began to alert the authorities about Naw Betty and Mar Naw’s captivity. They were released the next evening.

The Kayin State BGF tried to distance itself from the incident, citing the detention as an unsanctioned overreach by a junior soldier. However, the attack on two journalists was likely a response to increased scrutiny of the BGF’s activities. The Kayin State BGF has stakes in several lucrative business ventures in the region, including a USD 15 billion project for a ‘new international city’ funded by controversial Chinese investors in the border town of Shwe Kokko, ten miles north of Myawaddy. These businesses have come under serious local opposition and media scrutiny, because they face allegations of land grabbing and have been accused of operating as fronts for online gambling. The source of investments are also dubious. Naw Betty herself has been reporting on the BGF’s links with Chinese investors and how the business nexus operates – often illegally and at the cost of the region and its residents.

Formed in 2009 and 2010 after the integration of several ethnic armed groups into the Tatmadaw, the Border Guard Forces are militias located along the country’s border with China and Thailand. According to the development organisation Asia Foundation’s 2016 report ‘Militias in Myanmar’, the country has 23 battalion-size militias, each 326 soldiers large, across its borderlands in Kachin, Shan, Kayah and Kayin states. As historian Thant Myint-U notes in his 2011 book Where China Meets India, “The Burmese military leadership… offered the ex-insurgent armies a deal on their future armed status: reorganize your men into a ‘Border Guard Force’, that will partly be officered by us and that will ultimately come under our authority.” Interestingly, among the country’s various militia groups, the BGFs are distinguished by the presence of soldiers originally from the Tatmadaw in their ranks.

The attack on two journalists was likely a response to increased scrutiny of the BGF’s activities.

In the Karen-majority Kayin state, the BGFs largely consist of a breakaway faction of the Karen National Union (KNU), which took up arms against the government one year after Burma’s independence in 1948, and was engaged in one of the longest running conflicts in the world until the 2012 ceasefire with the Tatmadaw. Known as the Democratic Karen Buddhist Army (DKBA), the split group signed a peace agreement with the military two years before the KNU did, and was eventually transformed into the Kayin State BGF. According to a 2020 report by the Karen Peace Support Network (KPSN), a network of Karen civil-society groups:

One of the leaders of the DKBA was Saw Chit Thu, a former member of the KNU Special Battalion 101 based at Wangkha… After helping the Burma Army [Tatmadaw] seize Kawmoorah, his DKBA forces were permitted to share control of the lucrative cross border trade in the area, including the logging business. A sawmill was set up north of Kawmoorah, and within a few years, DKBA families, workers and traders had settled around the timber camp and established the village of Shwe Kokko Myaing.

Colonel Saw Chit Thu now heads the Kayin State BGF central command, based in Shwe Kokko, which is located along the Myanmar-Thailand border and is home to around 6000, mostly Karen people. He is also the managing director of Chit Linn Myaing Co Ltd, the business arm of the Kayin State BGF. In recent years, the area has seen a surge of Chinese-owned private businesses, including the planned New City Project. Many believe that the town may not only become a gambling hotspot, but also a place for smuggling weapons, wildlife, drugs and human beings, as is seen in several border areas under the control of ethnic armed groups. The region is also seeing increased ethnic tension, with the local residents complaining about the influx of Chinese migrant workers, many of whom are undocumented.

She felt a need to cover the transition of the state from a battlefield to a marketplace, a process that has come to be known as ceasefire capitalism.

“These are sensitive issues and those groups involved [such as the BGFs] do not like CSOs [civil-society organisations] and media to investigate and report on these activities,” says Tom Kramer, the coordinator of the Myanmar Programme at the Transnational Institute, an international research and advocacy think tank.

In the three months leading up to her detention, Naw Betty had travelled from Yangon to Myawaddy seven times to investigate the Shwe Kokko New City Project and allegations that the BGF was providing protection to Chinese-owned businesses. She also wanted to continue reporting on the peace process in the Kayin State. As someone from the Karen community, she felt a need to cover the transition of the state from a battlefield to a marketplace, a process that has come to be known as ceasefire capitalism.

In principle, the BGFs come under the Ministry of Border Affairs, one of the three key government ministries controlled by the Tatmadaw (along with the Ministries of Defense and Home Affairs) according to the military-drafted 2008 constitution. In 2011, a government spokesperson said that armed groups must assume “the State’s duties as Border Guard Forces and regional militia forces in compliance with the constitution under the command of the Tatmadaw.” The Kayin State BGFs, therefore, are fully integrated into the military command structure. Journalists, civil society and human rights groups, however, argue that the BGF lacks oversight or accountability from the Tatmadaw, which itself lacks civilian supervision; one-fourth of all seats in national, state and regional governments in the country are allocated to members of the military, giving them an effective veto over any legislation.

Part of the problem is the unclear description of the force and its status in official documents, including the Constitution. According to Burma News International (BNI), a network of independent media organisations, “There is no official governmental document that defines their BGF policy. The people’s militia force is mentioned in the Defense Services, Chapter 7, of the 2008 constitution. However, the wording is vague and no details about the role of the people’s militia are provided.”

“They pointed guns at us and threatened to shoot us. They said we [had] betrayed Kayin people. I didn’t understand what they were talking about.”

This allows the BGFs to often ignore government regulations and the authority of local police and officials. In fact, despite the government’s suspension of the New City Project due to a breach of investment regulations, reports indicate the construction continued for some time. While the BGF chief said back in August 2019 that construction work at Shwe Kokko had been halted, according to a story in Frontier Myanmar from July 2020, both satellite imagery and onsite visits contradicted this claim. “The government finally confirmed in June [2020] that it had formed a tribunal to investigate the alleged irregularities at Shwe Kokko,” the report noted.

The BGF’s flouting of government regulations and undermining of Kayin State authorities, however, doesn’t necessarily mean this is a completely local affair. As the KPSN report notes, evidence indicates that the project couldn’t have gone so far without the Tatmadaw’s backing: “the Chinese investors’ confidence in extending construction far outside the ‘official’ permit, and in publishing their own extra-legal investment regulations, and most importantly, the absolute control of the BGF by the Burma Army”.

While reporting from Myanmar’s borderlands along Thailand and China remains particularly risky, gains in media freedom since the end of state censorship in 2012 have been steadily reversed over the last three years. This is evident in the continuing arrests of journalists across the country, the most well-known example of which was the arrest and prosecution of two Pulitzer Prize-winning reporters, Wa Lone and Kyaw Soe Oo. In 2017, the two had exposed the mass execution of several Rohingya civilians in a village in the Rakhine State. They were convicted, but later released from prison by presidential pardon in 2019. Both have since left Myanmar with their families.

In 2020, independent news organisations such as Karen News, and Rakhine-based Development Media Group and Narinjara News, have been banned from local telecommunication operator’s networks by the government for allegedly disseminating ‘fake news’. Yangon-based Khit Thit Media, Mandalay-based Voice of Myanmar, and Sittwe-based Narinjara News are all facing anti-terrorism charges for publishing interviews with the outlawed Arakan Army, which has been fighting for autonomy in the Rakhine and Chin states of western Myanmar. Today, Reporters Without Borders ranks Myanmar 139 out of 180 in its 2020 World Press Freedom Index, while Freedom House categorises Myanmar as ‘Not Free’.

Back in Yangon, Naw Betty couldn’t sleep for four days upon her return home; she had to see a therapist and take medication to treat her insomnia. “They pointed guns at us and threatened to shoot us. They said we [had] betrayed Kayin people. I didn’t understand what they were talking about,” she told me. She had told them that they weren’t in Myawaddy to report on BGF activities but to investigate businesses operating illegally in the area. Her explanation was ignored until Saw Chit Thu arrived. He had them both taken to the state capital, Hpa’an, and released. He assured them, and the media, that those responsible for this incident would be punished with up to 30 days in detention.

It’s hard for Naw Betty to believe Saw Chit Thu. She plans to return to Myawaddy to continue her investigative reporting. These days, she tells me, she can sleep without medication, but one thing she learned in captivity weighs heavily on her mind. “I learned from [the Kayin State BGFs] that before us they had arrested six others for taking photos,” she says. “I’m still investigating this. I didn’t get detailed information. I’m not sure if they’re alive or not.”

Adam Bemma is a journalist and media-development advisor based in Yangon, Myanmar.