Kaushik Ganguly’s transgender love story is a nuanced and unflinching account of life on the margins. 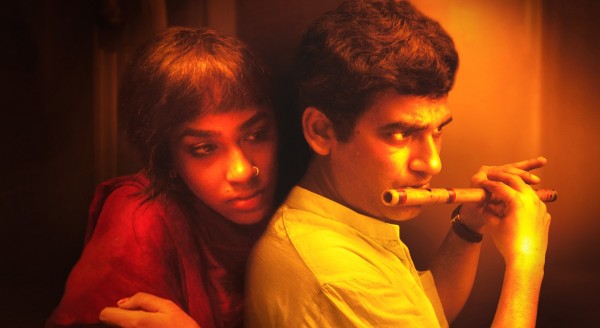 Nagarkirtan is the kind of film we need to see more often than we get to. Before its release in February 2019, word had spread that the film had bagged several National Film Awards in India, including a Special Jury Award (Feature Film) and Best Actor awarded to Riddhi Sen, who plays the film’s transgender protagonist. That the film had piqued popular curiosity in Kolkata was palpable; on its release it ran to packed houses and maintained momentum for weeks on end. Now, after running successfully in Kolkata for more than 50 days, Nagarkirtan brings with it the promise of braver, more sincere, representations of marginalised communities in Bengali cinema.

Pnuti, or Parimal or Pari or Rinku, is a woman who was assigned male at birth. That she was not allowed to settle into an identity is made clear by the various names she uses to refer to herself and by which she is referred to by her natal and chosen families throughout the film. Madhu, who works as a delivery agent for a Chinese restaurant and occasionally doubles as a flautist, is a cisgender man who sees Pnuti for who she is – a woman. Their relationship offers Pnuti validation of her femininity but also brings about occasional insidious crises in her self-image, owing to Madhu’s struggles with his sexuality. Madhu has only heterosexual language for his desire for Pnuti. While attempting to secure his own sexual identity, Madhu requires Pnuti to keep wearing her wig at all times, even to the point of telling her that he does not like her “patchwork” womanhood – a transphobic moment in the film that is at once crude and necessary to articulate how compulsory heterosexuality disciplines, limits and monitors Madhu’s desires – in turn, leading him to regulate Pnuti’s feminine presentation. What is to him a dire necessity, what gives him respite from his nagging contestations with himself, further contributes to Pnuti’s sense of her undesirability and dysphoria. In its nuances, the film holds a mirror to our society, where transgender individuals are obligated to pass within the binary, as either male or female, to qualify as worthy not only of love but claims to a dignified life.

At a critical moment in the film, Madhu asks Pnuti – evidencing his internalised homophobia – if it is possible for a man to fall in love with another man? Pnuti accommodates the conflicts in Madhu’s perception of their reality and reassures him that their relationship is evidence of its possibility. But, in the next moment, she asserts the truth of her being and asks Madhu if he had felt she was anything but a woman while they made love. Madhu answers in the negative – an affirmation of Pnuti’s being that also reveals her helplessness. Pnuti is always at the mercy of other people and their definitions of who she is – her family, the state, the societies and communities she inhabits.  Her agency is always limited.

The film also depicts the intersectionality of class and desire, not often found in more glitzy neoliberal representations of gender and sexuality. Pnuti earns her living by begging at traffic lights and lives with her hijra family in a dilapidated building coveted by promoters. Madhu occupies a room in a slum, which he eventually loses to gentrification. Madhu witnesses houses being razed to the ground; his gaze strays to a striking high-rise building in the distance. In the film, development exists in an unholy alliance with dispossession. This precariousness is crucial to the narrative itself: Madhu temporarily seeks shelter in the same building as Pnuti after being rendered homeless and their fondness for each other grows from there.

Madhu desires Pnuti as a woman; Pnuti’s desire of him and of herself is largely not in conflict with this. However, their socio-economic location is at odds with both their desires. Their imagination of a shared future where their longings would coalesce is wonderfully audacious but laced with fear and foreboding, communicating how queer choices often require the safety net of socio-economic privilege.

The narrative of the film depicts how class helps or hinders the ways in which identity and sexuality are played out in individual lives. Madhu brings Pnuti to Manobi Bandopadhyay (who plays herself in the film) – who became the first transgender college principal in India in 2015 –and requests Manobi’s counsel on Pnuti’s medical transition. In the process of weighing its possibility or impossibility, their respective class positions point to their divergent lived realities. Manobi reflects on the lives of many transsexual individuals that are lost due to medical negligence, and cautions Madhu and Pnuti against hasty procedures done by amateur practitioners. Manobi represents the few who can afford the cost of surgery, with the further privilege of discerning professional from amateur surgery. Pnuti represents those without either form of access.

Director Kaushik Ganguly’s Nagarkirtan – particularly the scenes between Manobi Bandopadhyay and Pnuti – are reminiscent of his 2010 directorial venture Arekti Premer Golpo.  In that film Abhiroop Sen or Roop (played by Rituparno Ghosh) is a non-binary urban filmmaker who is creating a documentary on Chapal Bhaduri (playing themselves in the film), the last living female impersonator in folk theatre, popularly known as jatra, in West Bengal. The chasm between Roop’s urban, educated, genteel, middle-class, gender non-conforming persona and Chapal Bhaduri’s rural, underclass, transfeminine existence, is conspicuous throughout the film. However, despite straddling different worlds, they share similar romantic histories of being abandoned by their respective cisgender male partners.

Likewise, Nagarkirtan also points to the converging vulnerabilities of Pnuti and Manobi despite the differences in their class positions. When Manobi asks Madhu if he would marry Pnuti if she undergoes successful medical transition – in itself exposing Madhu’s power relative to Pnuti’s – Madhu responds by saying he would. However, Manobi laughs and dismisses his claim, saying her own lover had made a similar promise but had not lived up to it. This scene in particular, through Manobi’s suspicion of Madhu’s intentions toward Pnuti, reveals Manobi’s vulnerability despite her class and caste privilege. Pnuti and Manobi’s stories are similar in moments of their betrayals and heartbreaks just as Roop and Chapal Bhaduri’s had been. Nagarkirtan carries forward the melancholia, destitution and dissidence of trans lives as portrayed in Arekti Premer Golpo, but is far more nuanced in its depiction of them.

At vital junctures, the film is insightful even in the absence of language – a great cinematic accomplishment for Ganguly. When Madhu’s sister-in-law changes her sari in front of Pnuti, there is an achingly real sense of Pnuti’s awe and implausible desire of such a body. When the cisgender woman expresses displeasure with her post-childbirth body and expresses admiration for Pnuti’s lean, and hence conventionally desirable, feminine frame, it reveals a cruel irony. Pnuti speaks through her silent appreciation and heartbreaking loneliness in that moment, when her existence is simultaneously externalised and internalised. It conveys Pnuti’s fleeting moments of vicarious dis/embodied living. Another way the film uses silence is in the manner in which it interacts with the city to narrate Pnuti’s and Madhu’s negotiation with it. Pnuti and Madhu frequently lock gazes at traffic signals, as oblivious to the city as the city is to them, revealing how many queer lives are lived quietly among us, escaping notice, often because of our collective indifference, or worse, neglect.

Had Nagarkirtan not been political, it would have been the film’s undoing. When Pnuti is compelled to beg in an area dominated by another hijra group to which she does not belong, her ‘authenticity’ is questioned and her identity is violently unsettled once again. However, even leading up to the film’s most violent scene, in which Pnuti is attacked, hijras are humanised and shown to be conscientious. When the hijra group is told that “one of them” had come begging before, they return the money taken from shopkeepers, telling them they should not have to pay twice. Ganguly is aware of hijras’ riotous struggle for survival and does not underplay it. This is one of the most critical moments in the film, through which it talks back to the diabolical myth that insists on imagining numerous cisgender men merely ‘pretend’ to be hijra for alms. When Pnuti fails to pass the test of ‘authenticity’, due to the lack of identity-affirming documents on her, the film carries the violence through to its very end, offering no comfortable alternatives.  The film inhabits the scourge and consequences of violence from that moment until the end.

Nagarkirtan moves back and forth in chronology so that time gains and loses credence in the narrative of the film, which prioritises the sensitivity of moments over temporal logic. It also destabilises a linear narrative of progress, because the film is anti-modernist and entertains no pretense of emancipation. It also does away with the urban-rural dichotomy as both co-exist in the film. Nagarkirtan is in this sense resolutely defiant of binaries; its tryst with multiple transgressions is in keeping with its subversive cinematic voice.

Nagarkirtan is sensitive and crude, gentle and unforgiving, buoyant and grim. It masterfully crafts themes of abandonment, identity as conflict, transphobia, familial violence and fear of uncertainty. But it also leaves us with love as affirmation, imagination as the beginning of hope, resistance as resource and subversion as resolve in the face of adversity. It pushes pleasure and desire towards conflict and eases it in the same breath, even though the easing is profoundly disconcerting. Nagarkirtan is an important film because it seeks to represent trans lives instead of speaking over them.

Sohini Chatterjee is an independent writer working on issues of gender, sexuality, culture, and politics. Her work has previously appeared in publications including In Plainspeak, Kindle Magazine, Café Dissensus and The Lookout Journal.