The ascendancy of the Hindu Right is likely to push India closer to Israel. 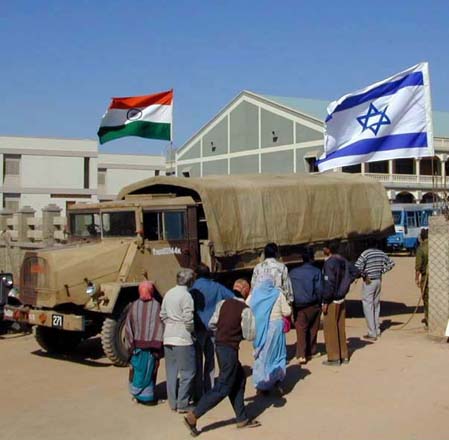 The elections for India’s 16th Lok Sabha, which resulted in an overwhelming mandate in favour of the rightwing Bharatiya Janata Party (BJP), were largely dominated by a clutch of domestic concerns including the state of the economy, unemployment and rampant corruption. As usual, matters of international import were largely ignored, or placed on the backburner. The foreign policy sections of the various party manifestos also did not provide much insight into the political ideology or thinking of the parties.

Curiously, one of the clearest indications of the political thinking of the BJP lay tucked away in a section of its manifesto titled ‘Foreign Relations – Nation First, Universal Brotherhood’. According to one crucial statement, “India shall remain a natural home for persecuted Hindus and they shall be welcome to seek refuge here.” This belief was clearly reflected in the BJP’s political campaigning, as prominent leaders including prime ministerial candidate Narendra Modi called for accommodating and settling Hindus who had come from Bangladesh, while at the same time vilifying Bangladeshi Muslim migrants and threatening mass deportation.

The BJP’s call for India to be a home for persecuted Hindus immediately brings to mind the Law of Return or aliyah in Israel, according to which Jews, anywhere in the world, can settle in the country and seek Israeli citizenship. While Israel may have succeeded in institutionalising such a policy, it appears bizarre that something similar could even be considered in India, a country with a rich democratic tradition and a diverse cultural and demographic composition.

Israel’s creation is rooted in Zionism, an ideology built around establishing a homeland for Jews in the ‘promised land’ of Israel in the aftermath of centuries of Jewish persecution.  Carved out of what was then the British Mandate of Palestine in 1948, the partition that led to the creation of Israel resulted in the displacement of hundreds of thousands of Arabs who had been long been inhabiting Palestine. Today, Israel is a small but strong state that continues to pursue a policy of expanding illegal settlements in the occupied Palestinian territories, particularly the West Bank. While its control over the lives, livelihoods and mobility of Palestinians is complete, Arabs in Israeli territory are also treated like second-class citizens.

In India, on the other hand, the framers of the Constitution were inclined to take a broad view of India and envisaged a secular and inclusive vision for the country. Individuals fleeing political or religious persecution, whether from Afghanistan, Bangladesh, Tibet or Sri Lanka, have sought refuge in India. And given India’s religious diversity, granting adherents of a single religion the privilege to claim India as a natural home sits uneasy with the country’s own claims of being a plural democracy.

The BJP has expressed different positions on how it would offer refuge for persecuted Hindus. Current party president Rajnath Singh called for citizenship for Bangladeshi Hindus, while his predecessor Nitin Gadkari had gone further, saying “any Hindu who is forced to flee any part of the world and comes to India on account of persecution has a right to Indian citizenship.” Though the party manifesto is silent on the issue of citizenship, Modi spoke of how Hindus “harassed” in places such as Fiji, Mauritius and even the US would naturally seek refuge in India.

While aliyah is a matter of Israeli state policy and is aimed at maintaining the demographic realities of Israel as a Jewish majority state, Hindus already comprise the vast majority of the total population in India, with the combined population of minority religious groups around 20 percent. Senior BJP leader Arun Jaitley later sought to clarify the party’s position by stating there would be acceptable cases of granting refugee status for anyone of Indian origin. But the weak ‘clarification’ could hardly diminish the impact of this section focusing on Hindus in the party manifesto.

Ideological parallels
While the example of Israel, which touts itself as a democracy despite asserting its nature as a Jewish state, cannot be wholly emulated by a country such as India, nevertheless there exist strong links between Zionism and Hindutva. The centrality of Zionist ideology in the formation and perpetuation of Israel is mirrored by the role of Hindutva as the primary motivator of rightwing political formations like the paramilitary Rashtriya Swayamsevak Sangh (RSS), formed in 1925 to propagate Hindu culture, and the BJP. The two ideologies converge in their attitudes on nation, race and minority communities.

“The common thread uniting Hindutva and Zionism is their shared understanding of the nation,” observes Githa Hariharan, a member of the Palestine Solidarity Committee in India and a convener of the Indian Campaign for the Academic and Cultural Boycott of Israel (InCACBI).

“The Nehru-Gandhian view of India was of a secular republic. Gandhi took a strong view against the Zionist movement on political and religious grounds. On the other hand, the views held on the nation by M S Golwalkar – a Rashtriya Swayamsevak Sangh (RSS) ideologue whose ideas continue to feed present-day Hindutva – were based on religion. This idea of the nation has a bearing on the kind of India the ‘Hindutvadis’ want to build, including the nation’s economic policy, foreign policy, and, of course, treatment of its minorities.”

Writing in the 1939 text We or Our Nationhood Defined, Golwalkar stated:

“India is therefore pre-eminently a Hindu nation, Hindusthan… the non-Hindu people in Hindusthan must either adopt the Hindu culture and language… must cease to be foreigners or may stay in the country wholly subordinated to the Hindu nation, claiming nothing… not even the citizen’s rights.”

Golwalkar wrote about how the project of “rehabitating [sic] Palestine with its ancient population of the Jews” was merely an attempt to “revitalize the practically dead Hebrew National Life”. The anti-Muslim dimension of Hindutva is also articulated by Golwalkar:

“Ever since that evil day, when Moslems first landed in Hindusthan, right up to the present moment, the Hindu Nation has been gallantly fighting on to take on these despoilers. The Race Spirit has been awakening.”

Even though the RSS – which Golwalkar once headed – disowned the book in 2006, Golwalkar and his ideas continue to have impact.

The totalising framework of Hindutva is marked not only by a negative portrayal of minorities, but also a denial of their distinct histories and legacies in India. For example, in 2009, RSS chief Mohan Bhagwat stated during a seminar, “There is no minority… All minorities in India are descendants of Hindus and have one ancestor.”

Just as Hindutva uses majoritarianism to frame its understanding of Indian identity, the Zionist conceptualisation of the Jewish nation forms the basis for Israel as an exclusionary state. Israel’s political environment is inflected with tendencies similar to Hindutva in relation to minority groups and Palestinians. For example, Israeli Prime Minister Benjamin Netanyahu recently demanded that Palestinians should not only extend recognition to Israel, but also recognise Israel as a Jewish state.

If Zionism is about the right of Jews for a homeland in Palestine, it has relied on the simultaneous denigration of Palestinians. Israel’s first Prime Minister and Zionist leader David Ben-Gurion referred to the “wretched and degraded effect of the Arab heritage” while another Israeli Prime Minister, Golda Meir infamously remarked, “There was no such thing as Palestinians, they never existed.”

The late Palestinian academic Edward Said noted that “Zionism initially portrayed itself as a movement bringing civilization to a barbaric and/or empty locale… The Arabs were seen as synonymous with everything degraded, fearsome, irrational, and brutal…” Hence while the Law of Return permits Jews to ‘return’ to Israel, no similar right is afforded to the millions of displaced Palestinians.

Deepening ties with Israel
Though historically India has expressed a strong commitment to the cause of Palestinian self-determination, this support has diluted over the years due to growing ties with Israel, particularly in the area of defence. With the BJP returning to power, Indo-Israel relations are set to deepen. Israeli Prime Minister Benjamin Netanyahu was among the first to congratulate the Indian Prime Minister-elect Narendra Modi, and the two leaders have expressed their interest in further enhancing cooperation between their countries. Even during his time as Chief Minister of Gujarat, Modi actively courted Israeli investment for the state.

Ties between the BJP and Israel have traditionally been close. Senior BJP leader L K Advani, writing in his blog, has described his role in the establishing of diplomatic ties with Israel in 1992. According to him, these ties were “fortified immensely during the six years” of the BJP-led NDA regime under Prime Minister Atal Bihari Vajpayee. Indeed, it was in 2003 that Ariel Sharon became the first Israeli Prime Minister to visit India. Furthermore, then Indian National Security Advisor Brajesh Mishra proposed an India-Israel-America axis to combat what was described as the common threat of terrorism.

Close relations with Israel have continued under the Congress as well, and according to a 2009 survey conducted by the Israeli Foreign Ministry in 13 major countries, India had the highest percentage of respondents (58 percent) to express support for the state of Israel. The two countries have strong commercial and economic relations, trade, agriculture and investment ties, cooperation in science and technology and cultural and educational exchanges. However, defence ties form the central component of the relationship. India, the largest arms buyer in the world, is now the top export target for Israel’s defence industry, and Israel is India’s second largest supplier of arms.

As Narendra Modi sets to reshape India’s political environment motivated by a strong commitment to Hindutva, intensified cooperation with Israel would be par for the course, given the overlapping agendas and ideological congruence between the dominant political forces in both countries. Perhaps a more vital question is to what extent the Modi-led BJP will enact exclusionary state policies as practiced by Israel or remains committed to upholding India’s democratic credentials, however imperfect they may be.

~ Urvashi Sarkar is a freelance journalist and currently works in the development sector. Her views are personal.