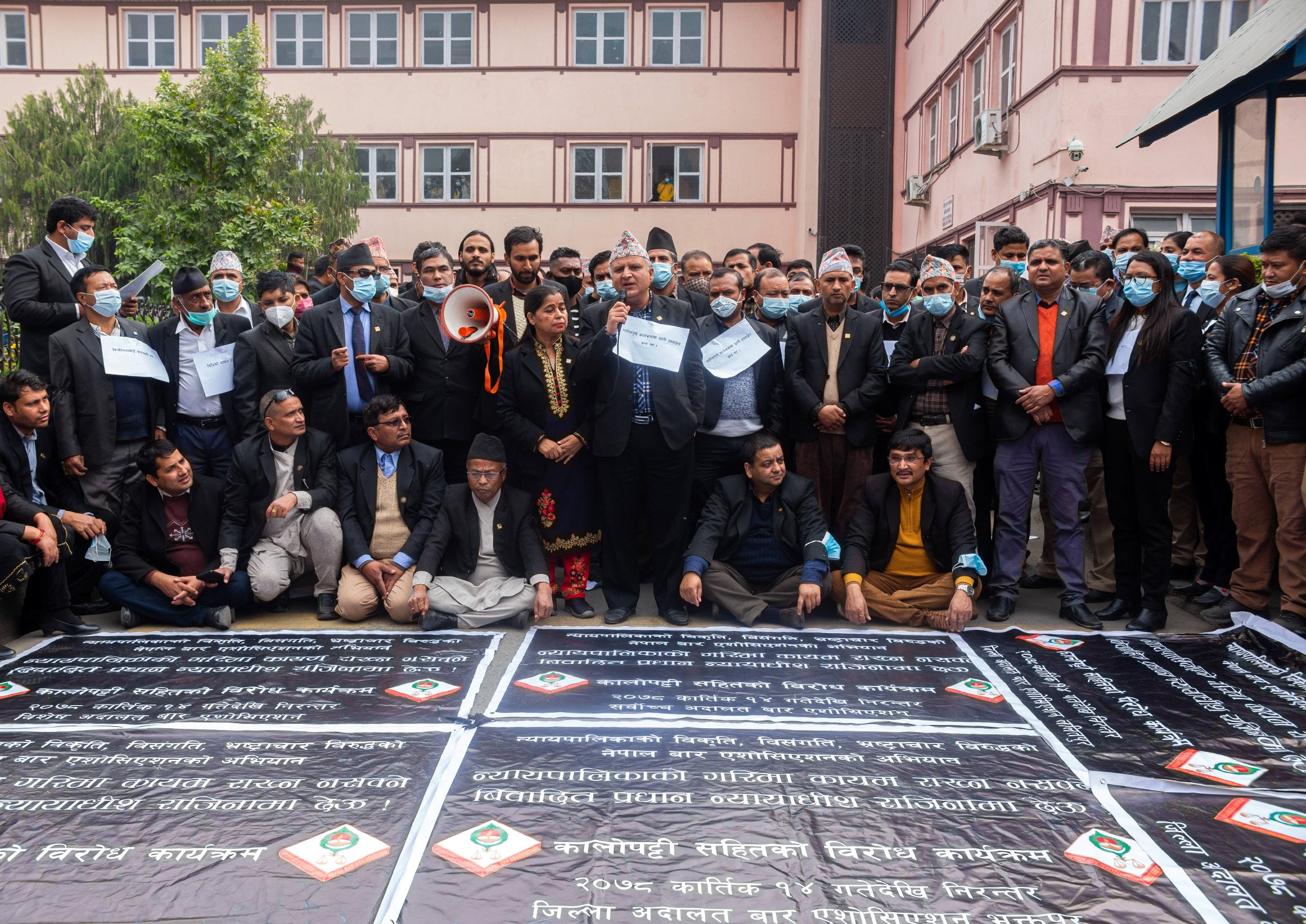 In late October 2021, in an unprecedented turn of events, the Nepal Bar Association (NBA) – an umbrella body representing nearly 20,000 lawyers in the country – along with retired justices of the Supreme Court and many senior advocates, publicly demanded that the current Chief Justice (CJ) Cholendra Shumsher Rana resign from his position. This occurred soon after the newly formed government led by Prime Minister Sher Bahadur Deuba, appointed Gajendra Bahadur Hamal, Rana’s brother-in-law, as a minister. This decision was allegedly on the request of the Chief Justice himself, which if true would be a blatant – potentially impeachable – disregard of the principles of separation of power and maintaining an independent judiciary.

More dramatically, 14 of the 20 office-holding Supreme Court justices too demanded Rana’s resignation and boycotted full court meetings called by him, indicating a deep fissure at the very top of the country’s judiciary. Remaining justices of the Supreme Court have also joined the campaign, refusing to hear cases for three weeks apart from habeas corpus petitions, and demanded judicial reforms, echoing a larger demand shared by many in the country. The NBA had also requested parties in the parliament to introduce an impeachment motion.

After months of uncertainty, 98 lawmakers from the ruling coalition registered an impeachment motion with 21 charges against CJ Rana on 13 February, 2022 – automatically suspending him. A month later, the parliament formed an 11-member Impeachment Recommendation Committee to study the allegations against CJ Rana. However, the Speaker of the House delayed the impeachment proceedings for five months by not forwarding the motion to the Impeachment Recommendation Committee – which had summoned Rana on several occasions starting from 31 August, 2022.

On 17 September, 2022, the last day of parliament’s five-year term, the committee recommended the full house of parliament begin impeachment proceedings against CJ Rana, with the majority vote of six members who represented the ruling coalition. The remaining five members – who represented the opposition – wrote a note of dissent against the impeachment. In a cat-and-mouse fashion, Rana called the Supreme Court administration and stated that he would be rejoining the office. He argued that his impeachment motion ceased to be effective as parliament stood dissolved. Security guards seemingly obstructed him from leaving his residence after he made that call. CJ Rana and former Prime Minister KP Sharma Oli have even spoken to the media stating that the government has kept Rana under undeclared house arrest, a move that would be unconstitutional and unprecedented since Nepal’s peace process. However, there’s too much blood on the hands of those involved to decipher the moral and legal underpinnings of this turn-of-events.

For Chief Justice Rana, the latest brush with controversy is not new. Over the past several years, he has been accused of a number of ethical and professional breaches, including seeking appointments to constitutional bodies for individuals close to him, giving widely criticised verdicts, reducing sentences on dubious grounds, deliberately delaying important hearings, and engaging in ‘bench shopping’ (a term referring to the practice of assigning cases to favourable benches).

Judicial reforms will also require larger commitments from political parties, but such a commitment does not seem forthcoming or on the agenda for the next election.

In July 2021, Rana commissioned a committee led by sitting Supreme Court Justice Hari Krishna Karki, to identify the causes of corruption within the judiciary. The committee identified multiple problems in the system and leadership while also finding that CJ Rana’s prerogative under Supreme Court Regulations to assign cases to the justices led to bench shopping and irregularities in the Supreme Court. The committee discovered third-party influence in the court’s administrative affairs such as judges’ selection and found that in some cases, justices were acting as brokers. Further, the committee even found Rana’s role in the Constitutional Council and Constitutional Bench to be problematic when it comes to the management of cases that CJ’s leadership failed to address.

Many believe that political appointments in the judiciary after 2007 – especially in the Supreme Court – have also led to this situation. The constitution provides that most members of the Constitutional Council and Judicial Council – bodies to recommend the names of judges and justices for their appointment – are from political backgrounds de facto representing their political parties’ interests, and previous constitutions also had similar provisions. With such a structure in place, parties have easy leverage on judicial activities, triggering political entanglement in the judiciary.

Despite the conspicuous nature of CJ Rana’s offenses, the parliament and the ruling coalition were largely reluctant to bring forth the impeachment motion because their own prime minister is complicit in the scandal. CJ Rana’s parliamentary trial started after a long delay as the ruling coalition was not keen to face an accomplice in a public trial. Rana claimed that the ruling party only registered the motion because he was going to decline their directives in several ongoing cases. One of those cases concerning a splinter party in the ruling coalition could have toppled the government. The Communist Party of Nepal CPN (Unified Socialist), which helped in forming the ruling coalition after splitting from the largest opposition party, faced a case concerning the validity of its registration at the Supreme Court. On multiple occasions, those who sought CJ’s resignation and impeachment had to request the speaker of the parliament, the prime minister and coalition leaders, reminding them of their constitutional duty to initiate impeachment proceedings.

Interestingly, the opposition party, which was ousted from the government by a Supreme Court decision, has always been reluctant to support the impeachment motion and would have probably voted against impeachment even if the motion had gone to the parliament’s full house for voting. During his reign, the opposition party leader KP Sharma Oli was also alleged to have been involved in a bargaining scheme with the Chief Justice for constitutional appointment to his allies.

All the political parties were circumspect about resolving the crisis in Nepal’s apex court before the impeachment was registered. Even then, the ruling parties were intent on dragging the impeachment to the point when either the Chief Justice resigned, or his tenure was completed. The executive and legislative seem to have been complicit in the whole turmoil, and they refrained from playing a proactive role – even letting the court be dragged in.

The committee discovered third-party influence in the court’s administrative affairs such as judges’ selection, and found that in some cases, justices were acting as brokers.

Many have started arguing for a judicial overhaul, expressing that it is the only solution to address systemic problems, especially after Rana’s statements to the Impeachment Recommendation Committee alleging individuals both inside and outside the judiciary. In his hearings, defending himself, Rana has also personally levelled allegations against other Supreme Court justices and NBA officials for misconduct. He has also publicly named leaders of coalition and opposition parties, key politicians and individuals, accusing them of political negotiations with the judiciary. Such statements created a huge buzz in Nepal’s judicial and executive branches. These could potentially bring new controversial issues, indicating that there are bigger problems in Nepal’s judiciary which the executive has been a part of.

During the beginning of the controversy, the coalition parties and the opposition maintained that the Supreme Court should resolve the matter internally but later started capitalising on the judicial crisis to their own advantage. Coalition party leaders’ effort to impeach the Chief Justice, despite the certainty of its failure without the opposition’s support, is believed to have been made to restrict CJ Rana’s return to the Supreme Court. That would be consequential to the coalition and its leaders who face ongoing cases at the Supreme Court, and also to set it as a political agenda for the upcoming November elections. Since the impeachment proceedings were deliberately pushed towards parliament’s end of term, all efforts proved to be a paper tiger.

Current controversies have brought Nepali lawyers, current and former justices, and civil society together in seeking CJ’s resignation or impeachment, along with larger demands for judicial reform. In many ways, the Nepal judiciary’s crisis mimics that of India, where four senior Supreme Court justices came out to the media against Chief Justice Dipak Misra in January 2018, which they termed as a step to “protect the institution”. Akin to Nepal, this decision on the part of four judges seems to have been triggered by the controversy of assigning a case. The specific case was regarding the death of Justice Brijgopal Harkishan Loya, who had been overseeing a case that implicated Amit Shah, the current Home Minister of India. There too, the principles of independent judiciary and separation of power seem to have been breached under the auspices of an overreaching executive.

Despite the lottery system’s introduction, other instances of corruption and irregularities in the judiciary continue.

Unlike India, however, a partial reform of the judiciary was achieved. The judicial administration amended Supreme Court regulations, introducing a lottery system to assign cases to the justices in early December 2021 for the very first time. This will limit the Chief Justice’s prerogative. Supreme Court justices started hearing cases after this reform was put in place. Subsequently, the full-court meeting of the Supreme Court also decided to introduce a similar system in other courts in mid-January. This was possible due to pressures from the NBA and current and retired justices of the Supreme Court. Despite the lottery system’s introduction, other instances of corruption and irregularities in the judiciary continue. Proceedings in criminal cases are extremely slow and cases against the powerful and influential continue to be postponed owing to backlogs, or, at times, without plausible reasons.

Investigations and impeachment proceedings over the allegations against Rana were necessary, but it is unlikely to take effect. The tenure of the House of Representatives was completed on 17 September, but the impeachment proceedings were not. The parliament’s Impeachment Committee has recommended that proceedings be continued in the new parliament that will come into office after the federal elections on 20 November. However, there’s been no precedent of this kind of impeachment hearing and nor does the constitution explicate such a situation; it is another matter that the outcome of the elections and the willingness of those coming into office to pursue the matter are under a cloud of uncertainty.

The executive, legislature, those within the judiciary, political parties, and civil society should understand that Rana’s impeachment will not automatically free the judiciary from its problems. Judicial reforms will also require larger commitments from political parties, but such a commitment does not seem forthcoming or on the agenda for the next election. At present, it is unclear from which avenue judicial reforms will be implemented to restore the public’s faith in the judiciary. In such a circumstance, the spectre of institutional decay hangs over Nepal’s judiciary.

Alok Pokharel teaches at Chakrabarti Habi Education Academy, College of Law and researches constitutional law, federalism, and electoral governance. In the past, he has done research on Nepal's constitution-making processes and the constitution's implementation. He can be reached at pokharelalok23@gmail.com.