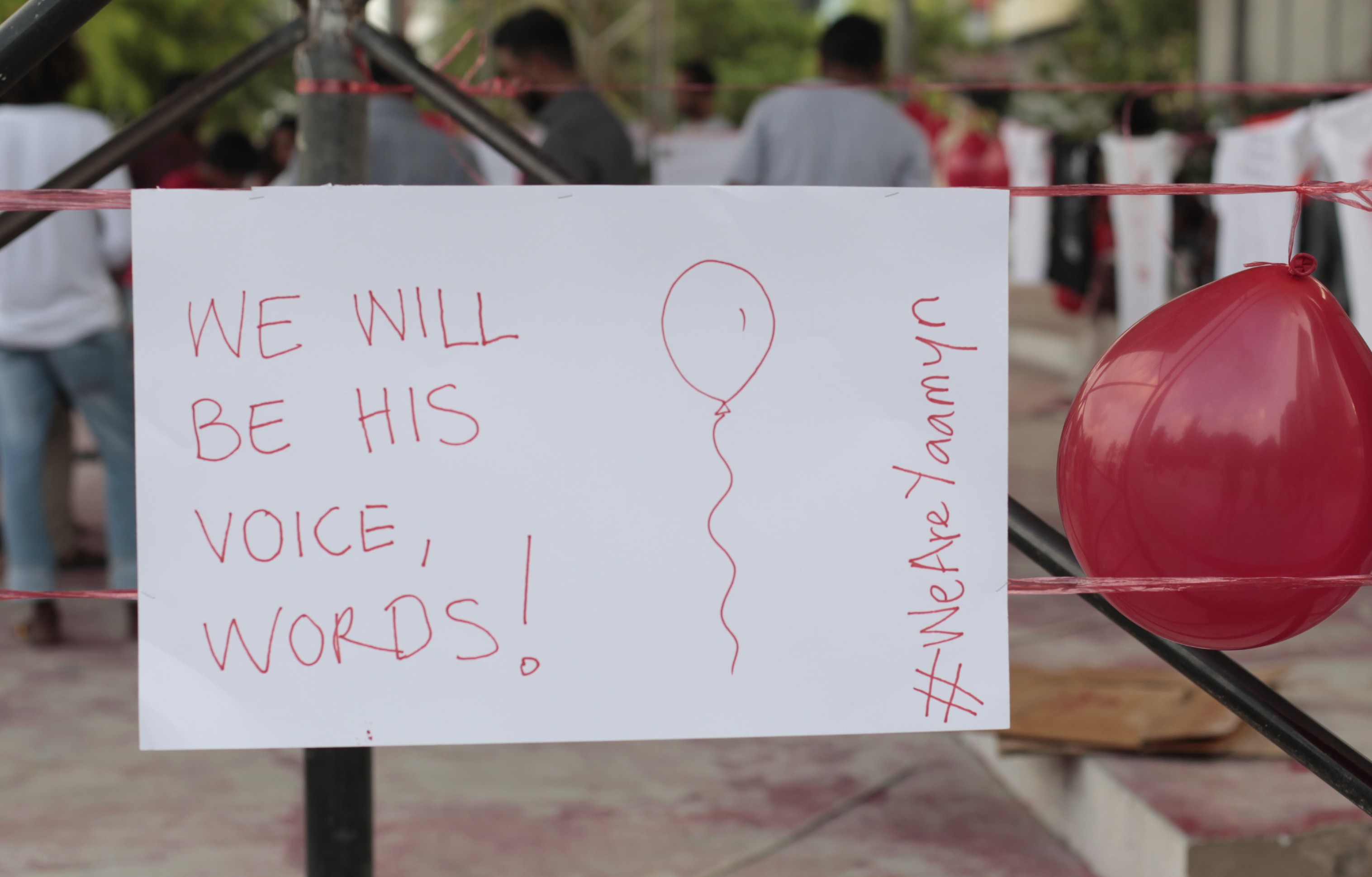 My younger brother, Yameen Rasheed, the writer, was killed shortly before dawn on Sunday, 23 April 2017. He was one of three siblings in a very close-knit family. His brilliance set him apart from a young age – he completed his GCE O Levels before turning 15. I used to look forward to reading his essays during his school days; his writing was remarkable even then. We always noticed that he did things differently compared to other school children. I remember one instance in middle school when we had to state a proverb and explain it; Yameen, unlike other students, explained the proverb through an elaborate story.

Yameen published informative blog posts on the ‘Daily Panic’ and ‘Slicker Than Your Average’. He had built a steady following on Twitter from people of all ages for sharing his thoughts. His writing centred around political, social and economic issues, including his views on religious extremism. He also questioned the targeting of young bloggers. The distinctively humorous and sarcastic tone of his work appealed to many in the Maldives.

However, Yameen also attracted hateful and violent rhetoric from religious hardliners and extremists. After he was labelled ‘anti-Islamic’ by such critics, he received death threats for over a year. He told me that he suspected his movements were being closely monitored from mid-2010. He knew this because he was shown a leaked case file on him and others maintained by the Maldives’ military intelligence. Yameen received direct death threats after reporting on a rally calling for more religious tolerance and freedom on international Human Rights Day in December 2011. Some Twitter users openly threatened him. Other threats were sent directly to his inbox on Facebook Messenger. He reported these threats to the police on two occasions when former President Abdulla Yameen was in power. The police did not ensure his safety, which resulted in his murder.

The killing of Yameen and our family’s subsequent experiences in seeking justice have exposed us to a systematic form of injustice.

Under the previous government’s regime, there were numerous hurdles to overcome in the investigation into his killing. A glaring flaw of the initial investigation was that those who bankrolled and ordered the murder were not exposed. However, we should also focus on what we could achieve under the previous government because the appetite for seeking justice for my brother has faded over time, especially with the fanfare following the 2018 presidential elections.

A few days after his murder, the police swiftly arrested a few alleged perpetrators. The previous government also initiated prosecution against six individuals. Aishath Bisham was the prosecutor general back then. For the past four years, the trial has been dragging on at the Criminal Court, with no end in sight. Not a single hearing was scheduled in 2020 (despite other trials held virtually amidst the pandemic). We repeatedly raised concerns regarding the delaying tactics used by the defence lawyers, but no action was taken against their attempts to derail the trial. There were times that they failed to appear in court on time or fell ill at the last minute.

The state, too, must be held responsible because Maldives Correctional Service failed to produce the defendants in court as scheduled. In the last hearing I attended, defence lawyers spent over two hours speaking of allegations of torture against the defendants. The judge and the prosecution seemed unable or unwilling to direct the discussion to the facts of the case at hand. It is noteworthy that one of the defence lawyers is Maumoon Hameed, the recently elected president of the newly established Bar Council of the Maldives. While allegations of torture should not be taken lightly and investigated thoroughly, there are avenues, norms, and procedures to process such allegations. Further delay was incurred due to the separate proceedings that were initiated to hear the allegation of the defendants.

What could be more serious than the extrajudicial killing of a prominent young voice?

On 3 May 2017, the family submitted a case to the Civil Court, accusing the police of negligence to investigate the threats against him effectively. In September that year, the Civil Court judge, Abdul Nasir Shafeeq, refused to hear the case citing lack of jurisdiction. Through our lawyers, we then submitted a case to the High Court on 2 October 2017. The lawyers who represented the family are now in different positions at the Supreme Court, Judicial Service Commission, and various government tribunals. There has been no communication with the family since then. The NGO that helped the family was illegally de-registered. Other activists have now taken ‘an oath of silence’ after receiving official status through government positions.

If we go back a bit further, President Ibrahim Mohamed Solih pledged to obtain justice for both Yameen and his friend Ahmed Rilwan, who went missing in 2014. As soon as the Solih government was formed in November 2018, it set up the Deaths and Disappearances Commission (DDCom) through a decree (later empowered by law). Back then, the former president of the DDCom, Husnu Al Suood, told us that the case would be investigated and completed in two years. Nevertheless, when 2021 began, the former chair also resigned to assume a new position at the Supreme Court. Our family was told that DDCom has not even begun its investigation into Yameen’s killing. The reason we were given was that it could interfere with the ongoing murder trial at the Criminal Court and that it could be burdensome for the state prosecutors. My brother’s murder has come full circle. The Criminal Court’s excuse for the delays was that the defence lawyers had submitted another case (related to Yameen’s) to the Supreme Court concurrently.

The appetite for seeking justice for my brother has faded over time, especially with the fanfare following the 2018 presidential elections.

It has been three years since the DDCom was established. Nothing has changed. I am sceptical over reassurances of possible leads because I do not see any developments in the case. Today, we have additional expertise on the case through international assistance. The legal experts’ work has gone on for half a year. Whether or not there is hope through that avenue is yet to be seen.

It is important to highlight that Rilwan’s alleged abductors were acquitted due to prosecutorial failures, as noted by the presiding judge in the 2018 verdict. I fear the same fate for my brother as I have witnessed first-hand how state prosecutors forget to bring important documents to the court and forget important dates concerning the case. One recent example of state incompetence involved showing the CCTV footage in the courtroom n. When I was at the trial, I saw that defence lawyers objected to this, saying the period for submitting evidence had elapsed. Meanwhile, the prosecutors maintained that the court had allowed it at an earlier date but could not substantiate it by producing the necessary documents. It is also worth noting that, as the hearing has unfolded over the years, the judge presiding over the case has been changed twice. As family members, it is difficult for us to witness prosecutorial failures of adjourning the trial to find the relevant documents and court orders. While I am sadly aware that I will never get my brother back, performing state responsibilities with integrity is the least that I expected.

The state, too, must be held responsible because Maldives Correctional Service failed to produce the defendants in court as scheduled.

At times, when faced with questions, the prosecution appeared incompetent, lacking in confidence and composure as they speak in court. For this reason, on 9 February this year, I sent a letter to the current Prosecutor General, Hussein Shameem, asking him to appear in court as the lead prosecutor in the case. I made this request because I saw that he had announced that he would appear in court for ‘serious’ criminal cases. What could be more serious than the extrajudicial killing of a prominent young voice? As of this writing, there has been no response to the request. Meanwhile, while a hearing was held for the murder trial in February 2021, the case continues to move very slowly.

The killing of Yameen and our family’s subsequent experiences in seeking justice have exposed us to a systematic form of injustice. The family’s efforts were not a ruse to win votes or to help bring certain influential individuals into power. I no longer believe the Maldivian state is willing to provide justice for my beloved brother, who was violently taken away from us.

I want to thank Mushfiq Mohamed and Shahindha Ismail for their assistance in drafting and translating this article. The Dhivehi version was published on Adhadhu on 24 April 2021.

Aisha Rasheed is blogger Yameen Rasheed’s sister. She was formerly a forensics expert at the Maldives Police Service from 2008 until 2017. She lives in Male’ with her son.