Skip to content
Pakistan > Notes from a ‘hybrid regime’ 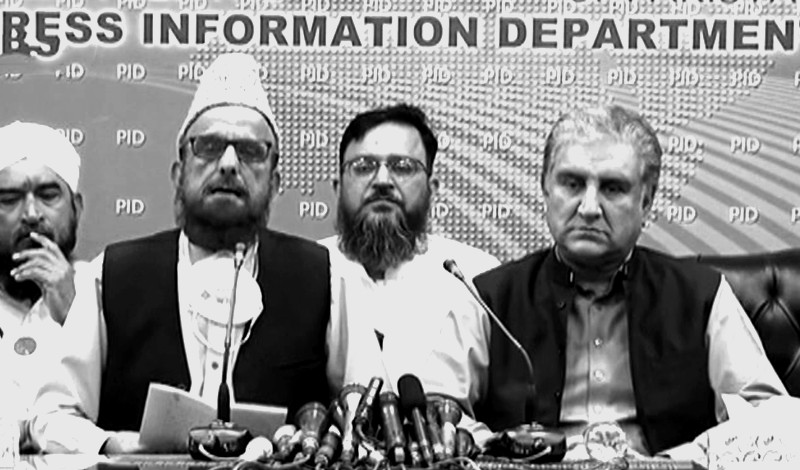 Today Pakistan is in the grip of extreme political and social suffocation, which can only be understood as a silent martial law. Journalists are abducted, powerful television channels are censored, political parties are crushed and activists are hounded. The silencing of dissent intensified with the rise of Imran Khan, itself one of the most manufactured mandates in recent history. Since he assumed power, the process of authoritarianism has only accelerated, with more curbs on the media, a clampdown on academia reminiscent of the Zia era, and a pervasive climate of fear and paranoia across the country.

This cruel status quo is widely dubbed a “hybrid regime”. The rules are consistent with a number of similar formations from our beleaguered past. A weak prime minister was brought to power with support of the entrenched military establishment. The PM has the capacity to attack civilian political opponents but is not permitted to utter a word on the corruption or misuse of power by the commanding Generals. An example is the recent case involving General Asim Bajwa, who secretly ran an empire of Papa John’s restaurants across the US. Despite the uproar by opposition parties, the matter was swiftly buried and the General was retained as the head of the China Pakistan Economic Corridor, a $67 billion project involving multiple investments. Any mortal charged with massive fraud would have been deemed unworthy of leading such a project, but the “sanctity” of the military means that the generals are granted endless concessions.

We must remember that ideology veils itself through the language of neutrality and objectivity. Its aim is to create a point of fixation for the public that prevents them from deciphering the situation in its entirety. Ideology has the role of manipulating the genuine sentiments of the public in the service of the ruling order. Other than the cynical use of Islam, the phrase “corrupt politicians” is an ideological instrument used by the ruling system to veil the structure within which this corruption is embedded, foreclosing the possibilities of a genuine political debate. One of the aims of this book is to widen the ambit of discussion by focusing on the systemic exploitation, gangsterism, militarism, extremism and lawlessness that shapes our political economy, locating “corrupt politicians” as symptoms of a dangerous disease.

While increasing paranoia of the “hybrid regime” unleashes violent repression by the coercive state apparatus, the state is also intensifying its focus on controlling the thoughts of its citizenry.

Perhaps the most vivid and disturbing example of the ruling system’s logic can be seen in the province of Balochistan that is under the control of the military, its economy asphyxiated by relentless exploitation and its political life haunted by increasing cases of enforced abductions. Similarly, former FATA remains a theater of direct and proxy wars, perpetually destabilizing society and uprooting hundreds of thousands of Pashtuns from their homelands. To make matters worse, Pakistani elites and ordinary people inhabit different worlds, with the former living in gated communities cut off from the rest of Pakistan. This spiritually bankrupt and financially corrupt system is maintained by excessive policing of the general population, inscribing militarization onto the material infrastructures of our everyday life. This spatial apartheid and excessive violence against dissenting forces points to a dystopian future.

What is evident to any keen observer is that Pakistan is not ruled in a manner consistent with existing theoretical frameworks. There is no separation of institutions, policy-making depends on the whims of powerful men and activists are targeted with a vengeance more suited to 18th century feudal lords than to a modern state. The general tendency today is to view dissidents as enemies, extracting them from the national political community and permitting unrestrained acts of cruelty upon them. The country is becoming ungovernable, prompting the ruling classes to crush any real or imagined opposition while tightening their hold on power.

These issues require more than two minute sound-bites that mark our censored media landscape. Yet, such discussion is repressed by positing an impoverished definition of corruption that masks rather than reveals the actual decay in society.

While increasing paranoia of the “hybrid regime” unleashes violent repression by the coercive state apparatus, the state is also intensifying its focus on controlling the thoughts of its citizenry. The urgency of this project can be gauged by the fact that state officials term dissenting views as “fifth generation warfare”, a form of war that allegedly aims to overwhelm the enemy through propaganda by fifth columnists. It follows that those criticizing policies are working on a hostile agenda controlled by external enemies of Pakistan, and hence do not represent a legitimate opinion. Increasingly, all opinions that differ from those in power are being brought into this category, signaling further erosion of debate and dialogue in an already suffocated society.

It appears that the ruling classes have read about Althusser’s thesis that the class struggle must be perpetually fought in the realm of ideas. The state has imposed a singular narrative about our past and present, obliterating ethnic and religious identities that do not conform to the official narrative. On the other hand, it has also launched a concerted effort to prevent citizens from imagining alternative trajectories for being and belonging. One of the key methods of winning the battle of ideas is by robbing the public of its own past, particularly from the traditions of resistance that sustain ideas of freedom and justice. The aim is to completely disorient the youth so that they are overwhelmed by fear and uncertainty, compelling them to seek protection from the state itself.

As mentioned earlier, the manner in which the word “corruption” is used in public discourse is emblematic of the intellectual decay in society. The word has been used historically to attack civilian governments by pointing out the financial corruption of their leaders. While there is no doubt that elected leaders have made fortunes enriching themselves from the public exchequer, this criticism is almost never extended to the country’s powerful military despite its own massive financial empire. Instead, the military has the de facto power of selectively nominating those who are corrupt and those deemed patriotic, overseeing a revolving door in which civilian leaders continue to be manufactured and discarded. Yet, the basic infrastructure of power remains intact, with all its cruelty and exploitation.

A penchant for violence has replaced sober analysis of Pakistan’s contemporary crisis, let alone debate on ways out of it.

The bigger tragedy is that the fixation on individual corruption prevents us from identifying, let alone debating, the different mechanisms through which the ordinary Pakistanis are exploited. There is hardly any discussion on the direction of the country’s economy, which is run by an exclusive group of technocrats inspired by the neoliberal Washington Consensus and who occupy key decision-making positions in every government. Similarly, the intensifying climate crisis, the horrifying femicide against Pakistani women and the deepening identity crisis faced by the youth hardly registers in mainstream political discourse. Therefore, corruption is indeed a problem in Pakistan, but not only in the limited sense of financial embezzlement by civilian leaders. Corruption also includes the monopoly of a few civilian and military elites over the country’s resources, replacing constitutionalism with gangsterism, rigging elections and overthrowing governments, using religion for cynical purposes, and deploying brutal violence against dissenting voices.

These issues require more than two minute sound-bites that mark our censored media landscape. Yet, such discussion is repressed by positing an impoverished definition of corruption that masks rather than reveals the actual decay in society. By limiting the ambit of discussion, the ruling elites conveniently keep the public’s focus on manufactured enemies whose elimination appears as a possible solution to the country’s woes. When repression fails to instill genuine change (like addressing the pathetic state of the economy), the absence of alternative discourse means that failure is taken as a sign that we have been too lenient. “Kill them!” “Hang them publicly!” These are the cries of an agitated public that is right to be indignant but is not allowed to think beyond the insular frameworks provided by those in power.

When repression fails to instill genuine change (like addressing the pathetic state of the economy), the absence of alternative discourse means that failure is taken as a sign that we have been too lenient.

A penchant for violence has replaced sober analysis of Pakistan’s contemporary crisis, let alone debate on ways out of it. If we are in the midst of a war of ideas, our rulers have successfully managed to disarm the people by policing their thoughts through fear and manipulation. The perpetual creation of phantoms and fictions means that people are compelled to see only symptoms of the crisis, whereas the real processes driving these changes remain invisible to the public eye. The history of grassroots resistance is either suppressed or is disarticulated from its context to show that people were naïve to join the democratic movement, fueling further cynicism. The result is that despite experiencing terror in our everyday lives, we are unable to even theorize our experiences, let alone prepare to transform the systems that structure our lives.

~ Excerpted with permission from Rule by Fear: Eight Theses on Authoritarianism in Pakistan by Ammar Ali Jan. Folio Books (November 2021)

Ammar Ali Jan is an activist and historian who works on Communist thought in the non-European world. He is a member of the Haqooq-e-Khalq Movement.