Skip to content
Analysis > Nuclear dangers of the naval kind

Nuclear dangers of the naval kind

Southasia needs to pay attention to the increased risk of a nuclearised ocean. 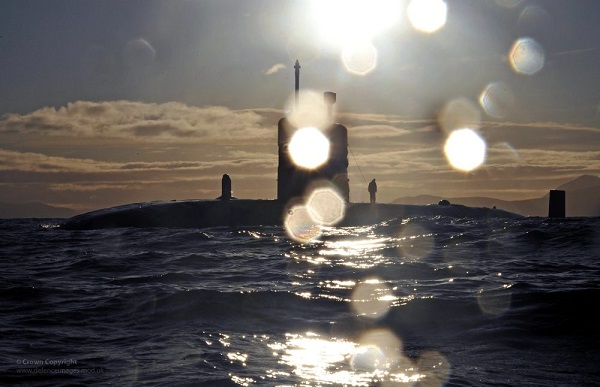 In 2019, a new set of nuclear dangers emerged for Southasia. The growing danger was underscored during the military crisis between India and Pakistan in February 2019, when India put one or more of its nuclear submarines on “operational deployment mode.” During the crisis, the Pakistani Navy claimed to intercept an Indian submarine. No one has confirmed if this interception involved an Indian submarine carrying nuclear weapons. With India and Pakistan on an accelerated programme of acquiring and developing nuclear submarines, Southasia needs to pay urgent attention to the risks of nuclear accidents at sea.

India and Pakistan have been acquiring and developing nuclear submarines ­– those that are armed with nuclear weapons but powered by diesel as well as those that are armed with nuclear weapons and powered by nuclear reactors. With the advent of these underwater nuclear platforms comes the risk of nuclear incidents and accidents at sea. There has been a long history of such accidents around the world. In July of this year a Russian nuclear-powered submarine accident killed 14 crew members.

The expansion of nuclear operations to the sea also raises issues about who has the ability to authorise the use of these weapons, especially in a crisis. This is of particular concern in the case of India because it has already deployed such weapons. According to a November 2018 announcement by Prime Minister Narendra Modi, the Arihant nuclear-powered submarine successfully completed its maiden “patrol”.

The introduction of nuclear armed submarines, whether diesel or nuclear-fuelled, increases the likelihood of conventional conflicts escalating to a nuclear one.

A further source of concern is the August 2019 announcement by India’s defence minister to the effect that the country’s ‘No First Use’ (NFU) policy – which pledges not to attack with nuclear weapon unless attacked first – “would depend on the circumstances.” His comments, made during a period of increased tension between India and Pakistan following the amendment to Article 370 of India’s Constitution conferring special status to Jammu & Kashmir, underscore these risks.

India’s submarine programme dates back to 1967, when the country acquired its first submarine from the Soviet Union. In 1968 the Indian Navy initiated a programme for training select groups of naval engineers in nuclear science. By 1976, a team of naval engineers were assigned to the Department of Atomic Energy’s Bhabha Atomic Research Center to work on nuclear propulsion options and in 1981 India entered into an agreement with the Soviet Union for assistance in developing naval nuclear propulsion. But further progress was slow and it was only in 2003 that the first land-based submarine nuclear reactor prototype went critical. The first nuclear submarine to be designed and built in India, the Arihant, was launched in July 2009 and seems to have become operationally deployed, as mentioned earlier, in 2018.

At that time, a second nuclear submarine capable of carrying ballistic missiles was reported as having completed sea trials. The launch of more vessels is planned, and “final design work” has started on the follow-on generation of ballistic missile submarines. Arihant is designed to carry up to 12 B05 ballistic missiles (also known as the K-15) able to reach a distance of around 700 kilometers and to be armed with one nuclear warhead each. Longer range submarine-launched ballistic missiles (SLBM) for the Arihant and other submarines are under development.

Along with its domestically manufactured nuclear submarines, the Indian Navy has leased three nuclear-powered attack submarines from Russia. These submarines do not carry nuclear weapons, but can be used to accompany nuclear-powered, nuclear-weapon-carrying submarines like Arihant.

Almost all the countries operating nuclear-powered or nuclear-armed submarines have experienced accidents, often with significant loss of life and the spread of radioactivity in the environment.

India appears to be developing its naval capabilities in part due to a long-standing desire to demonstrate nuclear-arsenal capacity associated with states seen as great powers (for instance, the United States, Russia, Britain, France and China). Strategic competition with China in the Indian Ocean may be another factor.  Serving and retired members of India’s Navy publicly express concerns about the deployment of Chinese submarines, warships and tankers in the Indian Ocean.

India’s growing arsenal also makes it a more valuable ally for the United States in its efforts to deal with the growth in China’s political and military power. For some time now, the US and India have been conducting joint naval exercises.

Pakistan, for its part, announced the setting up of a Naval Strategic Force Command in 2012. Pakistan’s Navy has started preparing to put nuclear-armed cruise missiles on conventional submarines. The cruise missile is expected to be the 450-kilometer range Babur, which had a successful underwater test launch in 2018. There are reports that Pakistan is seeking to develop or acquire a nuclear-powered submarine.

In 2016, Pakistan signed a deal with China to purchase eight modified diesel-electric attack submarines; four of these will be built by China in the Karachi shipyard, and are expected to be completed between 2023 and 2028. As part of the deal, China will also transfer submarine construction technology to Pakistan. It has been suggested by a retired Navy official that Pakistan seek an arrangement with China for the training of a pool of Navy officers to operate nuclear-powered and eventually nuclear-armed ballistic missile submarines.

Almost all the countries operating nuclear-powered or nuclear-armed submarines have experienced accidents, often with significant loss of life and the spread of radioactivity in the environment. There have been over 40 accidents involving nuclear-powered submarines, claiming a total of over 650 lives. Of these accidents, more than half involved Soviet/Russian submarines resulting in over 400 deaths. The United States comes next, with at least a dozen submarine accidents leading to well over 200 deaths.

Two accidents have involved India’s nuclear submarines. A January 2018 news report stated that India’s first domestically built nuclear-powered submarine, INS Arihant, had been taken out of service over ten months earlier after an accident while in port. The rear-side hatch was “left open by mistake” while the submarine was in harbour. This reportedly led to water entering and damaging Arihant’s propulsion compartment. This report has since been called into question by a defence expert, who pointed to various technical inconsistencies between this report and what is known about the design of INS Arihant. There has also been an accident involving the INS Chakra that is leased from Russia.

It would be unreasonable to expect that no more accidents involving nuclear submarines would ever take place. Nuclear submarines involve many technologies that are susceptible to a range of accidents affecting the submarine, nuclear reactor, missiles and nuclear weapons. All of these are operating under challenging conditions: deep under water, with limited supplies of air and water, possibly under attack. None of these factors is likely to change.

With India and Pakistan on an accelerated programme of acquiring and developing nuclear submarines, Southasia needs to pay urgent attention to the risks of nuclear accidents at sea.

Should a naval nuclear-reactor accident occur, especially at or near a naval base, coastal city or town the consequences could extend far beyond the vessel and its crew. An accident involving a nuclear-powered submarine at or close to the new naval base in Rambilli, in which the nuclear-reactor core released around 1 quadrillion Becquerels of Cesium-137, the likely inventory if the fuel is fully irradiated, could result in roughly a thousand cases of cancer in excess of the normal background rate, with almost 500 of these cases being fatal according to our calculations.

In a military crisis, nuclear armed submarines increase the potential for nuclear war because they open up new risk pathways. The Australian strategist Desmond Ball pointed out in 1985 that “the sea is the only area where nuclear weapon platforms [of adversary states] … actually come into physical contact” and this contact can lead to accidents from several kinds of what seem to be typical naval operations.

There have already been incidents of Indian and Pakistani naval platforms coming into physical contact, for example in 2011, when the Pakistani vessel PNS Babur brushed past India’s INS Godavari. Contact between Navy forces from India and Pakistan might also result from deliberate attempts to attack submarines. Both countries are known to be acquiring anti-submarine warfare capabilities.The consequences of such events could be worse if submarines come into contact with each other during periods of heightened tensions or crises.

A significant new challenge resulting from the deployment of nuclear weapons at sea is managing command and control. To the extent that such things are publicly known, India and Pakistan were believed to keep their nuclear weapons on land separate from the delivery vehicles, be they missiles or aircraft. This separation makes it harder for the weapons to be used without proper authorisation. With submarines armed with nuclear weapons at sea, this separation may not be possible and so the risk of unauthorised use is greater.

The expansion of nuclear operations to the sea…raises issues about who has the ability to authorise the use of these weapons, especially in a crisis.

At the same time, one purpose of the nuclear-armed submarine is to be a final fail-safe means of nuclear attack even if a country’s political leadership is killed and its cities destroyed. To serve this role, the nuclear weapons on the submarine cannot rely on timely launch orders from political authorities. A further problem for submarines is that they are supposed to remain hidden from the enemy. Constant communication from the submarine to the military or civilian leadership may make it easier to detect. All of this means that during the time of a crisis, the personnel in a nuclear submarine might be the ones making decisions on whether or not to use nuclear weapons.

Southasians need to consider how they feel about trusting their lives in some future crisis to the restraint of Indian or Pakistani submariners far from home and fearful that their vessel is under attack, trying to decide about launching their nuclear missiles in a ‘use them or lose them’ scenario. The consequences would be devastating.

Zia Mian is co-director of Princeton University’s Program on Science and Global Security, where he also directs the Project on Peace and Security in South Asia. M V Ramana is the Simons Chair in Disarmament, Global and Human Security at the Liu Institute for Global Issues in the School of Public Policy and Global Affairs at the University of British Columbia in Vancouver, Canada. Abdul H Nayyar is a physicist and a founder and former President of the Pakistan Peace Coalition, a national network of peace and justice groups.