On the psychopathology of the nuclear-arms race. 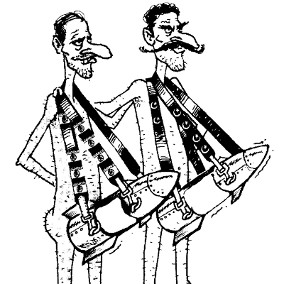 Nuclearism is the ideology of nuclear weaponry and nuclear arms-based security. It is the most depraved, shameless, and costly pornography of our times. Such an ideology cannot be judged only by the canons of international relations, geopolitics, political sociology, or ethics. It is also a well-known, identifiable, psychopathological syndrome. The following is a brief introduction to its clinical picture, epidemiology, and prognosis.

Nuclearism does not reside in institutions, though it may set up, symbolise, or find expression in social and political institutions. It is an individual pathology and has clear identifiers. Many years ago, Brian Isley argued in his book, Fathering the Unthinkable, that nuclearism went with strong masculinity strivings. Isley was no psychologist, but the works of Carol Cohn’s and others have endorsed the broad contours of Isley’s analysis. They show that not only the language and ideology, but the entire culture of nuclear weaponry is infiltrated by hard, masculine imageries and those participating in that culture usually suffer from deep fears of emasculation or impotency. Indeed, that is the reason they participate in that culture with enthusiasm.

Such masculinity strivings or drive for potency usually goes with various forms of authoritarianism. Even people ideologically committed to democratic governance may vicariously participate in subtler forms of authoritarianism associated with nuclearism. There is support for this relationship outside psychology, too. Robert Jungk’s work on the nuclear state shows that secrecy, security, surveillance, and police state methods invariably accompany the nuclear establishment in every country. In that sense, the culture of nuclearism is one of the true “universals” of our time. Like Coca-Cola and blue jeans, it does not permit cultural adaptation or edited versions. It is the same in Paris and Pokhran, Lahore and Los Alamos.

Nuclearism is framed by the genocidal mentality. Eric Markusen and Robert J. Lifton have systematically studied the links. In their book, The Genocidal Mentality, Markusen and Lifton make a comparative study of the psychology of mass murderers, in Nazi Germany, in Hiroshima and Nagasaki, and among the ideologues of nuclearism today and find remarkable continuities.

In the genocidal person there is, first of all, a state of mind called “psychic numbing” – a “diminished capacity or inclination to feel – and a general sense of meaninglessness”. One so numbs one’s sensitivities that normal emotions and moral considerations cannot penetrate one any more. Numbing “closes off” a person and leads to a “constriction of self process”. To him or her, the death or the possibility of the death of millions begins to look like an abstract, bureaucratic detail, involving the calculation of military gains or losses, geopolitics or mere statistics. Such numbing can be considered to be the final culmination of the separation of affect and cognition –that is, feelings and thinking – that the European Enlightenment sanctioned and celebrated as the first step towards greater objectivity and scientific rationality.

The genocidal mentality also tends to create an area protected from public responsibility or democratic accountability. Usually such responsibility is avoided by re-conceptualising oneself as only a cog in the wheel, advancing one’s own bureaucratic or scientific career like everybody else, by taking and obeying orders from superior authorities faithfully, mechanically, and without thinking about the moral implications of the orders. The Nazi war criminals tried at Nuremberg at the end of World War II all ventured the defence that they were under orders to kill innocent people, including women, children and the elderly, and could do nothing about it.

The other way of avoiding accountability is to remove it from individuals and vest it in institutions and aggregates. As if institutions by themselves could run a death machine without the intervention of individuals! After a while, even terms like the military-industrial complex, fascism, imperialism, Stalinism, ruling class, or American hegemony become ways of freeing the actual, real-life persons from their culpability for recommending, ordering, or committing mass murders. In a society where genocidal mentality spreads, intellectuals also find such impersonal analyses soothing; they contribute to the creation of a business-as-usual ambience in which institutions are ritually blamed and the psychopathic scientists, bureaucrats and politicians who work towards genocides move around scotfree.

In acute cases, the genocidal mentality turns into necrophilia, a clinical state in which the patient is in love with death. Indeed, he or she wants to sleep with the dead, in fantasy and, in extreme cases, in life. Saadat Hassan Manto’s famous story, “Cold Meat” or “Thanda Gosht” is, unknown to the author, the story of an ‘ordinary’ murderer and rapist who, while trying to satiate his sexual greed during a communal conflict, confronts his own with necrophilia and is devastated by that. Those interested in more authoritative case studies can look up Erich Fromm’s The Anatomy of Human Destructiveness.

Nuclearism does not remain confined to the nuclear establishment or the nuclear community. It introduces other psychopathologies in a society. For instance, as it seeps into public consciousness, it creates a new awareness of the transience of life. It forces people to live with the constant fear that, one day, a sudden war or accident might kill not only them, but also their children and grandchildren, and everybody they love. This awareness gradually creates a sense of the hollowness of life. For many, life is denuded of substantive meaning. The psychological numbing I have mentioned completes the picture. While the ordinary citizen leads an apparently normal life, he or she is constantly aware of the transience of such life and the risk of mega-death for the entire society. Often this finds expression in unnecessary or inexplicable violence in social life or in a more general, high state of anxiety and a variety of psychosomatic ailments. In other words, nuclearism begins to brutalise ordinary people and vitiates everyday life.

Studies by the likes of William Beardslee, J.E. Mach and Eleonora Masini show that these traits express themselves even in adolescents and children. Even children barely eight or 10 years old begin to live in what they consider to be a world without a future; they are fearful and anxious about their life, but unable to express that fear and anxiety directly, because in a nuclearised society the fear of nuclear death is made to look like an abnormal psychoneurotic state.

Many neurotics and psychotics at first look like charming eccentrics. To start with, nuclearism may appear a smart game and the partisans of nuclear weaponry may look like normal politicians, scholars, or defence experts. After all, the Nazi killers, too, were usually loving fathers, connoisseurs of good music, and honest citizens. However, beneath the facade lies a personality that is insecure, doubtful about one’s masculinity, fearful of the interpersonal world, and unable to love. The mindless violence such a personality anticipates or plans is a pathetic attempt to fight these inner feelings of emptiness, and the suspicion and the fear that one’s moral self might already be dead within. You father the unthinkable because you have already psychologically orphaned yourself. You make contingency plans to kill millions because you fear that your innermost core has already been cauterised against all normal feelings and human relations. Acquiring the power to inflict death on millions, and by living with the fantasy of that power, you pathetically try to get some confirmation that you are still alive. However, that confirmation never comes. For in the process of acquiring that power, you may not be dead physically, but you are already dead morally, socially and psychologically.