Oil in the eyes 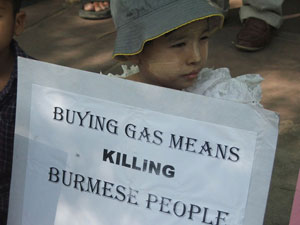 Even as Southasia’s energy-strapped, fast-growing economies have led many to wonder whether antagonistic neighbours may be pushed together into forced cooperation, on the eastern edge of the region a less optimistic dynamic is playing out. Indeed, the huge natural-gas reserves of Burma have caused many Asian governments to turn a blind eye to Rangoon’s continued oppressive and non-democratic tactics.

Burma stands on the world’s tenth largest natural-gas reserves, estimated at more than 90 trillion cubic feet (tcf) in 19 on-shore and three major offshore fields. As the economies of South, Southeast and East Asia have soared upwards in recent years, the Shwe ‘gas block’ in western Burma’s Arakan state has instigated intense competition between India, China, South Korea, Thailand, Japan and Singapore. South Korea’s Daewoo International estimates that just two blocks from the Shwe gas field together have a reserve of about 20 tcf, equivalent to about 3.5 billion barrels of oil. There are currently four stakeholders in the Shwe Gas Project – Daewoo (which controls 60 percent), KOGAS of South Korea, and two Indian interests, the Oil and Natural Gas Corp (ONGC) and the Gas Authority of India Limited (GAIL).

India has outlined several options for importing gas from the Shwe field, including three land and three sea routes, besides transporting the product in liquefied or compressed states – LNG or CNG. New Delhi’s most preferred option would be to construct a pipeline through Bangladesh to West Bengal (see accompanying story, “Neighbourhood gas”). Intransigence in Dhaka, however, has led to the formation of several preconditions unacceptable to India: a reduction of the Indo-Bangladeshi trade deficit, transit for trade goods to and from Nepal and Bhutan, as well as a guarantee from India to import more Bangladeshi goods. India’s difficulty in changing Dhaka’s mind on the pipeline project has led to fraying tempers in Rangoon, where junta officials have urged India to look to alternative plans, including setting up electricity-generation projects near the gas fields.

In December 2005, the Indo-Bangladeshi standoff on the matter led Burmese officials to sign a memorandum of understanding with PetroChina, one of China’s largest privately owned companies and its second largest power generator. According to the agreement, by March 2006 PetroChina had completed a survey for a 2380 km pipeline from Kyakphu in Burma to China’s Yunnan province. As part of the deal, Burma’s military regime would have received a USD 84 million soft loan from Beijing. The pipeline would traverse central Burma’s ‘Dry Zone’, hosting over 25 percent of the country’s population, and home to some of the country’s most pressing humanitarian needs.

Meanwhile, in June 2006 GAIL announced that it had completed a feasibility study for laying a 1400 km-long pipeline, worth USD 1.3 billion, from Sittwe in Burma to Gaya in Bihar via Aizawl, Silchar, Guwahati, Tinsukia and Bengal. In return, the Export-Import Bank of India would extend a line of credit to Rangoon worth USD 20 million. This gasline would be constructed along the banks of the Kaladan River, where approximately one million people reside, 98 percent of whom lack electricity.

Oil for arms
In dealing with the evolving situation over Burmese petroleum, international oil firms have found themselves on the front lines, wrestling with issues of geopolitical significance and juggling new human-rights and environmental challenges. Weapons and military equipment purchases by the junta have increased substantially in recent years, as the generals have gained significant earnings from the sale of the country’s natural resources to the increasingly energy-hungry neighbours of Asia.

The December 2006 indictment in South Korea of 14 Daewoo officials illustrates just how close the relationship between arms deals and natural-gas concessions can be in Burma. In 2001, Daewoo International, Doosan Infracore and Daewoo Heavy Industries allegedly signed a contract worth nearly USD 134 million to provide technology and materials to Rangoon to help build an ammunition plant capable of producing tens of thousands of shells per year for a variety of weapons. From the Shwe Gas Project, Daewoo International is expecting to net profits of USD 86 million per year for two decades.

While China remains the prime dealer of military equipment to Burma, India is currently stepping up both military and energy deals with the junta. This past December, the international watchdog Human Rights Watch released a report critical of New Delhi’s proposed military assistance to Rangoon. At the same time, Burma’s Military Chief-of-Staff, General Thura Shwe Mann, was reportedly meeting with the leader of the Indian Army’s Eastern Command, Lieutenant-General Arvind Sharma, to discuss joint counter-insurgency training exercises. The meeting coincided with the announcement that India had signed a new deal to acquire exploration rights to Burma’s offshore gas fields. The Indian Ministry of Defence has confirmed that exporting weaponry to Burma is part of a strategy to establish closer links with the country’s military regime, in order to counter China’s growing influence in the area.

Burma remains one of the most repressive countries in Asia, despite promises for political reform and national reconciliation by its government, which continues to spend 40 percent of the country’s national budget on defence, and just five to ten percent on health and education. Burma’s military, the Tatmadaw, is Southeast Asia’s second largest conventional force, estimated at over 400,000 troops. The junta stands to profit by up to USD 17 billion dollars from the Shwe Gas Project over its lifespan, which could become the government’s single largest source of revenue – up to USD 825 million per year.

Aside from not being able to capitalise on this additional revenue, the construction of the Shwe gasline itself could have a dramatic and direct impact on many Burmese communities. Severe human-rights abuses and environmental negligence associated with the construction of pipelines has already been experienced in Burma. In the early 1990s, the Rangoon government partnered with the US company Unocal and France’s Total to construct the Yadana and Yetagun pipelines through southern Burma. This massive project had disastrous effects on local communities, leading to increased militarisation and systematic human-rights abuses by the Burmese military – including widespread forced labour, confiscated lands, forced relocation, and instances of rape, torture and extrajudicial killings in the pipeline area. As per information available at the time of writing, the Burmese military has already begun conscripting forced labourers to build military camps and roads near the proposed pipeline routes to India and China.

Meanwhile, in early January 2007, just days after China and Russia jointly blocked a proposal before the United Nations Security Council to censure Rangoon’s continued human-rights abuses, the Chinese government landed a new deal to further explore Burma’s petroleum resources. Negotiations between India and Burma over gas pricing are continuing, with an agreement expected by the middle of the year. Such is the desperation for Burmese natural gas in India, and such a fear of growing Chinese influence on Burma, that human-rights issues will cut much ice in New Delhi – particularly if the Indian civil society continues to keep mum.

~ Kim is a student activist and member of the All Burma Students League, based in India, and the fouder of the Shwe Gas Movement, India.