Young women are at the forefront of Kabul's modern art. 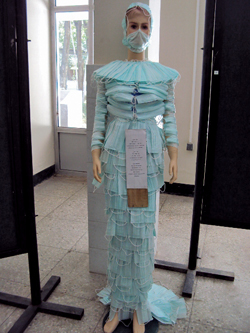 Under the watchful eye of a male instructor, a teenage boy is deep in concentration, trying to render and copy from a postcard as accurately as possible. This has been the art scene in Afghanistan for years: stale and exclusive to males. And, whether in the fine-arts faculties of Kabul and Herat universities or in the handful of private centres around the country, realism has long ruled as the only accepted style; the degree of precision in copying a picture, or occasionally a live model, has been the yardstick with which to judge artists. Now, however, the tide seems to be turning.

A few months ago, two spacious auditoriums in Kabul University hosted a weeklong exhibition. A range of mediums, including photography, installation, collage, video and sculpture, was employed in the 50 works on display, which explored the theme of environment and pollution. The exhibition was remarkable for two reasons: all 18 participating artists were young women, and the genre was modern art, a rarity in Afghanistan.

‘The aim of the exhibition is to make artistic compositions out of everyday objects,’ says curator Rahraw Omarzad, also the director of the Centre for Contemporary Arts of Afghanistan (CCAA). ‘Our artists explore how we can reuse objects and materials that have been discarded to give them new meaning and reintegrate them into our lives. With this effort, we want to show that reintegration is only achievable with a different, more creative mindset.’ While this attempt to infuse creativity and relevance into the Afghan art scene is still in its infancy, there are encouraging signs of growth.

The institutionalisation of art in Afghanistan did not begin until 1921, when the relatively reform-minded King Amanullah Khan founded the first institute for fine arts in Kabul. Thereafter, progress was slow due to political turbulence until the arrival of the communists in the 1970s. Within 15 years thereafter, the three major art institutions that remain in Afghanistan today were set up, the most important being the Maimanagi Centre for Arts in Kabul, which was established in 197l. Then, in 1976, Kabul University became the first academic institution in the country to include an art department; Herat University established one only ten years later.

Unfortunately, little has changed since. Out of 34 provinces, Kabul and Herat remain the only two with a faculty of fine arts in their universities. And even in those places, the intervening decades had little effect on style and creativity in Afghan art, with realism remaining the norm. Nor has the country’s art scene become any more inclusive – the number of female students in the art departments of both universities, for example, remains extremely low. ‘The curriculum at most of our arts institutions has not changed for years,’ says Omarzad. ‘Our students are presented with models and oftentimes with pictures, and they are supposed to copy – and such copying only kills the creativity of artists. It gives them no opportunity to develop a style of their own.’

The instructors at the Maimanagi Centre say they still follow a curriculum that was created at the time of the Centre’s founding, in 1971. As Omarzad notes, that curriculum focuses completely on classical realism. Alam Farhad, the current director of fine arts at Kabul University, likewise says that the curriculum at his faculty had not been reviewed until three years ago.

The Afghan public, too, has tended to be sceptical of a formal arts education. ‘Families saw art only as vulgar song and dance, nothing more,’ says Farhad. ‘A fine-arts degree did not lead to a job or a prosperous life.’ This scepticism was duly reflected in Kabul University’s entrance exam. For close to three decades, fine arts remained the subject least in demand out of the 14 majors offered at Kabul University. Students who did not make it to their top choices – which alternated between medicine and law – would be forcibly placed in fine arts. ‘Every year, our enrolment was about 100 to 150 students, almost all of them placed into our department against their wish,’ says Farhad, who has taught in the department since 1993. ‘They would fail to make it to their top two choices and then, by default, would be sent to us, because we had empty seats.’

Vulgar to professional
The Taliban period struck a serious blow to the arts in Afghanistan. Music was banned, and art was limited to calligraphy and drawing of ‘immortal’ shapes. The first image that one encountered upon entering Afghanistan from Pakistan through the Torkham Gate in the late 1990s was broken drums and destroyed film tape hanging from a tall mulberry tree.

The fall of the Taliban, in 2001, ushered in a new beginning. The streets were filled with music on the very first day as barbershops brought out their razors to shave off beards that had been left untouched for a half-dozen years. Small cinemas called ‘video films’ – essentially a small room with a television and a VCR – popped up on every street, advertising old Indian movies. But the revival of art still seemed a daunting task, for its fragile foundation had been destroyed through three decades of neglect – followed by outright rejection.

‘When the Taliban left in 2001, we had seven professors and eight students in our department,’ says Farhad. ‘That’s where we began this journey.’ In the following seven years, the number of students increased. But the number of female students remained less than ten percent of the total as late as 2008. In the past three years, however, this scenario has changed significantly, in terms of both inclusion and creativity. ‘Today, I have seven hundred students here and close to 20 percent of them are girls. Quite often, I have to turn down students because we don’t have enough space for them,’ says Farhad, his eyes gleaming with triumph.

President Hamid Karzai’s contribution towards a relatively free media is considered one of his most significant achievements. Alongside, this growth has had tremendous impact on people’s mentality towards art, creating greater openness. With the strengthening of the visual media in Afghanistan, artists are increasingly seen as a vital pillar of society. Families have realised that the television they watch, the music they listen to and the graphics they see on billboards all need creators: art is not simply ‘vulgar’ song and dance any longer. Farhad and his department have adapted to the demands of the new media and, in the process, raised the profile of their faculty. ‘In the past, the failure of fine arts was that it could not adapt,’ he says. ‘Today, we know that our people want real jobs for their children and we also know the market.’

In the past three years, Farhad has introduced two majors in the department, focusing on digital graphics and cinema. The interest, he reports, has been tremendous: 94 students are enrolled in Digital Graphics, 53 of them female, the highest percentage of girls in any of the faculties. Second to this is the attendance in Drawing, which includes 26 girls and 37 boys. Farhad believes young women as well as men are interested in the new digital-graphics courses due to the rising demand for such skills in the market. ‘Television and magazines come to us often, asking for the services of our students,’ he said. ‘The prospect of jobs excites people, encourages them.’

Perhaps just as important for the popularity of such majors for women artists is the low profile. Unlike in music, cinema or theatre, with digital art the artist remains behind the scenes. Indeed, enrolment by women in these more high-profile artistic majors remains abysmal, also reflective of the prejudice that continues to exist against female artists as well as the difficulties they face. Some continue to battle the stigma, while others have opted for women-only art centres, which provide some with the independence to work and peace of mind.

Safe space
Of these women-only institutions, CCAA is doing more than simply providing women artists a secure space; it is also at the forefront of developing a modern-arts movement in Afghanistan. Founded in 2004, the centre initially welcomed both male and female artists, but soon Omarzad recognised a different kind of need. ‘Male artists have opportunities,’ he says. ‘It is the female artists who require a safe space to create art.’ However, in catering to about 50 women artists, CCAA remains cognisant of social barriers. ‘If we do not adhere to the cultural norms, our potential of becoming a movement could be suppressed and killed easily,’ Omarzad says.

Much of the work produced by CCAA artists speaks of the pain and depression of the past four decades of conflict, strife and political instability. More recently, though, the artists have turned their brushes to issues of immediate concern. In 2007, they depicted the Afghan National Development Strategy in large posters that were hung around the city. They actively used their art in raising awareness about the direction that country was headed. For the first time, female art was being exhibited on a large scale.
Despite the continued production of profound and inspiring art, Omarzad concedes that modern art in Afghanistan remains ‘limited in its scope and is yet to develop into a full-fledged movement’. But the passion and creativity of artists certainly indicates that Afghan art is finally opening up to new ideas. And female artists, despite limitations, are beginning to lead this effort.