On the Padma river

Every night her father would sit in the cane chair on the balcony, light a cigarette and look out into the night.  “It grows darker each day,” he would say. She would finish her homework and, with her mother safely tucked away in bed, creep to the balcony and sit at her father’s feet, her back to the railings. This way she could see the night reflected in his thick, soda-water-bottle- glasses. Then, he would start telling her stories.

In all her father’s stories about the land he came from, there was always water.

“There was incessant rain for a week at a stretch and the whole village almost drowned. I remember running away every afternoon to catch catfish in the channels of water next to our paddy fields,” he would say, absentmindedly tapping ash next to the ashtray.

Or he would tell the story of crossing the river in a rice-boat to visit the neighbouring village where his cousins lived, and then staying up all night to watch the water shine and shimmer in the moonlight.

“On our way back from school I would throw the muri (flattened rice) I saved during lunch into the waters to see if the fish would come up and nibble on the floating white morsels,” he would chuckle.

After every story he would pause and sigh and take a deep drag on his cigarette. Most days there would be just the one story, after which she would have to go straight to bed.  With school the next day, her mother was very particular about this routine.

But she would lie awake in bed and listen to the eleven o’clock local, chugging through the field behind their house. She would imagine the train heading straight into the distant land of her father where there was lots and lots of water.  In those few moments between wakefulness and sleep, she would float into a deep dream – water all around her, gurgling, chuckling, growling water, alive and restless, churning itself into a frenzy, and her sinking deeper and deeper into it. She felt an intense, painful longing inside, a longing she did not quite understand, perhaps for something she was not destined to have. In the mornings, as she touched the dampness on her bed, she wondered where she went in this dream, which recurred night after night. She wondered what she longed for so much at night, and why the longing disappeared like an apparition at first light, leaving just a sliver of heartache. The rest of the day she would stare at that ache – touch it, poke it with her nails, pinch it to see if it was real. Then she’d wait, impatiently, for another evening of storytelling, another night of her river.

On weekends, her father would often go on talking, telling her one story after another.

“Once, after it had rained for many days, a whole family of snakes came to live under the altar of Ma Durga, in the chandimandap (sanctum of the temple), next to the courtyard.  Montukaka, my father’s younger brother, called the snake-charmer from Madhukhali who knew how to talk to snakes. He came and sang to them and when they came out of the altar, he picked them up kissed them and put them to sleep,” he mumbled into the night.

The story of the ancestor who was a notorious river pirate, a Robin Hood type who stole from the rich and gave to the poor, whose name made the coconut trees shiver and whose voice thundered up and down the length of the river, made his eyes shine with pride. He laughed when he talked about how his teacher at the small village school always managed to slip and fall into the slush on the banks of the river. “We would clap so loudly from the shore and laugh so much that our hands and stomachs ached for hours,” he would say.

There were stories of his mother and aunts worshipping in the river, fasting and chanting the brata katha beside the waters. There was the story of his aunt who had no children, and adopting the river as a daughter, drowned red saris in the water during every pujo. There was the village madman too (every village had its share) who, when he had his weekly fit of screaming and cursing, would only quiet down when made to take a dip in the river. Or the story of the local mendicant who spoke chants into a bowl of water and caught thieves, or cast away ghosts and demons who frequently inhabited the bodies of young girls. Her father said he would often steal the bowl of water afterwards, and drink it quickly. Then he would try to see his face in the river, to make out if a demon had entered him.

But when he spoke of the many moods of the Padma, he always seemed disturbed. He referred to the river as a woman, a woman he couldn’t decide whether he loved or hated. He talked about the floods and the drought that the river brought to its shores, the lives it made and ruined. As he spoke, the Padma swirled around his words, casting a spell, making him lose sense of time and place. The stories of the Padma would always break midway, halt at the edge, pause, unfinished. 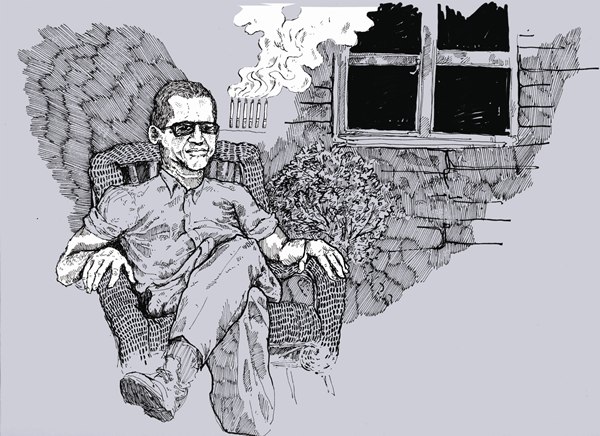 She remembered the evening her mother died. Her mother had been ill for a while and died in her sleep, at the hospital. It was monsoon and the rain was pounding the streets as it does in Kolkata. She and her father came back from the crematorium and almost in a trance walked to the balcony and sat down to stare into the night. He lit a cigarette and began talking.

“The Padma swallowed her you know,” he said.

“What are you talking about?” she asked distractedly.

“It ate her up, you know. My mother. She was so beautiful. She went into the river one afternoon and never came back. I think the Padma knew that me and my mother would leave her for another land. She was so vengeful, that river, she stole my mother away from me”.

“Baba! What are you saying?” she said, sensing his rapid descent into a depression she still did not know how to cope with. “How come you never told me about this earlier? You always said your mother died of illness, did you not?”

His voice broke, and he rasped, “No, no it was a curse I know. She went into the river and the Padma swallowed her. Maybe she cursed your mother too. Maybe it’s because of me. Somehow all the people I love are cursed by the river.”

“Come on, baba. Ma was ill for some time. The river has nothing to do with it. It’s just this rain and the damp, monsoon Kolkata night,” she said, clutching at the straws of his waning reason.

“The river must have come through my memory and entered your mother’s heart, freezing it in the water’s chilled embrace. Both our mothers, swallowed by the river. Because of me. I am the one cursed by her – the greedy, ravenous raksashi, Padma! Will you never forgive me for my exile?” he wailed into the night.

He went on, mumbling through his tears, shivering from the cold that had not yet descended into the Kolkata night.  Sometimes, after his mother had failed to return from the Padma, after he had moved across the new border to his temporary home of bamboo on the other side, shadows would call him to the river at night. Nishidaak, the people in this makeshift colony called it – evil spirits of the waters trying to entice a young mind. He was given an amulet to wear, washed in enchanted water. “What shall I wear now? How will I protect you?” he ranted as his mind wandered.

Burnt cigarette in hand, he cried into the night, “What if you have to leave this city? What will you do if others drove you away?  Are there others in your city, and will they burn your house, screaming the names of their gods? Will your river get angry too when you are forced to leave?”

He kept going back to the past and returning to the present, confusing her mother with his mother, the river with the relentless Kolkata rain, and his exile so many years ago with her mother’s death today.

“Forgive me, forgive me,” he whispered through his tears. She was not unkind, but this was as much as she could take on this night. Would he ever be able to forgive himself, she wondered as she left him like that on the balcony, a bundled heap of fear and regret.

She did not sleep that night. His rants were beginning to affect her. Maybe she was losing her mind too. She touched the barrenness inside her. It was moist, like the bed when she woke up in her childhood. But she knew nothing would ever grow there. It would not support life. She could hear the gurgle of the waters flowing ceaselessly into the gutters. Was it the river who hexed her to be barren, she wondered, still angry at her father and all those who left her and went away. Were there other such women, she mused, lying desolate and bare, carrying the curse of their banished ancestors? She felt an intense, painful longing deep inside her. A longing for something she was not destined to have.

Many years later, after her father’s death, she went looking for his village in the other land. She wanted to scatter his ashes in the river of his stories. They say she did not find the village – it had disappeared under the river Padma – but she did find the river, sit beside it and touch the water.

Slowly, the water rose into her veins. The moss climbed up her hands, twirled around her elbows and crawled into her chest. The green river-snake slithered into her lap. The floating bits of grass and reed caught in her hair and tiny fish circled around her waist. And slowly, as she became the river, the large yellow moon rose in her dark, dark eyes.

~ Arundhati Ghosh believes in stories and in their making. She works in the not-for-profit sector.