Everybody was Kondo tidying 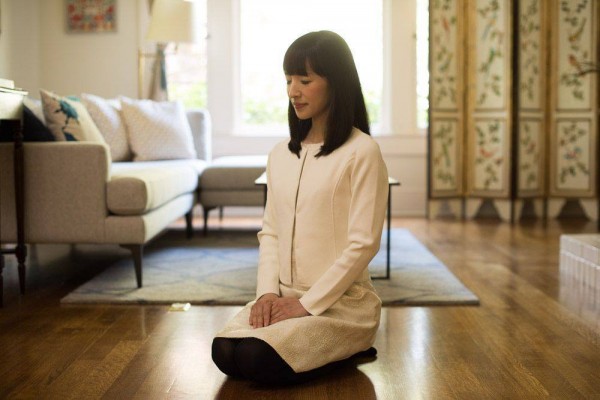 My sixteen-year-old son, Roshan, stands in front of me holding up a white thermal vest.

A few months ago, that would have been an odd thing to say. That was before Marie Kondo, tidying guru and diminutive powerhouse, took the world by storm. By which I mean: thanked it kindly, gave it a good shake, folded it into equal thirds, stacked it neatly on its side in a pretty box and put it in a drawer.

The former Shinto-shrine maiden from Tokyo shot to fame in 2014, when her book, Jinsei ga Tokimeku Katazuke no Maho, was published in English as The Life-Changing Magic of Tidying Up. In the seven years since the Japanese book first came out, Kondo’s titles have sold over 10 million copies worldwide, in more than 40 languages. The recent Netflix series Tidying Up with Marie Kondo has also been a massive hit. Clearly, she’s on to something.

The key word here is tokimeku. This delightfully onomatopoeic word roughly translates as to throb, flutter, or pulsate – and in Kondoese it means simply ‘to spark joy’. If something ‘sparks joy’ within you, keep it. If not, let it go. That’s the long and the short of it – or so it would seem.

Of course, in the wake of such mega-success there’s bound to be a backlash. It has been said that Marie Kondo’s advice is to limit the number of books you own to thirty. Thirty? people cried, clutching their bookshelves to their bosoms, what kind of a monster are you? Kondo, of course, never said this. “I don’t know where that rumour came from,” she said, perplexed, to American comic Jimmy Kimmel. “Oh good,” he deadpanned, looking around the chaos of his office, “’cos I need more than that.”

Neither, I am sure, did she say anything about only keeping the pages of books that ‘spark joy’ for you, and trashing the rest, but that hasn’t stopped people from doing just that. One American librarian told me, “We have had a lot of people donating books to the library with one or two pages missing. These books end up getting recycled because without that page or two we can’t add them to the collection or sell them in book sales.”

Kondo’s swirly skirts, her tendency to hop, skip and utter little cries of excitement, her evangelical focus and shiny clean aura, all make her deliciously parodiable. “My rent does not spark joy, so I decided not to pay it,” announced one tweeter. Another offers his advice on friendship using the KonMari method:

1. hold your friend up

2. check if your friend sparks joy

3. if no, thank your friend and put them in the trash

But I was determined to put this phenomenon to the test. Hence the pile of clothes on the floor, the empty chest of drawers, the quizzical teenager and the vest.

In the first episode of the Netflix series, Kondo explains to a bemused-looking young mother exactly what she needs to do. “The important thing is to hold each item. One by one. When you touch the item that sparks joy for you, you feel… tchuing!” She mimes a bubbly glissando of energy that starts around her elbows, squirms up through her shoulders and bursts out like a lightly shaken bottle of soda: tchuing! The woman giggles nervously and mimics Kondo’s tiny fists of happiness. “Tchuing!? Oh, okay. Okay wow.”

“Do you know what it feels like when you spark joy?” Kondo goes on, in a piece-to-camera. In these sections of the show, Kondo perches like a finch on the edge of a perfectly level sofa (or a neatly made-up bed) in order to explain stuff from different camera angles. “You feel it when you hold a puppy… Some of you may not know how that feels yet but please do not worry,” she says reassuringly. “Your sensitivity to joy will be honed as you progress through the tidying process.”

With no puppies to hand, I take the vest gingerly from my son, breathing through my nose, senses on high alert.

“Not,” I say in a small voice and onto the pile it goes.

Each episode of the Netflix series focuses on one particular household. It is bizarrely compulsive viewing, not only for the ‘before and after’ transformation of the physical space pre- and post-Kondo, but because in each case something deeper and more fundamental needs fixing. In every case, the couple (usually) or the family at its heart are looking around their living space – or rather lack of space – and seeing in their lives chaos, bewilderment, a deeper psychic disconnect. They feel ‘overwhelmed’ by their stuff, ‘burdened’ by possessions. “This is not the life I was meant to have,” says one, tearfully surveying their children’s room. “It feels like we’re drowning in toys.” “I feel guilty all the time;” “I can’t think straight”. Each person expresses something like despair and in their eyes you read the hope that the KonMari effect will sort out not just their kitchen drawers but their relationships.

Asked by talk-show host Stephen Colbert why Americans love her philosophy of cleaning up so much, Kondo replies (through her interpreter): “I think it’s that of course we all have problems tidying our homes, but not just that: we all have clutter in our hearts.”

The audience applause is spontaneous, warm and long. Decluttering the heart – now there’s something that we could all do with.

In 2015, after two decades of living in Delhi, my son and I moved to England. This was not a tentative see-how-it-goes trial, but a once-and-for-all move. The decision had been far from easy and far from quick.

I whittled down my books to a few cartons to ship and finally stood in the house surrounded only by dust and memories. All our worldly goods fitted into four suitcases – for each of us, one large, one small.

To be free of one’s stuff at the age of 50 was the most fantastically liberating feeling. I knew that my ability to do this – to shed my material goods in the surety that I didn’t actually really need them – was absolutely linked to the fact that my family would be there at the other end to meet us, house us, feed us and keep us warm.

Unzipping our cases when we finally arrived back in England, I surveyed the contents. The Kashmiri papier-maché owl had made the journey intact, inside it the tiny hospital wristbands with which my baby came home. But if the last of our luggage had fallen into the sea, I would still have been happy, perhaps even happier, high on the smoke from all those burning bridges, and drunk with the delicious anticipation of a new start.

“Come on, Mum. Spark joy or not?” Roshan’s patience is wearing thin, but I’m too busy parsing stereotypes to notice.

Americans love Kondo because, (a) they have too much stuff and, (b) her solution largely seems to be about how you feel, and feelings are top of the agenda over there. I bought all this stuff, they seem to say, why aren’t I happier? Fifty-five years ago, the Beatles sang ‘Can’t buy me love’ – you’d think they’d have learned by now.

Brits have a lot of stuff, but not as much as Americans, and are mortified at the thought of having any feelings at all.

Indians not only don’t have much stuff, they don’t have much space. Every Indian woman (and I exaggerate wildly) is born with an innate ability to organise the personal items of an entire family of 12 into a single Godrej almirah. Who needs Kondo-magic when you can fit bartans, boxes, plates, chai, chutneys and several three-course meals for everyone into two small hold-alls under the train seat? Who needs tchuing! when necessity has already honed your relationship to the physical realities of your world to a spectacularly fine point?

In India – it is famously said – nothing goes to waste: yet you can’t ignore the fact that this is less to do with enlightened ecological principles than a starkly iniquitous social hierarchy and division of resources.

Marie Kondo has risen to glory on the tide of a particularly First World problem: too much stuff, not enough time, nowhere near enough happiness. But the issue is not just about acquisition but about disposal. What do we do with the excess, with the leftovers, the stuff we don’t want or can’t use? The landfills are full, the oceans toxic – we are waking up, very late in the day, to the simple fact that we need to deal with (if you’ll excuse the Americanese) ‘our shit’.

Earth Overshoot Day – the day our consumption of resources exceeds the Earth’s capacity to regenerate those resources in the same year – in 2019 will fall on 1 August. We are using up 1.7 Earths every year. It can’t go on like this.

Perhaps this Kondomania is a symptom that something is changing – and for the better, as we collectively recalibrate our relationship to our physical world.

I’m not sure I want to live in the dustless and, frankly, antiseptic rooms that Marie Kondo inhabits to deliver her to-the-camera pieces, where everything is in its place, and even her small children – she has two daughters, aged two and four – have tidied up and been tidied away. Does my thermal vest spark joy? Well, perhaps not. But it’s going back in the drawer, nicely folded, because – and I thank it for this – it keeps me warm. It also, like everything, has an environmental cost – in its making, in its use and in its afterlife – and that’s something that I cannot afford to ignore. Perhaps that is the real gauntlet thrown down by the extraordinary Marie Kondo, albeit lightly, and with a fair amount of twinkle: can we imagine how our lives would look if we lived in harmony with our material world?

Writer and editor Anita Roy moved back to the UK in 2015 after 20 years of living in Delhi. She now lives in Wellington, Somerset, with her son. She holds an MA in Travel and Nature Writing from Bath Spa University, and is a regular columnist for the Hindu Business Line. More of her published work can be found on www.anitaroy.net.