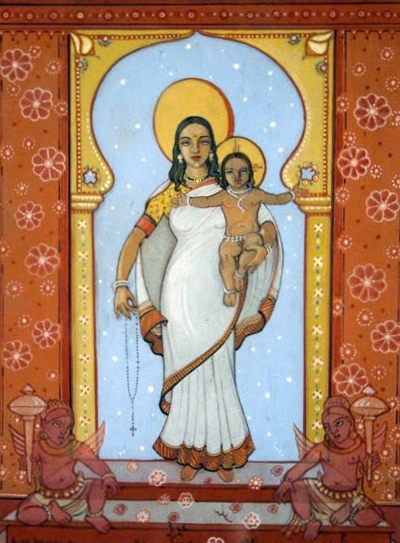 The dusk years of the British Empire threw up a plethora of new aesthetics that have since governed the display of and writing on Indian art. During the latter half of the 19th century, the works of Raja Ravi Varma, a painter from the princely state of Travancore, began to focus on visualising mythological themes, albeit rendered in the styles of Western academic art. Some decades later, Amrita Sher-gil used the flourishing strokes of the cave painters of Ajanta to deal with contemporary themes, while Jamini Roy’s Adivasi and folk renditions co-opted diverse visual styles into contemporary art. Around the same time, from the mid-1930s to the 1960s, Angelo da Fonseca, a Goan artist housed at the Kristi Prema Seva Ashram, an Anglican institution in Poona founded to promote dialogue between cultures, was trying to give a new ‘visual lexicon’ to Christian art. In this, he was particularly exploring how to allow Christian art to absorb the cultural languages of the Subcontinent – a link truncated, possibly even irretrievably lost, to the exigencies of the colonial situation.

In Goa, at the time a tiny Iberian colony, a spectrum of changes was bringing a new political ethos to the landscape. Elite families had been working as agents for the colonial power while still keeping the broadened roots of their identities intact; many were slowly beginning, for instance, to shed their ballroom dresses and embrace khadi – a new nationalism that began to spread to several families across the social stratum, including that of Angelo da Fonseca. Born in December 1902, Angelo hailed from an elite family of Santo Estevam, an island village near Panjim, where the family owned huge estates and held some lucrative political posts in the colonial administration. His choice to be an artist was a premeditated one, though secured at great odds.

Like most Goan sons of the time, da Fonseca had three career paths to follow: doctor, priest or lawyer. Dutifully, da Fonseca began down the road to becoming a doctor, but quit after just a year of studies, moving to Shantiniketan in West Bengal. ‘I wanted to be a shisya of the best Indian artist in the twenties of this century, Abanindranath Tagore’, he later wrote in an essay. Though Tagore did not teach at Shantiniketan, he did mentor promising art students there, and da Fonseca’s proximity to the Tagore clan is evidenced in a number of his early sketches of various members of the family.

According to one possibly apocryphal story, Tagore is said to have told da Fonseca after a 1934 exhibition of his work in Calcutta, ‘Go back, young man, and paint churches!’ Indeed, da Fonseca appears to have taken this advice seriously, for his subsequent body of work, including his writings, reveal an attempt to root Christian imagery in local culture and art traditions. In so doing, he also attempted counter the feeling that Christianity was a ‘foreign’ religion.

Gods are us
Da Fonseca was painting at a critical time in history, and the opposing forces of the national imagination and his own colonial identity automatically made for a complex positioning of his work. Important in this is the backdrop of the coming of modernity in a small enclave such as Goa, itself a part of a whole yet also whole within itself. Cultural sensibilities within pre-Liberation Goa were in fact far more complex than those within India as a whole, as reflected in da Fonseca’s work and the responses that it generated.

During the three and a half decades of artistic work before his death, da Fonseca created almost a thousand works – watercolours, oils, pastels and some stained glass. For murals he also experimented with Goa clay, known as shedd, sifting, pounding and mixing it with oils and bonding agents in the tradition of old icon painters. The end results were exciting tones of fine-grained terracotta, today seen in the niches of the Denobili Chapel and at St Xavier’s Church, both in Pune.

Stylistically, he borrowed from a range of art traditions, including Islamic, imbuing his Christian family and saints with new meanings, values and symbols in Indian geographical surroundings. Ironically, it was the rejection of a Western art tradition that made him a cause célèbre internationally; the new settings gave his work an ‘exotic’ quality for many outside of the region, which fitted into the theoretical paradigms through which the colonised East was being viewed at the time.

Within India, interest remained high among Catholic audiences, though sections of which were to become his harshest critics. Historically, Christianity established itself by relegating existing gods to the realm of devils and heathens, often through extremely harsh measures. For instance, converted Catholics in the Subcontinent were burned at the stake for such small ‘lapses’ as reverting back to not using salt in the preparation of rice. In this way, Catholicism created masses of followers for whom a very specific religious path had been defined. Da Fonseca’s tampering with details within the religion – for instance, the re-clothing of Christian icons – was therefore understood to be heathenistic and iconoclastic. The Roman Catholic Church took umbrage against his renderings of a brown-skinned Madonna and various saints. Meanwhile, neither the colonial government nor the common people were in any mood to re-clothe the Virgin Mother and the pantheon of saints in Southasian garb.

Moreover, for the Catholics, the classical Mary was a source of identity that connected with ‘white society’, and da Fonseca’s art was thus deemed threatening. Likewise, the inclusion of plebeian elements such as working-class clothes, and backdrops of earthen diyas, charpoys, khaddar mats and grazing shepherds in dhotis genuflecting before the child Jesus was met with rancour. The Virgin, after all, had been shorn of her more earthy elements by the Western religious and artistic tradition, and the humble scene of the nativity was widely accepted.

Da Fonseca did not stop there. He also replaced the statuesque pose of the Virgin with the lilting tribanga, a posture from classical Indian dance, art and sculpture, wherein the body breaks at the shoulder, waist and knee. Small indigenised angels, posing with gadas (clubs), looked like dvarapalas (temple guardians) before the Virgin housed in a niche decorated with conches and flowers. Da Fonseca’s Virgin squatted in padmasana, the lotus position, sporting warm tropical colours, Southasian jewellery, often wearing mogras (a kind of jasmine) in her hair, and even wearing lehnga and dupatta to denote her pre-nativity stage. While the faithful Christians had imbibed Western cultural traditions, da Fonseca’s Virgin stood in a Mira-like pose, her hair left open to signify a renunciatory stance, as is common in religious imagery in India. Yet this translated into a different perception from the Christian faithful: the Madonna is usually depicted with little of her hair showing, and women of elite families in Goa tended to wear their hair shoulder length, while hair left open was associated with dancing girls, veishyas and entertainers. Meanwhile, the indigenised infant Jesus lay in a charpoy crib or stood in the arms of his mother, naked like Krishna, while ornamental diyas lit up the holy presence of mother and child. In some way, da Fonseca’s paintings seemed to be saying ‘Gods are us.’

The native Goan elites, who regarded themselves as modelled upon European families, were far from pleased with da Fonseca’s depictions. While the Anglican Church had differences over da Fonseca’s penchant for the Virgin iconography, as its members did not worship her, the Catholic Church was quickly up in arms against this ‘Hinduisation’. Ironically, less than a decade after da Fonseca’s death in 1967, the Roman Catholic Church replaced the Latin mass with a more participatory one in regional Indian languages. In a sense, da Fonseca’s opening-up of the realm of the secular through a ‘nativisation’ process of art allowed for a similar movement to follow with regards to Christian ritual generally.

Critics were also uncomfortable with the way in which common people played significant roles in da Fonseca’s depictions of the Virgin Mother and saints. Marina Correia-Afonso, who was a young medical student in Poona, remembers her mother telling da Fonseca that he could not paint his wife, Ivy, as the Virgin Mother and then expect people not to take offensive. Correia-Afonso also remembers the artist’s stock defence: that she would never know how many lovers, wives and mistresses of painters had been featured throughout the history of Christian art.

Over the course of da Fonseca’s career, his depiction of the Madonna figure went through an interesting metamorphosis. While the clothes remained traditionally Indian working class and rustic, the visage of the Virgin began to take on gentrified upper-class features. The dominant characteristics of his own family members also began to pulse through his paintings, such as the aquiline profile of Ivy (whom he married in 1951) and the serene expression of the honey-toned Alice, his niece. At another level, while his early works show a very Islamic influence, with materials such as chiffon and bright colours used in an effort to move away from European ‘blues’, during the 1940s and 1950s rustic khaddars and borders of the Puneri sari came to be used in striking detail.

Throughout this process, da Fonseca not only tried to steer clear of criticism of ‘debasement’ of Christian iconography, but also to pre-empt a Hindu backlash of ‘copying’ such imagery. To this end, he maintained relationships with the family of Lokmanya Tilak, a prominent member of the independence movement (from the early 1900s) and a Hindu nationalist; he also kept ties with both Roman Catholic Jesuits and the Anglicans, constantly emphasising that he wanted to find a home for Christianity in India. In this effort, he presumably wanted to avoid blindly copying Hindu religious imagery. These networks gained increased importance given that no royal patrons existed at the time. Yet in a context in which iconic status for Indian artists did not yet exist, da Fonseca suggested that the ‘symbolic value’ of his religious work would be far greater than secular recognition.

Over time, da Fonseca’s artistic persona acquired a lifestyle  similar to the one he evoked in his paintings. The bicycle, kolhphuri chappals, cheroot, beret of his early years (replaced later by the Nehru cap) and block-printed cotton shirts became the essential requisites of everyday life, rendered plebeian by his worldview. Considering the nature of his art, it was important that his work be accepted by a cross-section of people, both commoners and elites – a tall order for any artist. While new trends in art are generally first accepted by the intelligentsia, the nature of da Fonseca’s imagery made commoners his most vehement critics. All the same, a number of priests were excited by the challenges a post-colonial society was throwing up, and promoted his art. Such patronage helped to redeem da Fonseca’s art from the disgrace into which it had fallen after the artist drew the ire of both the clergy and laity, following his painting of the Virgin in a sari. That incident led the Goan colony in which he lived to exile him, and thereafter he made Pune his home until his death.

Today, da Fonseca’s work has been largely forgotten, even among scholars. While a few exhibitions have showcased his work posthumously, for the most part these have led to his memory being toasted only within Christian circles, without any real appreciation of his overall artistic contribution. Indeed, to discuss his work today is to recognise that Angelo da Fonseca and numerous other regional artists have been largely neglected, relegated to the shadows of art history’s corridors.

~ Savia Viegas is an artist and art historian in Goa. Her ongoing research on the work of Angelo da Fonseca has been funded by Victor Menezes and Francis Wacziarg.