What you need to know about Pakistan’s general elections being held on 25 July. 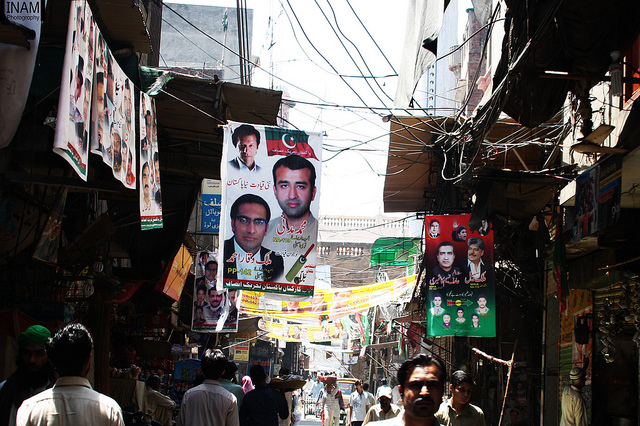 Pakistan is set to go to the polls on 25 July 2018. The upcoming general elections will be the country’s second-ever democratic transition of power – the first having taken place as recently as 2013, when the Pakistan People’s Party (PPP) government handed over the reins to the Pakistan Muslim League-Nawaz (PML-N). These polls will also mark an unprecedented period during which two successive democratically elected governments have completed their terms.

The PML-N government completed its five-year term on 31 May this year, after which the Parliament – the 14th National Assembly – was dissolved. A caretaker government, headed by former Chief Justice Nasirul Mulk as interim prime minister, was sworn in to oversee the country’s affairs until a newly elected administration takes over.

The 2018 election promises to be a close contest between the older political parties with their chequered pasts, the anti-corruption upstarts promising radical change overnight and the powerful military establishment allegedly pulling the strings behind the scenes. Pakistan’s increasingly self-censored media, meanwhile, lies battered and bruised in their electoral wake.

The contestants vie for 272 out of the total 342 seats in the National Assembly, the lower house of Pakistan’s bicameral Parliament. Members are elected in single-member constituencies in a first-past-the-post (FPTP) system of voting. Of the remaining 70 seats, 60 are reserved for women and 10 are allocated for ethnoreligious minorities – both of which are to be filled via proportional representation (PR) by parties who cross the threshold of five percent of the total vote count. These reserved seats are also divided across the provinces in proportion to their populations.

The party or alliance that wins 172 seats will secure the simple majority required to form a government. So far, no pre-poll alliance has been formed between any of the major political parties.

This year’s elections will be held under the new delimitation of constituencies that followed the 2017 census. Pakistan’s most populous province, Punjab, is allocated 141 seats, followed by Sindh (61), Khyber-Pakhtunkhwa or KP (39), Balochistan (16), the Federally Administered Tribal Areas or FATA (12), and Islamabad Capital Territory or ICT (3). The delimitations only slightly changed the earlier distribution, with most significant being the seven-seat decrease in Punjab’s allotment. KP and FATA continue to have separate constituencies despite the recent KP-FATA merger.

No PR seats have been allocated for women in the FATA or the capital this year, as was the case in 2013. The tribal areas have historically been neglected and, until reforms were passed this year, the region was governed by laws that were distinct from those that applied in the rest of the country. The reserved seats for women were, therefore, divided only among the four provinces. 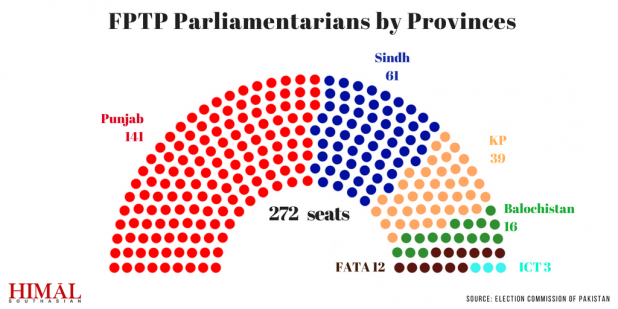 For the PR part of the election, parties are required to list their priority candidates for both women and minority seats prior to the election. The ECP has already received nomination lists from all parties for both categories of reservation.

Former Prime Minister Nawaz Sharif has been barred from holding public office for life by the Supreme Court on corruption charges over undeclared income and family assets, following the much-publicised Panama Papers scandal. Still, his party, the PML-N, continues to hold considerable sway over voters, particularly in the party’s stronghold of Punjab, which accounts for a majority of seats in the National Assembly (over 51 percent). However, the recent ruling by Pakistan’s accountability court sentencing Sharif to ten years in prison may prove to be a difficult hurdle to overcome at the national level, to say nothing of the allegations made by Sharif himself that the military is plotting his party’s defeat.

PML-N spokespersons have accused Pakistan’s all-powerful military of coercing or attempting to coerce its members to switch their allegiances to rival parties, effectively rigging the polls in favour of the PML-N’s biggest challenger this year, the Pakistan Tehreek-e-Insaf (PTI), led by cricketer-turned-politician Imran Khan.

Shahbaz Sharif, Nawaz’s brother, who now leads the PML-N in the run up to the polls, has also openly accused the caretaker government of blatant pre-poll rigging, pointing to the recent spate of arrests of hundreds of his party workers and supporters. 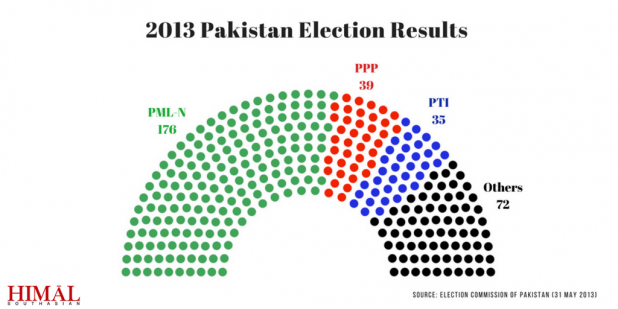 New man on the crease

PTI chairman Imran Khan has long been a thorn in the side of the political establishment, having made a career out of populist movements highlighting government corruption. Since his entry to active politics in the mid-1990s, Khan has also espoused a number of socially conservative causes and amassed what detractors have called a cult of personality. The PTI has already secured the loyalty of a number of prominent and, more importantly, electable PML-N members and is expected to do well in the upcoming polls. Even without the security agencies openly or discreetly backing the PTI (both Khan and the military have denied any collusion) or without help from his newfound friends, Khan has been counting on the party’s populist, anti-incumbent rhetoric, as well as the PTI’s performance in the KP province it currently administers, to hand his party the federal government and him the premiership.

Most public surveys suggest a close contest between the PML-N and the PTI for the highest votes, with both enjoying between 25 to 30 percent of the popular support. Meanwhile, the PML-N’s traditional rival, the Pakistan People’s Party (PPP), led by former Prime Minister Benazir Bhutto’s son, Bilawal Bhutto Zardari, is trailing behind at around 15 percent in most polls.

PPP chairperson Bhutto Zardari has not minced his words on the strong-arm tactics allegedly employed by the military in engineering the election’s outcome. He has also lambasted the media for apparently favouring the PTI. All is not lost for the once influential party, however. The PPP is leading the opinion polls in the province of Sindh at 44 percent, according to Gallup. In Balochistan, where the PML-N’s popularity has waned according to several polls, 36 percent of voters prefer the PPP, suggests Gallup. Interestingly, support for the PTI, which enjoyed 21 percent support in Balochistan last year, has now dwindled to 12 percent.

There still seems to be a place in Pakistan for dynasty politics – something Bhutto Zardari is bound to capitalise on. Most opinion polls suggest that PPP will emerge in third place with a decent chunk of the vote.

Chairperson of Jamiat Ulema-e-Islam (JUI-F) Maulana Fazalur Rehman has long been a key player in Pakistani politics, particularly in coalition formation. The JUI-F was a prominent partner of the previous PML-N-led government, with 13 seats to its name in the National Assembly. This year, Rehman has put together an alliance of religiously oriented parties called the Muttahida Majlis-e-Amal (MMA).

President of Awami National Party (ANP) Asfandyar Wali Khan is another candidate to watch out for in the 2018 general elections. Khan is a prominent socialist Pashtun leader known for his vocal views on and advocacy for Pashtun rights.

The 2018 national elections will also see two transgender candidates contesting. Among the key electoral issues for Pakistan’s transgender population is accurate gender recognition in government documents. While Pakistan has a ‘third gender’ option in official identity documents, the transgender community has complained that government officials often assign them incorrect gender.

The Human Rights Commission of Pakistan (HRCP) in a recent statement noted the “blatant, aggressive and unabashed attempts to manipulate the outcome of the upcoming elections”, adding that there are grounds to doubt its legitimacy. The HRCP also expressed “serious reservations” about the extraordinary powers accorded to the security forces in the name of ensuring a free and fair election. The army is expected to deploy some 371,000 troops on the day of the elections. “Such measures are unprecedented and border dangerously on micromanagement by an institution that should not be involved so closely in what is strictly a civilian mandate,” the HRCP said in its statement.

Both the PML-N and the PPP have pointed fingers at the military establishment, accusing them of putting pressure on their candidates. The HRCP also said it was “deeply concerned that the political class is being selectively squeezed”, adding that electoral opposition to the two mainstream parties – the PML-N and the PPP – are being manufactured in strategic areas. However, the HRCP did not explicitly state who was behind this pressure of political parties. Nawaz Sharif, meanwhile, went as far as to name a senior ISI official, who he claimed was leading the campaign against his party, and also accused the military’s intelligence wing of intimidating his party’s candidates into switching loyalties or running as independents.

Fears of election violence mount as a week of bomb blasts culminated in a suicide attack that killed at least 130 people at an election rally in Balochistan. Among the victims was the Balochistan Awami Party provincial assembly candidate Siraj Raisani.

With just days to go to one of the most important elections in Southasia, it’s impossible to tell at this point who will emerge victorious – though the odds are looking increasingly favourable for Imran Khan and the PTI. Nor is it very clear whether the outcome has already been decided, the loud allegations to that effect notwithstanding.

Southasiasphere episode 07: Updates and analysis from around the region.

The crackdown on comedy

In India, it’s not clear who has the last laugh.

Getting the jab done

A crossborder discussion on COVID-19 vaccinations in Southasia.