Why has #MeToo remained a murmur and not gained more traction in Pakistan? 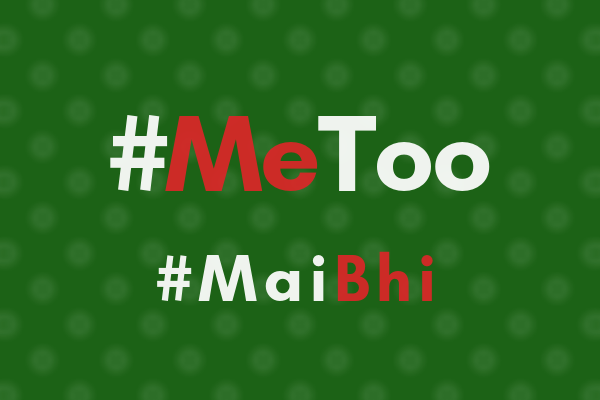 As the #MeToo movement gathers momentum across various parts of the world, Pakistan remains largely unaffected by it. Far from making waves, the social-media-driven movement has hardly made ripples in the country. Among the most prominent cases connected to the nascent #MeToo activism in Pakistan has been that of popular model, singer and actor Meesha Shafi. In April 2018, Shafi came forward with allegations of sexual harassment against fellow musician and actor Ali Zafar. Zafar denied the accusations and subsequently filed a defamation suit against her. In fact, his film Teefa in Trouble, released after the allegations were made public, was screened in theatres all over the country and ended up raking in more than PKR 300 million (USD 216,000).

In fact, many of the statements emerging from within the industry have been disparaging rather than supportive of #MeToo, with numerous celebrities rallying to Zafar’s support. Model Sadaf Kanwal, for instance, recently remarked on a prime-time TV show that “You should just come out immediately after you have a MeToo incident. Why are you recalling it later?” Kanwal’s remarks cannot be seen in isolation; they indicate a bigger problem when it comes to talking about sexual harassment in Pakistan.

So why has #MeToo remained a murmur and not grown into a larger movement in Pakistan? Foremost among the reasons is the taboo and stigma surrounding victims of sexual harassment in Pakistan. Any disclosure of sexual harassment or abuse, including child abuse, is considered shameful and a source of indelible stigma and dishonour for the victims or survivors, and their families. Any public conversation about it, therefore, inevitably invites backlash. Women braving trauma to air their story are often subjected to blatant vilification, malicious mud-slinging, victim blaming, social ostracisation and even threats of physical violence. The fact that even Shafi – a celebrity with an established domestic and international career – wasn’t spared such responses is suggestive of what an ordinary woman would have to endure were she to openly speak about sexual harassment.

Some feminist activists and scholars identify a serious problem among those who proclaim themselves feminists as well. Nida Kirmani, an associate professor of sociology at the Lahore University of Management Sciences, who writes on gender, Islam and women’s movements, says “Even in circles that one would think are progressive, there is little understanding or acceptance of the seriousness of the problem of sexual harassment. While awareness is growing slowly, one would need a wider critical mass of people who are receptive to claims of sexual harassment in order for a Pakistani #MeToo movement to really take off.” Author Rafia Zakaria writes that “When faced with an actual #MaiBhi [Urdu for #MeToo] moment, the vast majority of Pakistan’s feminists, the most notable of whom tend to be among the country’s elites, are choosing inaction, ambivalence or silence.” This is particularly true of celebrities who have self-identified as feminists. As Hamna Zubair, an editor with the Dawn newspaper, argues “It’s not so much of a stretch to say that allying with a woman who alleges harassment will alienate a company or an entertainer from their consumers or fans.” That class associations, fraternal feelings and financial interests trump commitments to progressive causes is an indictment of many for whom speaking about social justice and egalitarianism have become acts contingent upon convenience.

Pakistan’s legal framework does not aid in the fight against sexual harassment either. Fatima Anwar, a lawyer who works on women’s issues, explains, “We have basic penal code provisions against harm, and laws against workplace harassment, but we do not have a distinct and separate law that directly addresses, criminalises and deals with sexual harassment as a whole.” Indeed, Meesha Shafi’s case against Ali Zafar, which was pursued under the Protection Against Harassment of Women at Workplace Act 2010, was dismissed precisely because her relationship with Ali Zafar could not be deemed as that between an employer and an employee. This is despite the language of the Act and a legal precedent which expanded the scope of the law to cover harassments faced not just by employees but any woman in a workplace. Anwar adds that evidentiary standards, particularly when they do not pertain to penetrative rape, are very flawed. “Sexual harassment rarely happens in broad daylight with multitudes of witnesses. Therefore, it is usually the word of the survivor against the attacker. Factor into this the institutional sexism of the courts, the internalised sexism of judges and the widespread harassment within the legal profession itself, and you realise why the likelihood of a conviction for a sexual harasser is very low,” she says.

Another barrier to the #MeToo movement in Pakistan is its potential for being used to bolster a further restriction on the already limited liberties that women have, such as the freedom to study and work, or move in public spaces. Any surfacing of instances of sexual harassment – especially in educational institutions, workplaces or public spaces – is taken by many as a vindication of the conservative notions which call for confining and sequestering women within the four walls of their homes and prohibiting interactions with members of the opposite sex. The argument goes that it is precisely to prevent such unpleasant and unwanted occurrences that religion and culture instruct women to stay in the safety and comfort of their homes, under the watchful and protective gaze of their fathers, brothers or husbands. To disclose, therefore, is to risk hard-won but fragile and precarious liberties. Speaking up about past sexual harassment or abuse in consensual relationships would endanger these women even more since dating is explicitly forbidden or looked down upon in many families. As a result, consent ceases to be of importance as the focus shifts on a woman’s involvement in a relationship – a space they weren’t supposed to be in, in the first place.

Despite the lack of traction gained by the #MeToo activism in Pakistan, attempts to change the situation continue. Earlier this year, student Ushnaa Habib took to Twitter to collect, compile and publish a stream of anonymous accounts of sexual harassment, many of which named well-known individuals as the perpetrators. She says “it took an immense strength from the women’s side to even consider opening up. The fact that they wanted to remain anonymous still breaks my heart because the fear of what men will do to them is far greater than you and I can imagine.” She adds, “There were screenshots and testimonies I could not even post, because of how scared the girls were. Every single girl was scared of her family and not necessarily of the men they were naming.” Although Habib eventually found herself at the receiving end of numerous threats, including rape and death, she maintains that she “did the right thing” to help create an environment where it is safe for survivors to speak up.

Similarly, Nighat Dad – who heads the Digital Rights Foundation which seeks to combat cyber-bullying and make the internet safe, especially for women – has been in the process of compiling the names of pro-bono lawyers willing to represent victims of sexual harassment. Actor and director Angeline Malik has also launched the #InkaarKaro (#SayNo in Urdu) initiative, which aims to help women realise that “they don’t have to be victims. They have the power and the voice to say no.”

A few public figures like Nadia Jamil, Frieha Altaf and Maheen Khan have also come forward with their own accounts of sexual harassment, offering support to the movement. Last year, several women emerged with allegations of sexual misconduct against Khalid Bahjwa, a cofounder of the local music streaming giant, Patari. This resulted in his swift resignation, although the level of his continued behind-the-scenes involvement with the company remains an unclear and contentious matter.

More importantly, Pakistan has a long history of feminist movements to build on. Kirmani provides a useful reminder that “women’s rights activists have been working consistently and persistently on the issue of sexual harassment for years. It is because of them that we have gotten as far as we have in terms of having a law in place at the national level and some formal mechanisms in particular institutions. The discussion of #MeToo should be seen as part of that wider movement.”

The future of #MeToo and other efforts to seek justice against sexual harassment in Pakistan may be uncertain in the short run. But what is for certain is that the subject of sexual harassment is increasingly coming to the fore. It is possible now to discuss the issue, even if the conversation is uncomfortable and limited to the movement’s negligible impact. #MeToo may not be Pakistan’s defining moment in the uphill struggle against sexual harassment and abuse, but the silences which have rendered the movement largely mute in the country, have also ironically and piercingly made visible the everyday risks and realities for women.

The changing and competing meanings of feminisms in Pakistan.

India’s #MeToo moment and the question of due process.

Hafsa Khawaja is a Lahore-based student of politics, history and Southasia. She writes on Pakistan’s socio-political affairs at hafsakhawaja.wordpress.com. Her work has been published in The News, the Nation daily, Pakistan Today, the Friday Times, Daily Times, Dawn Blogs, Muftah, and Fair Observer.