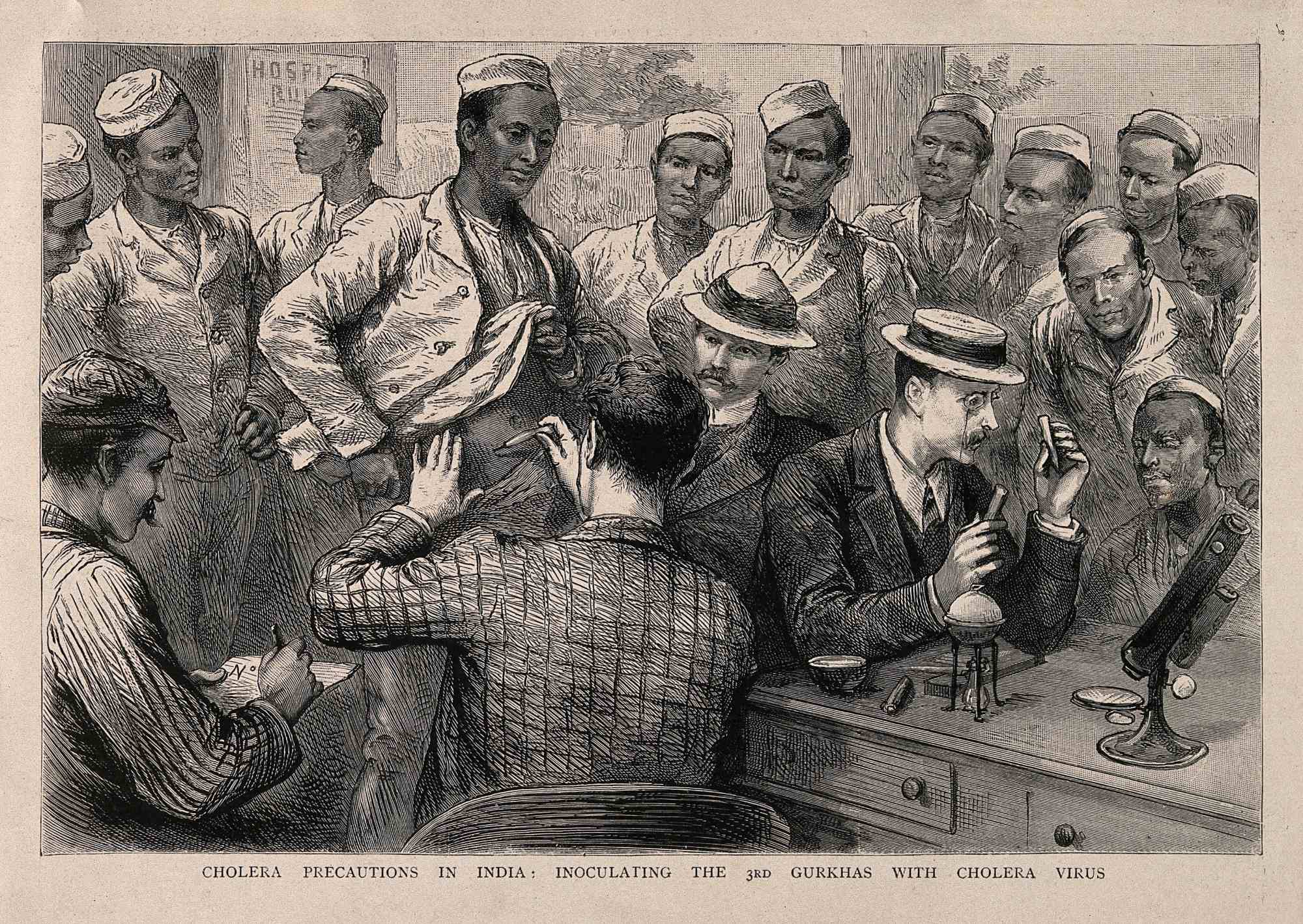 Cholera vaccination of the 3rd Gurkhas in India at the time of the 1893 epidemic. Reproduction of a wood engraving, 1894. Photo: Wellcome Collection

The fact that healthcare workers are writing their wills reminds us that there is a legal life to this pandemic age. In Southasia, COVID-19 will confound the legal preparations of households and institutions while enabling sweeping new state powers. As elsewhere, it will also birth new kinds of fraud and crime.

Much of this may feel unprecedented. But epidemic diseases have been distorting Southasian law for centuries. If the legal history of pandemics were a classic film, its stars would be the grim duo of cholera and the bubonic plague. Influenza would play a supporting role.

Such a film would begin with struggling courts and lawyers. When the bubonic plague arrived in Bombay in 1896, it immobilised the courts and the legal profession. A managing clerk named A J C Mistry at the Bombay law firm Wadia Ghandy & Co. described the situation in early 1897. Most people had fled Bombay, which had “the melancholy appearance of a deserted city.” Trade was paralysed, the value of immovable property dropped, and the judges of the Bombay High Court “had no work to do.” Although Wadia Ghandy’s support staff returned to work in just four months, at least three would die over the next decade due to the plague. This included a Parsi copyist called Dinshaw Dorabji Bhajiwalla, who died in 1907 along with several members of his family. The deaths, Mistry writes, “caused a stir in Bombay”.

When the flu arrived in 1918, the Calcutta High Court was similarly hit. Assistants in several departments fell sick, as did lawyers and jurors. The Court continued to sit, but with more delays than usual. A century later, the court’s regular work is now suspended due to COVID-19, but with videoconferencing for urgent matters.

A film about the legal history of epidemics would also include a sub-plot on legislation giving the state new expansive powers. India’s Epidemic Diseases Act of 1897 was the most famous of these statutes. It was a response to the plague. Under this statute, governments across British India enforced plague regulations like Bombay’s. The Act led to coercive state measures including aggressive house, body, and corpse inspections, the segregation and hospitalisation of suspected cases, and even the use of troops. These modes of intervention triggered popular resistance, including mass attacks on hospitals and the assassination of a plague official by anti-colonial revolutionaries in 1897. People who failed to comply were put on trial for the crime of disobeying a public official’s order. In some cases, these defendants were acquitted by the higher courts. Like war, epidemics tested the boundaries of individual rights and rule-of-law values.

“The acute effects of the poison so much resemble an attack of Asiatic cholera,” wrote W J Buchanan, editor of the Indian Medical Gazette, on arsenic around 1905, “that suspicion is unlikely to arise, especially if it happens that cholera is at all prevalent in the neighbourhood at the time.”

But despite the historical impact of epidemics on courts, the legal profession and legislation, at its heart, this film would be a detective story. It would tell the tale of the interplay between epidemic disease, death investigation, and crime.

Historically and today, death investigators have faced special challenges during pandemics. Forensic pathologists might be at risk of contracting COVID-19 from dead bodies. When disturbed, burial sites for epidemic victims produced new outbreaks in the vicinity. This was true for cholera cemeteries in colonial Madras and smallpox graveyards in 19th-century Quebec. The Coroners’ Act of 1871 required inquests for deaths in British Indian prisons – but not if they were due to cholera or other epidemic disease. In establishing necessary safeguards for the health of death investigators, these exceptions created a window for crimes of opportunity.

Of course, epidemic disease could only hide a murder if there was actually an outbreak. In the 1930s, an infamous murder involving the injection of plague bacilli was exposed because its perpetrators got this wrong.

Prison inquest exceptions were just one reason why special kinds of crime could flourish under the cloak of epidemic disease. Another was the fact that there was cholera, and then there was ‘cholera’. State toxicologists in colonial India noted that the symptoms of cholera and arsenic poisoning were hard to tell apart. People dying of both experienced extreme thirst, vomiting and diarrhea. Doctors sometimes ascertained that a death was caused by cholera, only to find that the viscera tested positive for arsenic. Occasionally, the bodies of people whose relatives said they had died of cholera tested positive for arsenic. When a corpse was buried, it could be disinterred and tested, following a tip-off to authorities. Cremation was harder. But sometimes an official at the burning ghat became suspicious of the family’s behaviour and reported it before the pyre was lit. Other times, an incomplete cremation left spongy bone tissue in which arsenic could still be detected.

Our film’s detective would be hounded by the toxicologist’s question: is it disease or poison? “The acute effects of the poison so much resemble an attack of Asiatic cholera,” wrote W J Buchanan, editor of the Indian Medical Gazette, on arsenic around 1905, “that suspicion is unlikely to arise, especially if it happens that cholera is at all prevalent in the neighbourhood at the time.” A toxicology expert in Punjab reported in 1879 that two out of seven suspected cholera victims’ organs submitted to him during an outbreak tested positive for arsenic. Buchanan claimed that peasants used arsenic to dispose of rivals in land disputes during cholera epidemics in Bengal.

In 1900, two health workers were accused of throwing cholera-infected vomit and faeces into a well to spread the disease.

Of course, epidemic disease could only hide a murder if there was actually an outbreak. In the 1930s, an infamous murder involving the injection of plague bacilli was exposed because its perpetrators got this wrong. There was no plague outbreak in 1933 in Calcutta. And only one lab in India – the Haffkine Institute in Bombay – possessed plague bacilli for research. These facts allowed the police to discover the trail by which Benoyendra Chandra Pandey and his bacteriologist sidekick, Taranath Bhattacharjee, had smuggled plague culture from Bombay to Calcutta. On the platform of Howrah train station, a hired man stuck a plague-filled syringe into Pandey’s younger brother, with fatal results.

A detective film about law and epidemics could feature one further species of misadventure. Here, the twist would be that the crime was fabricated: one person would try to frame another for spreading an epidemic disease. Like the false rumors of #CoronaJihad in India today, our film’s accusations would make the framed person the target of violence. There would also be the potential for a wrongful conviction. In fact, it would be poison, not some disease-infected material, that had been planted.

In a 1901 case in Darbhanga and Samastipur (in today’s Bihar), rumours circulated that the village watchmen and members of the Dom caste were scattering plague poison under government orders to cause an outbreak of plague. Townspeople targeted and assaulted these men. But the police then found 11 suspicious packets, and the chemical examiner determined that they were full of urates and uric acid, not the plague. Urates and uric acid are excreted in urine. Could these packets have contained the urine of plague victims? Perhaps, but the fact that over half of the packets contained, according to the chemical examiner, “only uric acid (chemically pure)” suggests that these were planted chemicals and not bodily excreta—and that the men vilified by the rumour were blameless.

Another case involved accusations about a poisoned well in Dinajpur, a district in present-day Bangladesh. In 1900, two health workers were accused of throwing cholera-infected vomit and faeces into a well to spread the disease. However, when the chemical examiner in Calcutta tested the well water, he found not cholera, but arsenic. Was this poison planted to frame the two men, knowing how easily arsenic poisoning could be mistaken for cholera? Or was it the case that in this part of Southasia, where arsenic naturally occurred in the water, no one had planted anything? Instead, could someone have wished the two men harm and started the rumour, or innocently passed it along? Epidemics created opportunities for murder by poison, but also for false rumour and the misidentification of poison already found in nature.

If cholera and plague are the central characters in a detective film on historical pandemics and influenza has a supporting role, then arsenic might be the leitmotif. The takeaway is that the line between disease and poison, as between law and medicine, becomes blurry during global pandemics. As courts are suspended, individual liberties curtailed, and false rumours spread in the COVID-19 sequel, we might want to keep this in mind.

Mitra Sharafi is a legal historian at the University of Wisconsin Law School, USA. She is writing a book on forensic science and falsity in British India.